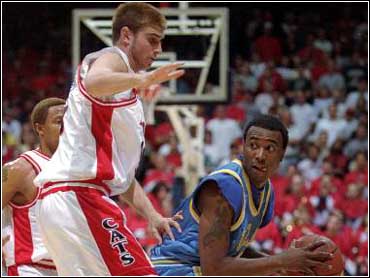 Even with Loren Woods out with back spasms, fourth-ranked Arizona was way too much for the fading UCLA Bruins.

Down to six scholarship players with their 7-foot center on the bench in street clothes, the Wildcats (23-4, 12-1 Pac-10) shot out to a 22-point lead in the first half Saturday and rolled to a 99-84 victory over the bumbling Bruins.

"It was more than a little scary prior to the game when we found out that Loren was not going to be available," Olson said. "I told the guys that everybody had to step up and we had to try to use our quickness to prevent the ball from being pounded inside."

It worked to near perfection in the first half, then the Bruins were so far behind they had no chance of catching up.

UCLA (13-11, 4-8) has lost six of seven and its NCAA tournament chances seem to have evaporated in the desert, where the Bruins were outscored 203-159 in one-sided losses at Arizona State and Arizona.

"I'm really frustrated and disappointed that we didn't come out and give a better effort," UCLA freshman Jason Kapono said. "Coming on this road trip we were pretty confident that we would get a split, and to lose the way we did the past two games is indicative of our season. It seems like every game we are falling behind by a huge margin and it's tough to always play catch-up."

Jason Gardner had 16 points, 11 assists and seven steals for the Wildcats. He was 4-for-8 from 3-point range.

"He did everything that a guy could do," Olson said of his freshman playmaker. "He ran the club. He didn't force things. Other guys could have scored more points than he did today, but no one could play any better than he did."

Gardner's steals, two short of the school recod, came in the first half, when the Bruins committed 17 of their 23 turnovers.

"It looked like we had seven guys out there on defense," Olson said.

All six regulars hit double figures for Arizona, which has won six in a row and has a 27-game Pac-10 homecourt winning streak. UCLA was the last Pac-10 team to beat the Wildcats at McKale Center, three years ago.

"After the ASU game, I don't think they were mentally prepared," Arizona's Gilbert Arenas said.

Arenas scored 23 and Michael Wright 22 for Arizona. Justin Wessel, a 6-foot-8 forward starting in place of Woods, scored 12, including 10-of-10 free throws, before leaving when slammed in the nose with 2:24 to play. Rick Anderson scored 12 and Luke Walton 11.

"All that we've been through so far, this was just another thing," Wessel said. "I was excited. We just had to lean on each other, and we did."

Kapono matched his high game with 27 points for UCLA, including 5-of-9 3-pointers, and Dan Gadzuric added 17, 15 in the second half when UCLA finally got the ball inside to take advantage of Woods' absence. By then, though, it was far too late.

"We are struggling right now," embattled Bruins coach Steve Lavin said. "We have lost six of seven. Three of those losses were to Stanford, Syracuse and Arizona, who are all in the top 10. The other losses are the ones that hurt the most. We are running out of rope. Our backs are against the wall."

The Wildcats used a harassing, quick defense to ignite a 17-5 run to build a 34-19 lead with 4:50 left in the first half. Wessel's two free throws capped the outburst.

Arizona outscored UCLA 8-1 over the final minute of the half to go up 51-30 at the break. Gardner started the run with a 3-pointer and Anderson scored four during the spurt.

UCLA had a 9-0 run, cutting Arizona's lead to 68-53 on Kapono's three-point play with 10:44 remaining, but Gardner's stopped the rally with a 3-pointer. The Bruins cut the lead to 12 in the final seconds against Arizona's seldom-used, non-scholarship reserves.

Even though Woods didn't play, UCLA's two front-line starters, Gadzuric and Jerome Moiso, put up just three shots in the first half. Olson said that was because of his team's tough defense.

"The didn't get it inside because they couldn't," he said.