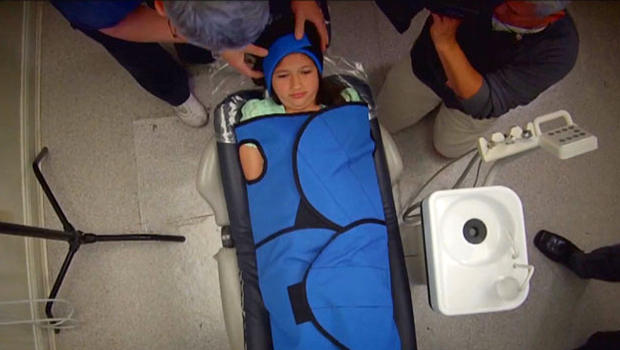 BOSTON -- Some parents claim their kids were tortured and traumatized during a trip to the dentist, and they blame a controversial restraint device, CBS Boston station WBZ-TV reports.

It has created a debate in the dental industry about the best ways to safely provide oral treatment for children, who can already be anxious about an appointment.

Debby Barstow still remembers every detail of her son's trip to the dentist in 2009.

When the 8-year-old's appointment stretched into hours, the Methuen mom grew worried in the waiting room.

Barstow eventually forced her way back into the exam room.

"And I saw my son tied up completely from head to toe in a straitjacket," she recalled. "He was crying with his mouth wired open. It was a horrible nightmare. I was in complete shock that this was even happening to him."

Barstow's son was in a device known as a papoose board, a treatment technique that prevents a child's arms or legs from interfering with the dental treatment.

Other stories around the country have sparked a debate about whether they should be used at the dentist's office.

A California mother said her 7-year-old son was cut and bruised after a dentist restrained him during a procedure.

And in Texas, a 4-year-old girl suffered brain damage while getting her teeth capped. The family claims the dentist strapped her down with a papoose board and also gave her sedatives.

After her son's troubling appointment, Barstow complained to the state Department of Health about the Andover dentist, who has since retired.

"Please stop him before he tortures others," Barstow's handwritten complaint read.

The dentist was eventually placed on a one-year probation for violating the standards of care and administering conscious sedation to a minor patient with a current and valid anesthesia permit, records obtained by WBZ-TV show.

Barstow said the experience had a long-lasting effect on her son.

"My son was terrified," she said. "He was having nightmares at night. I couldn't get him back to another dentist for quite some time."

Dentist Dr. Mark Burhenne agreed the device can seem like torture to children.

Burhenne believes if a patient can't move while a dentist provides oral treatment, he or she would have a tough time telling the dentist if something hurts or it is difficult to breathe.

"There are psychological ramifications after having used that. It's kind of a dental PTSD," Burhenne said.

However, Dr. Steven Perlman, a Lynn pediatric dentist of 40 years, defended the use of papoose boards.

"Immobilization is the safest form of treatment," he said.

Perlman often treats patients who are referred to him with behavioral problems or disabilities. The pediatric dentist prefers the papoose method because he said kids can have unexpected reactions to sedation.

Perlman said it is essential to explain the different treatment options to parents, answer any questions and have them sign a consent form.

The American Academy of Pediatric Dentistry (AAPD) provides guidelines on what it describes as "protective stabilization."

It suggests parental presence in the exam room can help put a child at ease during the process. Parents like Barstow had complained they weren't allowed into the area during the dental treatment.

The AAPD guidelines also say a parent has the right to terminate the use of restraint at any time. While the guidelines describe examples where the procedure can provide safety benefits, they also detail potential risks.

"The use of protective stabilization may lead to potential serious consequences, such as physical or psychological harm, loss of dignity and violation of patient's rights," the guidelines warn.

"I think it will live with him forever and something I will always regret," she said.

Apple warns of security flaw for iPhones, iPads and Macs
Thanks for reading CBS NEWS.
Create your free account or log in
for more features.
View CBS News In
CBS News App Open
Chrome Safari Continue
Be the first to know
Get browser notifications for breaking news, live events, and exclusive reporting.