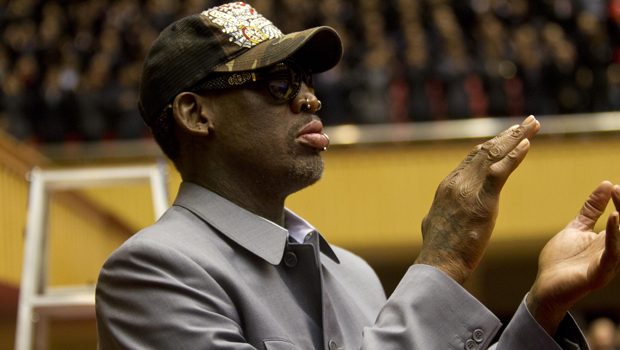 SEATTLE -- The sister of a Washington man imprisoned in North Korea says she's worried that Dennis Rodman, who is in the country to celebrate the birthday of leader Kim Jong Un, is hurting efforts to free her brother.

"Clearly, he's uninformed and doesn't know anything about Kenneth or his detainment. I don't think he has any authority to speak or pass judgment on Kenneth, certainly," Chung said.

In a CNN interview Tuesday, Rodman said he refused to discuss Bae with North Korean leaders and implied Bae may deserve his punishment.

Chung earlier said in a statement, "My family and I are outraged by Rodman's recent comments. He is playing games with my brother's life."

Rodman and other former NBA players played in an exhibition game Wednesday in Pyongyang and Rodman sang a verse from a birthday song to Kim.

Bae's family has tried to reach Rodman or his agent in the past without success, Chung said.

"He made it clear he doesn't want to help. My concern is he's hurting the cause," she said. "He doesn't know what he's talking about."

Bae, 45, was arrested in November 2012 while leading a tour group. He was accused of crimes against the state and sentenced to 15 years hard labor. He was moved to a hospital last summer in poor health.

The State Department has told the family it's doing everything it can, but Chung is not aware of anything in the works.

On Wednesday, the department distanced itself from Rodman and said it did not want to "dignify" his activities or comments in Pyongyang by commenting on them. But spokeswoman Jen Psaki said the department was open to speaking with Rodman on his return.

"We have not reached out to him. We've said before, if he wants to reach out to us, we're happy to hear from him and what he has to say," she told reporters.

Bae was born in South Korea and immigrated to the United States in 1985 with his parents and sister. He attended the University of Oregon and lived in the Seattle suburb of Lynnwood, where his mother, Myunghee Bae, now lives. Chung lives in nearby Edmonds.

Bae was allowed to call home on Dec. 29 because of the holidays, Chung said.

It was the first time his three children from an earlier marriage have spoken to him, she said. He has two in Arizona and another in Hawaii, ages 17, 22 and 23, Chung said.

"He worked there legally. He had official permission to be there. He had business relations," she said.

Nothing was amiss until his arrest, apparently related to his religion, she said.

"He is a man of faith and I'm afraid his Christian faith has been deemed hostile against the state," Chung said.

The family is concerned about his health as well as his freedom. He has diabetes, an enlarged heart and a back injury that prevents him for standing more than 30 minutes at a time. They're glad he's in the hospital, rather than the labor camp, but want him released.

"We want him well and back home," Chung said.