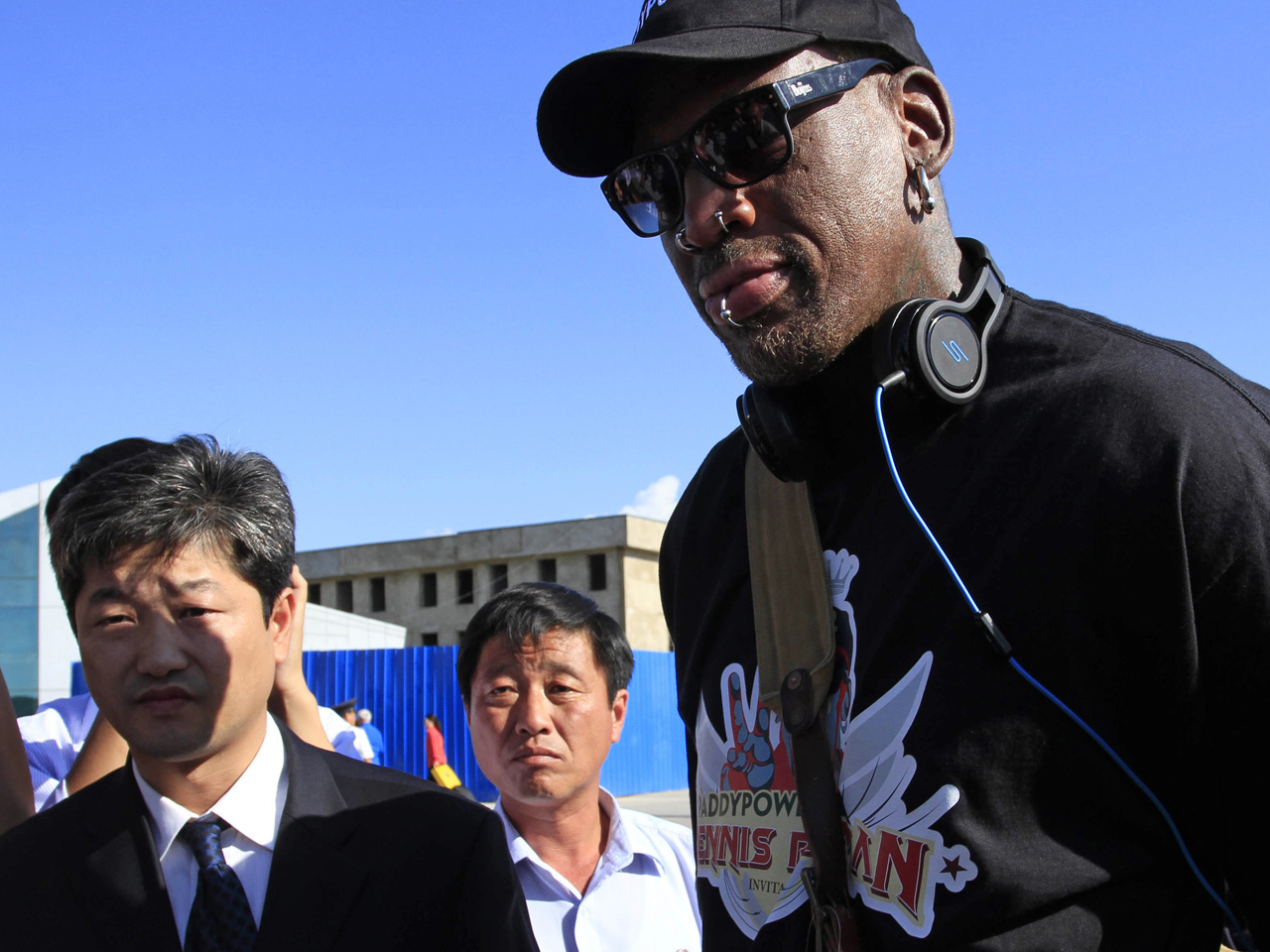 PYONGYANG, North Korea Former NBA star Dennis Rodman landed Tuesday in North Korea for what he called a trip to hang out with authoritarian leader Kim Jong Un, have a good time and bridge some cultural gaps — but not to be a diplomat.

The trip by the flamboyant basketballer — his second to North Korea — comes days after Pyongyang rejected a visit by a U.S. envoy who had hoped to bring home an American missionary jailed there, Kenneth Bae. Speaking to reporters ahead of his flight to Pyongyang, Rodman declined to say whether he would seek Bae's release. "I'm not going to talk about that," he said.

"I just want to meet my friend Kim, the marshal, and start a basketball league over there or something like that," said Rodman, wearing rings through his lower lip and each nostril. "I have not been promised anything. I am just going there as a friendly gesture."

Bae was arrested in November and sentenced to 15 years of hard labor for what Pyongyang described as hostile acts against the state.

Rodman once asked on his Twitter account for Kim to "do me a solid" and release Bae. Rodman called the tweet a direct response to a Seattle Times editorial that dared him to ask Kim for the release if the two are really buddies. Kim has the power to grant special pardons under the North's constitution.

"I'm not there to be a diplomat. I'm there to go there and just have a good time, sit with (Kim) and his family, and that's pretty much it," Rodman said, adding that he planned to see Kim "pretty soon," perhaps later Tuesday or Wednesday.

When asked if he was bringing any of his own brand of vodka to North Korea, Rodman chuckled and said no.

"They love whiskey. They love tequila. They love vodka, stuff like this, so, hopefully we'll go to have a nice dinner, sit there and talk," said Rodman, whose green-dyed hair was showing from beneath a black baseball cap.

Rodman first met Kim — a die-hard basketball fan — during a visit in February to promote the sport and make a film. U.S. officials frowned on the trip for giving the young leader a propaganda boost.

In the weeks that followed, after U.N. sanctions imposed in early March over Pyongyang's February nuclear test, North Korea threatened Washington and Seoul with nuclear and missile strikes and shut down an inter-Korean factory in the North.

Rodman, however, suggested "basketball diplomacy" could warm relations and said that Kim wanted President Obama to pick up the phone and call him. He has called Kim an "awesome guy."

Rodman's trip comes as the rival Koreas pursue diplomacy meant to restart several cooperative projects that were scrapped as tensions rose in recent years, including the jointly run factory complex in the North Korean border city of Kaesong. While there is skepticism about Pyongyang's intentions, the warming ties have been welcomed in Seoul.

Outside analysts have said Pyongyang is likely using Bae as bait to win diplomatic concessions in a standoff over its nuclear weapons program. North Korea denies this.

Pyongyang accuses Bae of trying to establish an anti-Pyongyang base in the North. Friends say Bae was based in a Chinese border city and traveled frequently to North Korea both as a tour operator and to feed orphans.

At least five other Americans have been detained in North Korea since 2009. The others were eventually allowed to leave without serving out their terms, some after clemency missions by prominent Americans, including former presidents Bill Clinton and Jimmy Carter.

Just this past weekend, a planned trip by Robert King, the U.S. envoy for North Korean human rights, fell through after Pyongyang said it couldn't forgive the inclusion of U.S. nuclear capable bombers in recently concluded U.S.-South Korean military drills.

Talks aimed at getting the North to give up what's estimated to be a small cache of nuclear devices, and involving the Koreas, the United States, Japan, China and Russia, collapsed in early 2009. Pyongyang says its weapons are intended to protect itself from a hostile Washington.