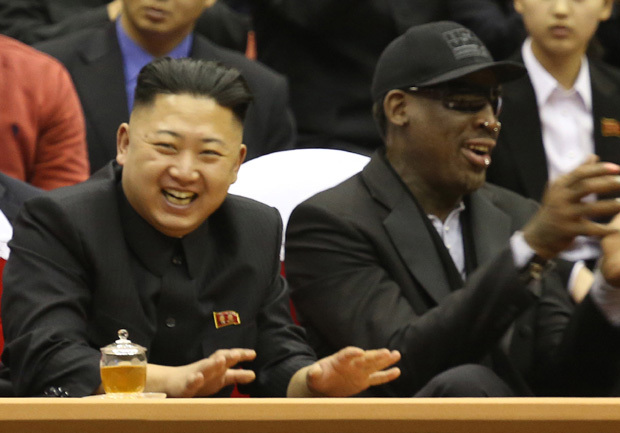 SEOUL, South Korea -- Former NBA star Dennis Rodman is tapping his friendship with North Korean leader Kim Jong Un to ask for the release of a Korean-American man sentenced to 15 years of hard labor in the North.

He later called the tweet a direct response to a Seattle Times editorial that dared him to ask Kim for the release if the two are really buddies.

Rodman visited North Korea in February and sat next to Kim as they watched an exhibition basketball game. His trip came at a time of high tension between Pyongyang and Washington and was not endorsed by the U.S. State Department.

Bae is a tour operator who was arrested in North Korea in November. The North's Supreme Court sentenced him last week for unspecified "hostile acts" against the state. In a Foreign Ministry statement on Sunday, North Korea said the 44-year-old Washington state man entered the country with a disguised identity.

Bae is at least the sixth American detained in North Korea since 2009. The others eventually were deported or released, some after trips to Pyongyang by prominent Americans, including former U.S. presidents Bill Clinton and Jimmy Carter.

North Korea's Foreign Ministry rejected speculation that it was seeking a U.S. envoy to negotiate Bae's release, saying he is not a political bargaining chip.

Analysts have said North Korea may be using Bae as bait to open direct negotiations with the United States over its nuclear arms programs. Bae's sentencing came during a lull after weeks of threats of war from Pyongyang against the U.S. and South Korea.

The U.S. has called for the North to immediately release Bae. It relies on Swedish diplomats in Pyongyang to deal with Bae's case because the North and the U.S. have no formal diplomatic relations after the 1950-53 Korean War ended in a truce instead of a peace treaty.

North Korea has not described the exact nature of Bae's alleged crimes. Friends say Bae is a devout Christian and tour operator based in China who traveled frequently to North Korea to feed orphans.

Rodman said after his trip to North Korea that he planned to return in August to vacation with Kim, a diehard basketball fan.

During his trip to North Korea, Rodman told Kim: "You have a friend for life."