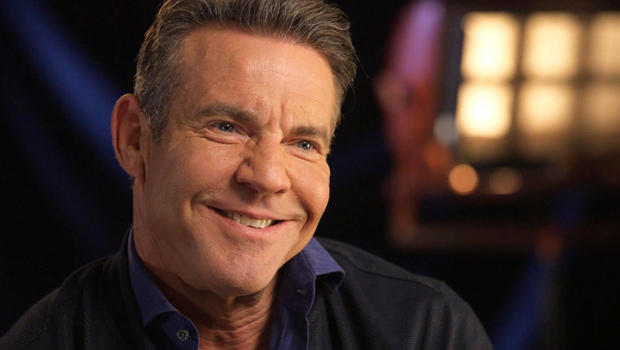 Dennis Quaid played the brash Mercury astronaut Gordon Cooper in the 1983 film “The Right Stuff.” Now he’s starring in a new movie some animal rights activists are saying is the wrong stuff. Tracy Smith questions him about that -- and much more -- for our Sunday Profile:

You might say that Dennis Quaid has been a bit overwhelmed lately.

He’s made more than 70 movies, but few have caused an uproar like this one.

“A Dog’s Purpose” is about the good dogs do for mankind. But all that sentiment took a backseat 10 days ago when a tape surfaced showing what looks like a dog being forced to do a pool stunt during filming.

When asked his reaction from seeing the video, Quaid said, “I was really shocked, to tell you the truth, when I first saw it. And I didn’t like what I saw. But I do know my own experience, when I was on the set, how much care was paid to each and every dog, or every other animal.”

Quaid, who is a dog owner in real life, wasn’t in the water scene and had nothing to do with that part of the production.

“So for people who are saying boycott the film, what would you say?” Smith asked.

“Well, I don’t really think it’s fair, to tell you the truth. And I would never be on a set where dogs were mistreated or abused. I’m getting a little verklempt talking about it. Because it hits me. Dogs hit us in a certain place. You sleep with your dog. You watch TV with them. You take ‘em out in the car. And dogs, I think what they do for us, too, is they remind us of just the wonderful feeling of being alive. Simple as that.”

At 62, the man who spent half of his life in Hollywood still keeps a place in the Texas hill country of Austin (“Yeah, I am a Texan at heart”).

He’s also a rock star at heart. On weekend nights, like this past Friday, he plays local clubs with his band, Dennis Quaid & the Sharks.

He’s not bad with a guitar. But acting has always paid the bills.

Dennis Quaid has created some of the most memorable characters on film, from the charmingly crooked cop in “The Big Easy,” to a rail-thin Doc Holliday in “Wyatt Earp.”

Born and raised in Houston, Quaid thought about becoming a veterinarian. But acting was always in his blood.

“My dad was a frustrated actor,” he said. “And my dad really introduced my brother and I both to acting through the movies.”

Big brother Randy got off to a fast start, making his debut in 1971’s “The Last Picture Show,” and earning an Oscar nomination for his work in 1973’s “The Last Detail.”

But Dennis had a few years of failed auditions before he finally found work.

Smith asked, “A lot of the guys that you started out with have fallen off the radar, and you have endured. Why do you think that is?”

“I have a lot of tenacity, is what it is,” Quaid said. “And then I have an overwhelming capacity for rejection and failure! Fear of failure’s a great motivator. It keeps you going.”

By 1979 he’d found his footing in films like “Breaking Away,” and then in “The Long Riders,” in which the Quaid brothers worked together.

Dennis’ favorite film? “’The Right Stuff.’ Just ‘cause I judge my movies not necessarily by how much money they did or even how good they were or turned out, but how the experience I had when I was making them. And with ‘The Right Stuff’ I had everything. It’s a great film.”

Quaid played his boyhood hero, astronaut Gordon “Gordo” Cooper. “I loved the name Gordo. And I said, ‘If they ever make a movie about this, man, I wanna play Gordo so bad!’ And it was like one of those times in life where, you know, somebody wants it so bad, and it actually happens.”

He was working hard, and partying harder.

Quaid said, “The cocaine days were fun. Yeah, because cocaine, but it was, like, it’s fun. That it’s fun with problems. And then it’s just problems. So it had gotten to the problem stage.”

“I was doing like two grams a day. You know, it was enough, and I was getting, like, an hour sleep a night.”

“You were with Meg Ryan at the time? How much did she help you to kick the addiction?” Smith asked.

“Yeah, she was fantastic. She was so supportive. And in fact, she didn’t even know about [how] I was addicted at the time.”

How did he hide it from her? “Well, addicts are really good at hiding things.”

Since then he’s been a clean and reliable box office star who’s been known to stir up Oscar talk now and again.

“I really don’t, I can’t pay attention to it,” he said. “Sure, it’s nice to win awards and all that. It’s nice that people recognize what you do or whatever. That’s nice. But it’s not the be-all or the end-all. So says the guy who doesn’t have an Oscar!”

Oscar or not, he’s the first to admit how lucky he’s been.

In 2007 Quaid and Kimberly Buffington nearly lost their newborn twins when hospital staff gave them an overdose of blood thinners. Miraculously, the babies survived.

The twins, Thomas and Zoe, were at a family party in Austin last night to honor their grandmother, Juanita, on her 90th birthday.

Quaid calls her his rock, and says she taught him to get through the dark times by keeping his eyes on the light ahead.

Smith asked, “Are you optimistic?”

“Yeah. Yeah, I am. Naturally, I am. I have my moments, but you know, naturally I think I’ve been kind of optimistic. I think better things are always gonna come.”

“And they usually do?”

“If you hang around long enough!”