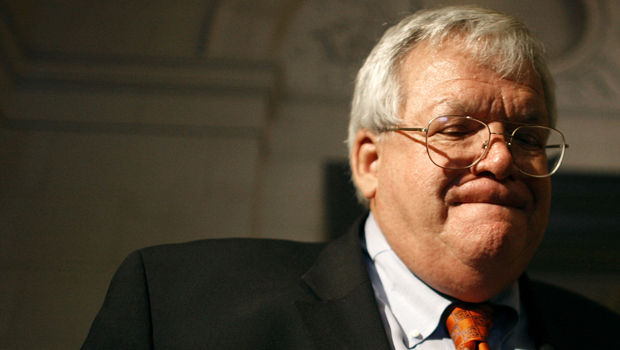 Former U.S. House Speaker Dennis Hastert, under fire for alleged sexual assault and under indictment for breaking federal banking laws and lying to federal investigators, has hired high-powered attorney Thomas Green to provide his legal defense. Hastert will be arraigned in a federal court in Chicago on Tuesday afternoon.

Green is a longtime white-collar criminal defense lawyer and senior counsel at the Washington office of white shoe law firm Sidley Austin. According to a bio on his firm's website, Green has represented clients ensnared in the Clinton-era Whitewater scandal, the Iran-Contra scandal, Watergate, and other prominent national controversies.

A Washingtonian profile over a decade ago on the capital's top lawyers had a colorful description of Green: "If you're in a tough spot and you believe the best defense is a good offense, he's the guy you want. The six-foot, 250-pound former Army artillery officer has been called 'a mean SOB'--and that's by one of his best friends."

Hastert, the longest serving Republican House speaker in history, was indicted last month and charged with violating federal banking laws and lying to FBI investigators. According to the indictment, Hastert agreed to pay $3.5 million in 2010 to a person identified only as "Individual A," in an effort to "compensate and conceal" Hastert's "prior misconduct."

Law enforcement sources told CBS News the misconduct mentioned in court documents refers to sexual misconduct allegations involving a young man that date back more than 30 years. From 1965-1981, Hastert was a popular teacher and wrestling coach in Yorkville, Illinois.

To conceal the allegations of misconduct, prosecutors allege that Hastert withdrew a total of $1.7 million from a number of his personal bank accounts to give to the unnamed individual over a four-year period.

According to the indictment, at first, he took out large amounts -- "$50,000 withdrawals of cash" on 15 occasions. But when "bank representatives questioned" him in 2012, "Hastert began withdrawing cash in increments of less than $10,000" because banks are required by federal law to report anything larger.

In 2014 the FBI questioned Hastert about his withdrawals, and he allegedly lied, telling agents "I kept the cash. That's what I'm doing." He suggested he did not trust the banking system.

Since the allegations of sexual abuse surfaced last month, one more person has come forward alleging that her brother was sexually assaulted by Hastert when the former speaker was a high school teacher. CBS News learned last week that the FBI interviewed as many as three other people in connection with sexual abuse claims.