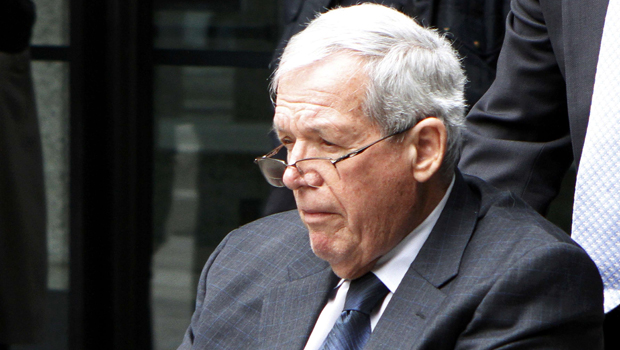 CHICAGO -- The sex abuse victim who testified against Dennis Hastert at the former U.S. House speaker's sentencing hearing said Wednesday that he ultimately decided to do so publicly after Hastert reached out to his brother for a letter of support.

Scott Cross, a 53-year-old businessman who lives in the Chicago suburbs, was on the Yorkville High School wrestling team that Hastert coached in the 1970s. Struggling to hold back tears, Cross walked the courtroom through a chilling account of the abuse and the way the man he trusted fondled him on a locker room table, a situation Cross said he was manipulated into with a promise that a massage would help him lose weight to qualify for a match.

"Because I trusted him, I believed him and took him at his word," he said Wednesday in his victim impact statement. "As a 17-year-old boy, I was devastated."

Scott Cross was known in court documents only as "Individual D."

Hastert was sentenced to 15 months in prison after pleading guilty to violating a banking law as he sought to pay another individual $3.5 million to keep secret that he also had been sexually abused. Hastert also faces sex offender treatment, two years of supervised release after prison and a $250,000 fine that will go to a crime victims fund.

Cross told The Associated Press he had been speaking to federal prosecutors about possibly testifying at the sentencing hearing, but the decision was made when Hastert approached his brother to write a letter of support asking the judge for leniency.

Cross said Hastert first called his brother directly with the request. When he did not respond, Hastert's legal team followed up with another request.

"I hadn't made a decision. That's what compelled me to come forward," Cross said. "It was epic" in the decision, he said.

Tom Cross released a statement Wednesday saying the family is "very proud of Scott for having the courage to relive this very painful part of his life in order to ensure that justice" was done. He added that the family hopes the testimony will encourage other victims of abuse to speak out.

In court, Cross started with heavy sigh, then began explaining that he was a young teenager who dreamed of making Hastert's wrestling team, which had won the state championship just a few years after Cross and his family moved from Chicago.

Cross was chosen to join the team at wrestling camps in Virginia and Colorado and by his senior year, he was team captain.

"I looked up to coach Hastert. He was a key figure in my life," he said.

That year, Cross said, he found himself alone with Hastert in the wrestling team's locker room, which was separate from the school's other athletic facilities.

Hastert was aware that Cross was nervous about making weight for a match the next day and said a massage would help. After giving him a massage, Hastert told Cross to lay on his back, pulled his shorts down and fondled him, Cross said.

Cross jumped up in shock, ran out and never told anyone until recently. He told the court that he continues to suffer, has sleepless nights and has sought professional help.

Hastert acknowledged Wednesday that he "mistreated" some of his athletes. Judge Thomas M. Durkin asked Hastert if that meant he sexually abused Cross.

"I don't remember doing that but I accept (Cross') statement," Hastert said.

Cross said he had no comment on Hastert's sentence: "It's a sad story all around."