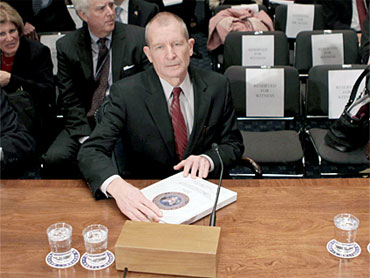 There's probably no graceful way to fire someone, but the Obama administration's dumping of National Intelligence Director Dennis Blair seems to have been particularly graceless.

According to one reliable account, Blair met with the president earlier this week and came away convinced that he was about to be fired. That should have come as no surprise since Washington has been full of leaks about the administration's unhappiness over his performance - the intelligence lapses that made the Christmas Day bombing such a near miss, the turf battles with the CIA, etc.

The White House had so little confidence in Blair that he was under a gag order not to talk to reporters. Blair went back to his office and wrote a memo to the president which argued, in essence, that he was firing him for the wrong reasons.

The memo was blocked by the White House staff before it reached the president. That's what triggered Blair's decision to resign before he was fired.

When the White House found out he was about to announce his resignation, it instantly leaked the story before Blair could tell his staff, just to make sure everybody knew Blair was pushed before he jumped.

David Martin is CBS News' National Security Correspondent. You can read more from him here.
View CBS News In