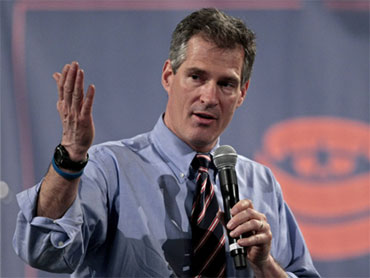 Top Democratic negotiators from the U.S. House of Representatives and the Senate who worked out a deal on a sweeping overhaul of financial regulations regrouped Tuesday to eliminate a $19 billion fee on banks that had threatened to derail the legislation.

The bill's fate was thrown into doubt this week after the death of Democratic Sen. Robert Byrd and after Republican Sen. Scott Brown vowed to abandon his support for the bill if it should retain the assessment on large banks and hedge funds. The money would be used to pay for the costs of the legislation.

"Taxpayers will never again be on the hook for paying for the costs of any future bank failures," a Democratic aide vowed to CBS News.

Uncertainty surrounding the bill raised doubts about Congress' ability to complete the legislation by July 4, a target for both the White House and Democratic leaders. The House was still expected to vote on the bill Wednesday. But Senate Banking Committee Chairman Chris Dodd said he did not expect a vote in the Senate until after a weeklong July 4 break.

Besides Brown, Republican Sens. Olympia Snowe and Susan Collins, both of whom also voted for the Senate bill last month, said they, too, had qualms about the bank assessment that negotiators inserted into the bill last week.

Without Byrd's vote, the support of the three Republicans would be crucial to overcome 60-vote required to overcome a procedural process with which the minority Republicans could defeat the legislation.

Seeing nearly a year of work crumbling, Democrats scrambled to eliminate the bank fee and keep at least three of the Republicans on board.

Dodd, a Democrat, said he ran the proposal past the three Republicans to make sure they would support it. "But obviously until they actually cast a vote, you never know," he said.

Working with the White House and Treasury officials, Democrats replaced the fee with $11 billion that would be freed by ending the government's authority to use the $700 billion bank bailout fund, known as the Troubled Asset Relief Program or TARP.

TARP was scheduled to expire in October. The new proposal would end it as of June 25, essentially cutting Congress' spending authority from $700 billion to $475 billion. That creates an accounting adjustment that would generate $11 billion.

The balance of the cost could be covered by increasing premium rates paid by commercial banks to the Federal Deposit Insurance Corp. to insure bank deposits. The premiums would increase from 1.15 percent of insured deposits to 1.35 percent by September 2020. The additional premium would be paid by banks with assets greater than $10 billion.

"The American taxpayer should be affronted by this little bit of sleight of hand and gamesmanship," said Sen. Judd Gregg, a Republican who is a major player in financial affairs. "What a piece of misleading, misdirected financial management this is."

"This is yet another regulatory cost imposed on the many traditional banks that had nothing to do with causing the financial crisis," ABA President and CEO Edward Yingling said in a statement.

The House Financial Services Committee chairman, Democratic Rep. Barney Frank, who said the new proposal was worked out with Brown, Collins and Snowe, said he preferred the bank fee, which would be assessed on banks with assets greater than $50 billion and hedge funds of more than $10 billion.

"I'm getting caught in the middle of an intra-Republican debate here," he said. "The criticism by the Republican senators was aimed at a provision aimed at satisfying Sens. Snowe, Collins and Brown."

He added: "Why anyone would think that the large financial institutions should not pay the administrative costs, I don't know, but apparently you couldn't get 60 senators."