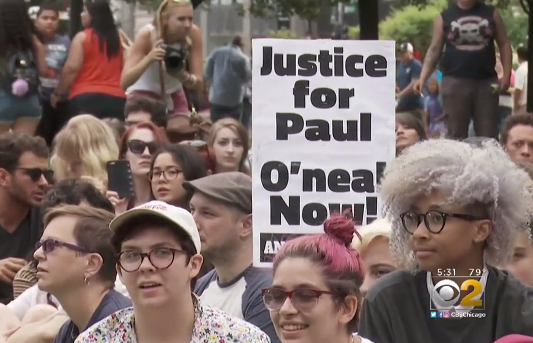 CHICAGO -- For the third day in a row, demonstrators hit the streets of Chicago on Sunday to protest the fatal police shooting of 18-year-old Paul O'Neal, after city officials released body camera and dashcam videos from the incident, CBS Chicago reported.

Sunday afternoon, a group of Chicago high school girls organized a rally at Millennium Park, with about 100 protesters gathering on the lawn at the northwest corner of the park. The same girls organized a sit-in last month following fatal police shootings in Baton Rouge, Louisiana, and a suburb of St. Paul, Minnesota.

Demonstrators said they are disgusted by what they saw in video footage leading up to and immediately following the shooting of O'Neal, as well as what they didn't see.

The Independent Police Review Authority has released video footage from nine cameras -- four from body cameras worn by officers, and five from the dashboard cameras of squad cars at the scene. None of the cameras recorded the fatal shot, and police have said the body camera worn by the officer who killed O'Neal was not working, but that there is no evidence of tampering.

Organizers of Sunday's protest said they were speaking out against police brutality and "systemic oppression."

"We knew they killed him before that, but seeing the videos and seeing how they acted with each other, it just made it seem like our lives don't matter," protest organizer Maxine Wint said.

Observers say officers erred by firing at the car O'Neal was driving as he tried to speed away because department protocols prohibit such a tactic unless a motorist is armed and firing at police.

Critics also have questioned the behavior of police officers at the scene after the shooting, as some appeared to suggest officers turn off their body cameras. Critics also said officers seemed to lack any sense of remorse for having shot O'Neal.

"These adults, the officers that shoot people, everyone in power right now, they don't have to live with the repercussions of this, we do. We have a whole life ahead of us," protest organizer Eva Lewis said.

After their rally at Millennium Park, the protesters planned to march through the streets of Chicago, but have not said exactly where they plan to go.

Chicago Police Supt. Eddie Johnson has said the department is examining how it might retrain officers in the wake of the O'Neal shooting.

Johnson immediately stripped three officers of their police powers after reviewing the circumstances of O'Neal's shooting. He declined comment on specific actions of the officers, citing investigations.