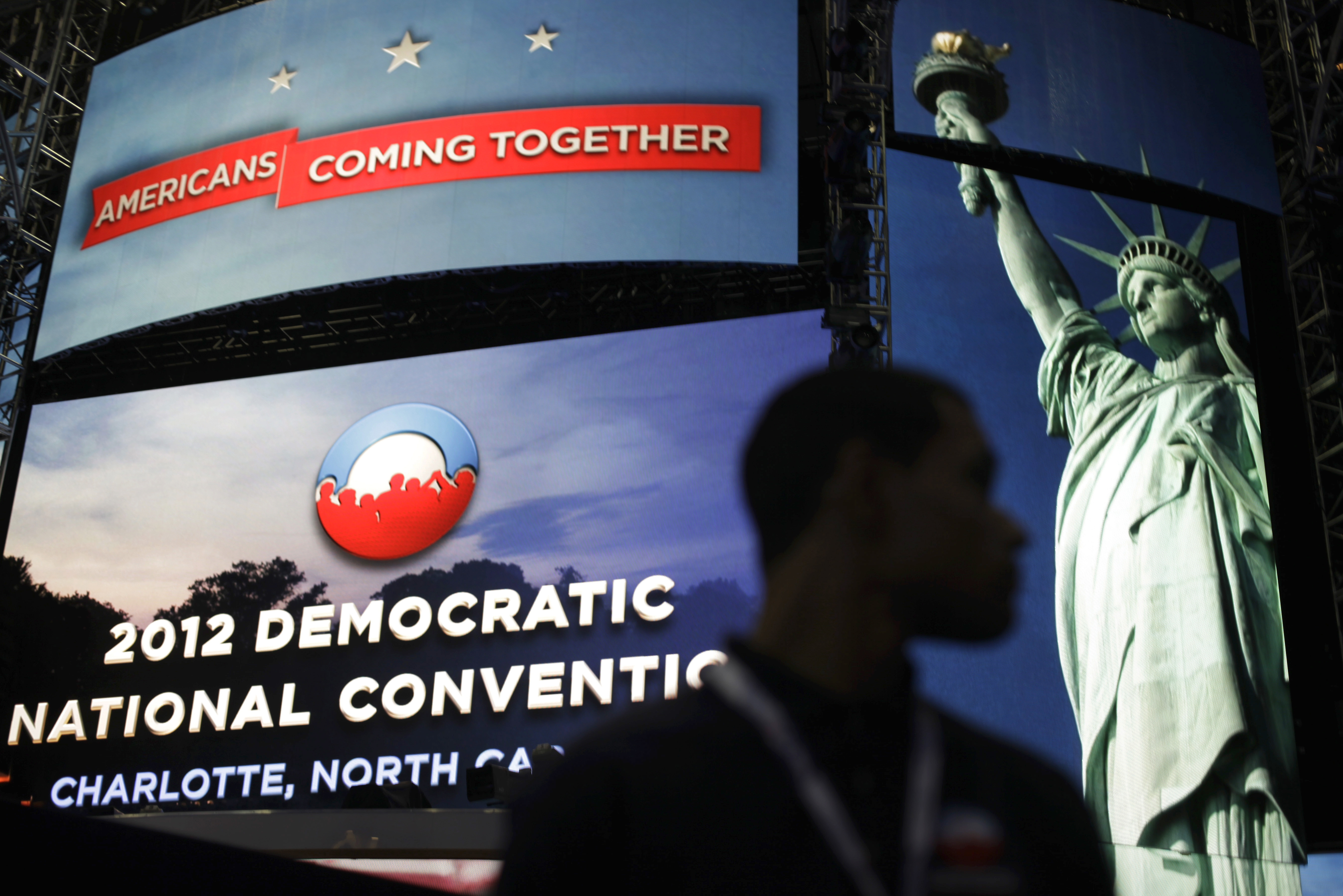 Delegates will vote Tuesday to adopt the platform that reflects the president's argument that his work is unfinished and he deserves another four years to complete the job.

"Today, our economy is growing again, al-Qaeda is weaker than at any point since 9/11, and our manufacturing sector is growing for the first time in more than a decade. But there is more we need to do, and so we come together again to continue what we started," the platform said.

The document is a sharp contrast from the policy statement that the Republican Party adopted at its convention last week. The Republican plan would ban abortion and gay marriage, repeal Obama's health care overhaul law and shift Medicare, the government health care program for the elderly, into a voucher-style program.

"This election is not simply a choice between two candidates or two political parties, but between two fundamentally different paths for our country and our families," the Democrats said.

The Democratic platform calls for extending the middle-class tax cuts for the 98 percent of American families who make less than $250,000 a year, and makes a promise not to raise taxes on them. The platform claims a typical family has saved $3,600 during Obama's first term. "Now he's fighting to stop middle-class families and those aspiring to join the middle class from seeing their taxes go up and to extend key tax relief for working families and those paying for college, while asking the wealthiest and corporations to pay their fair share," the platform says.

The Republican platform would extend the Bush tax cuts of 2001 and 2003, pending reform of the tax code. It also says the party would try to eliminate taxes on interest, dividends and capital gains altogether for lower- and middle-income taxpayers. It also would work to repeal the estate tax and the alternative minimum tax.

The Democratic platform states that it "unequivocally" supports Roe v. Wade, the Supreme Court decision that made abortion legal, and "supports a woman's right to make decisions regarding her pregnancy, including a safe and legal abortion, regardless of ability to pay."

The platform states: "Abortion is an intensely personal decision between a woman, her family, her doctor and her clergy; there is no place for politicians or government to get in the way."

The Republican Party platform bans abortion in all cases, even rape, incest and when the life of the mother is endangered. Republicans say "the unborn child has a fundamental individual right to life which cannot be infringed." It opposes using public revenues to promote or perform abortion or to fund organizations that perform or advocate abortions.

The Democratic platform supports the movement to get equal treatment under the law for same-sex couples.

The platform says: "We also support the freedom of churches and religious entities to decide how to administer marriage as a religious sacrament without government interference." The platform opposes "federal and state constitutional amendments and other attempts to deny equal protection under the law" to same-sex couples.

The Republican Party platform affirms the rights of states and the federal government not to recognize same-sex marriage. It backs a constitutional amendment defining marriage as the union of one man and one woman.

The platform states that "Democrats are strongly committed to enacting comprehensive immigration reform." Immigration overhaul would include bringing "undocumented immigrants out of the shadows," requiring illegal immigrants "to get right with the law, learn English and pay taxes" to get on a path toward citizenship. It also calls for a visa system that meets the country's "economic needs, keeps families together and enforces the law." It acknowledges that administrative fixes are not permanent. "Only Congress can provide a permanent, comprehensive solution."

The Republican platform opposes "any form of amnesty" for those who intentionally violate the immigration laws, demands a halt to Justice Department lawsuits against states that have enacted tough immigration measures, would deny federal funding to universities that provide lower in-state tuition rates to illegal immigrants and advocates making English the official national language.

Democrats say the new health care law makes Medicare stronger by adding new benefits, fighting fraud and improving care for patients. It notes that nearly 50 million older Americans and those with disabilities rely on Medicare. Over 10 years, the law will save the average Medicare beneficiary $4,200, the platform says. "Democrats adamantly oppose any efforts to privatize or voucherize Medicare," the platform says.

The Republican platform pledges to move Medicare away from "the current unsustainable defined-benefit entitlement model to a fiscally sound defined-contribution model." It supports a Medicare transition to a premium-support model with an income-adjusted contribution toward a health plan of the enrollee's choice.

The Democratic platform criticizes the Supreme Court's Citizens United decision, which lifted restrictions on independent political expenditures by corporations and unions, and calls for "immediate action to curb the influence of lobbyists and special interests on our political institutions" - with a constitutional amendment, if necessary, in the cause of campaign finance reform.

"We support requiring groups trying to influence elections to reveal their donors so the public will know who's funding the political ads it sees," the platform says.

The Republican platform supports the Citizens United decision as a free speech issue.

The platform pledges to continue building on the new health care law. It says accessible, affordable, high-quality health care is part of the American promise, that Americans should have the security that comes with good health care, and that no one should go broke because they get sick. "No law is perfect and Democrats stand willing to work with anyone to improve the law where necessary, but we are committed to moving forward," the platform says.

The Republican platform says that a Republican president on his first day in office would use his waiver authority to halt progress in carrying out the health care reform act. It calls for a Republican plan based on improving health care quality and lowering costs and a system that promotes the free market and gives consumers more choice.

The platform says Democrats have responsibly ended the war in Iraq, put the al-Qaida terrorist organization on the path to defeat with the killing of Osama bin Laden and reversed the Taliban's momentum to set the stage for the drawdown of U.S. forces in Afghanistan.

"As a consequence of the president's decisions and the brave work of our military and intelligence professionals, bin Laden can no longer threaten the United States and al-Qaida's senior leadership has been devastated, rendering the group far less capable than it was four years ago," the platform said. "The al-Qaida core in Afghanistan and Pakistan has never been weaker."

Democrats back further reductions in the nuclear weapons stockpile, building on the hard-fought U.S.-Russia treaty that Obama got through the Senate in December 2010. Democrats also say they have an "unshakable commitment to Israel's security," and Obama will do all in his power to prevent Iran from acquiring a nuclear weapon.

Democrats say they want to maintain a strong military, but argue that in the current fiscal environment, tough budgetary decisions must include defense spending. They noted that Democrats and Republicans agreed last summer in the deficit-cutting plan to reduce military spending.

Republicans, in their platform, criticize the Obama administration as holding weak positions toward such countries as North Korea, China and Iran and for reductions in military spending.