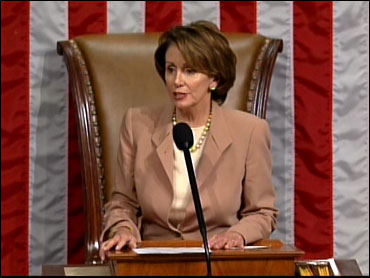 This column was written by William Kristol & Frederick W. Kagan.

Let's give congressional Democrats the benefit of the doubt: Assume some of them earnestly think they're doing the right thing to insist on adding to the supplemental appropriation for the Iraq war benchmarks and timetables for withdrawal. Still, their own arguments — taken at face value — don't hold up.

Democrats in Congress have made three superficially plausible claims: (1) Benchmarks and timetables will "incentivize" the Maliki government to take necessary steps it would prefer to avoid. (2) We can gradually withdraw over the next year so as to step out of sectarian conflict in Iraq while still remaining to fight al Qaeda. (3) Defeat in Iraq is inevitable, so our primary goal really has to be to get out of there. But the situation in Iraq is moving rapidly away from the assumptions underlying these propositions, and their falseness is easier to show with each passing day.

(1) The Iraqi government will not act responsibly unless the imminent departure of American forces compels it to do so. Those who sincerely believe this argument were horrified by the president's decision in January to increase the American military presence in Iraq. It has now been more than 10 weeks since that announcement — long enough to judge whether the Maliki government is more or less likely to behave well when U.S. support seems robust and reliable.

In fact, since January 11, Prime Minister Nouri al-Maliki has permitted U.S. forces to sweep the major Shiite strongholds in Baghdad, including Sadr City, which he had ordered American troops away from during operations in 2006. He has allowed U.S. forces to capture and kill senior leaders of Moktada al-Sadr's Mahdi Army — terrifying Sadr into fleeing to Iran. He fired the deputy health minister — one of Sadr's close allies — and turned a deaf ear to Sadr's complaints. He oversaw a clearing-out of the Interior Ministry, a Sadrist stronghold that was corrupting the Iraqi police. He has worked with coalition leaders to deploy all of the Iraqi Army units required by the Baghdad Security Plan. In perhaps the most dramatic move of all, Maliki visited Sunni sheikhs in Ramadi, the capital of Anbar province and formerly the base of al Qaeda fighters and other Sunni Arab insurgents against his government. The visit was made possible because Anbar's sheikhs have turned against al Qaeda and are now reaching out to the government they had been fighting. Maliki is reaching back. U.S. strength has given him the confidence to take all these important steps.

(2) American forces would be able to fight al Qaeda at least as well, if not better, if they were not also engaged in a sectarian civil war in Iraq. The idea of separating the fight against al Qaeda from the sectarian fighting in Iraq is a delusion. Since early 2004, al Qaeda in Iraq (AQI) has sought to plunge Iraq into sectarian civil war, so as to critically weaken the government, which is fighting it. AQI endeavors to clear Shiites out of mixed areas, terrorize local Sunnis into tolerating and supporting AQI, and thereby establish safe havens surrounded by innocent people it then dragoons into the struggle. Now, heartened by the U.S. commitment to stay, Sunni sheikhs in Anbar have turned on AQI. In response, AQI has begun to move toward Baghdad and mixed areas in Diyala, attempting to terrorize the locals and establish new bases in the resulting chaos. The enemy understands that chaos is al Qaeda's friend. The notion that we can pull our troops back into fortresses in a climate of chaos — but still move selectively against al Qaeda — is fanciful. There can be no hope of defeating or controlling al Qaeda in Iraq without controlling the sectarian violence that it spawns and relies upon.

(3) Isn't it too late? Even if we now have the right strategy and the right general, can we prevail? If there were no hope left, if the Iraqis were determined to wage full-scale civil war, if the Maliki government were weak or dominated by violent extremists, if Iran really controlled the Shiites in Iraq — if these things were true, then the new strategy would have borne no fruit at all. Maliki would have resisted or remained limp as before. Sadr's forces would have attacked. Coalition casualties would be up, and so would sectarian killings. But none of these things has happened. Sectarian killings are lower. And despite dramatically increased operations in more exposed settings, so are American casualties. This does not look like hopelessness.

Hope is not victory, of course. The surge has just begun, our enemies are adapting, and fighting is likely to intensify as U.S. and Iraqi forces begin the main clear-and-hold phase. The Maliki government could falter. But it need not, if we do not. Unfortunately, four years of setbacks have conditioned Americans to believe that any progress must be ephemeral. If the Democrats get their way and Gen. Petraeus is undermined in Congress, the progress may indeed prove short-lived. But it's time to stop thinking so hard about how to lose, and to think instead about how to reinforce and exploit the success we have begun to achieve. The debate in Washington hasn't caught up to the realities in Baghdad. Until it does, a resolute president will need to prevent defeatists in Congress from losing a winnable war in Iraq.