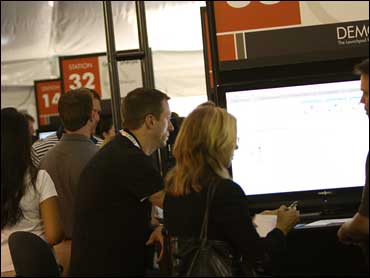 Since 1991, technology insiders have been gathering at the Demo conference to get a glimpse of just-announced products from both start-ups and established companies.

This year's Demo takes place in Palm Desert, Calif., Monday and Tuesday, March 2 and 3. (You can view the conference's agenda here.)

Demo Executive Producer Chris Shipley gave me a sneak preview of what to expect, including a new screen capture product from Citrix Online (of GoToMyPC); some "hard core development platforms"; and consumer technologies, including a live streaming Web service for individuals from Avaak.

There will also be a new netbook computer "that fits in a space between an iPhone and a laptop," and a product that is "putting a financial framework around your home," helping you manage that asset.

And one company is, quite literally, a life saver: Silverstone Solutions will introduce technology to make it easier for people needing kidney transplants to find matches.

The economy, says Shipley, will result in a Demo that is "more concentrated," which is a nice way to say that it's smaller than the Demo held six months ago. Reasons include companies going belly-up as well as others that have had to delay their product launches because of cutbacks in engineering resources.

Still, said Shipley, it's a "great time to be innovating in the marketplace. It's a time to be putting products to market that are about helping people do more with less."She adds that "It's still a flight to quality."

While Demo isn't nearly as large or glitzy as the Consumer Electronics Show, it's a lot more fun to cover, because what it lacks in size, it makes up for in heart and soul. It's a chance to meet with entrepreneurs who - in some cases - are putting everything on the line to try to realize their dream.

Some, like the founders of Palm, may get wealthy from their efforts. Others will go on stage, announce their products and soon find themselves having to shut their doors. And, being entrepreneurs, some of them will come back to another Demo to try again.

Even during good years, launching a tech product is a risky business. In a recession, it's an act of faith.

CNET News (a CBS company) will have extensive coverage of the show on the Web and on Twitter. I'll be blogging and Twittering (or is it "Tweeting"?) at the show along with my CNET colleagues Rafe Needleman and Daniel Terdiman.
By Larry Magid