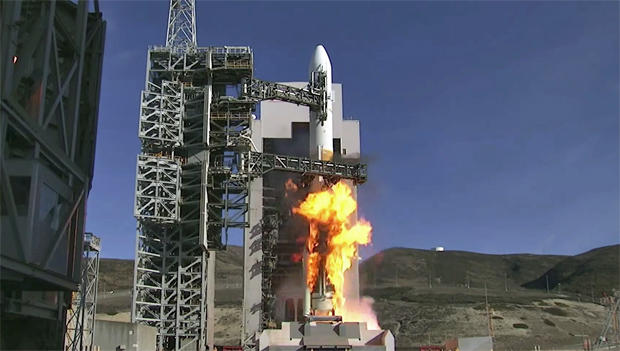 Five days after a presumed spy satellite was lost following launch from Florida, another clandestine satellite, this one owned by the National Reconnaissance Office, was boosted into space Friday from Vandenberg Air Force Base in California.

Running a day late because of glitches with ground systems, the United Launch Alliance Delta 4 rocket carrying the classified NROL-47 spacecraft lifted away from launch complex 6 at 2:11 p.m. PST (GMT-7; 5:11 p.m. EST) and quickly shot away to the south over the Pacific Ocean.

Consuming nearly 2,000 pounds of liquid propellant per second, the 220-foot-tall rocket rapidly accelerated as it climbed out of the thick lower atmosphere, discarding the strap-ons about one minute and 40 seconds after liftoff. A minute and a half after that, now more than 60 miles up and traveling at more than 5,000 mph, the protective nose cone fairing was jettisoned, exposing the satellite to the space environment.

At that point, in keeping with standard practice for classified missions, United Launch Alliance ended its coverage and the rest of the flight was carried out in secrecy.

This was the 36th flight of a ULA Delta 4 rocket and the first since last March. ULA, a partnership between Boeing and Lockheed Martin, also builds Atlas 5 rockets, which flew six times last year. Two hours after Friday's launch, ULA confirmed a successful flight, boosting the company's record to 124 successful flights in a row, including 27 for the NRO.

As usual with classified payloads, no details about the NROL-47 satellite were released. But spy satellites launched into polar orbits are typically used for photo or radar reconnaissance, able to observe targets anywhere in the world as the planet rotates below.

Ted Molczan, a respected independent satellite analyst, said the Delta's payload may be the latest Future Imagery Architecture radar satellite, capable of "seeing" the ground at night and through cloud cover. Four such satellites, built by Boeing, are believed to be already in orbit.

But the speculation about NROL-47 is just that, and Molczan says the satellite could be something else entirely because analysis of launch safety notices indicates the payload may be bound for a different orbit than the one used by earlier FIA radar satellites.

ULA's webcast launch commentator did not mention the satellite beyond its name and as usual for classified missions, the company ended its coverage after payload fairing jettison. The NRO publicized the launch with generic tweets, saying the mission was the first of two planned by the agency this year. But no other details were provided.

The same policy was in place last Sunday when SpaceX launched a classified satellite known as Zuma atop a Falcon 9 rocket from Cape Canaveral. Commentary ended during the second stage firing and no details about the satellite, it's owner, capabilities or intended orbit, were released.

The spacecraft, built by Northrup Grumman, apparently was lost in a post-launch mishap of some sort, sources said, but SpaceX said in a statement Tuesday that a review of telemetry showed the Falcon 9 operated normally.

Who is Aleksandr Kogan?
William Harwood