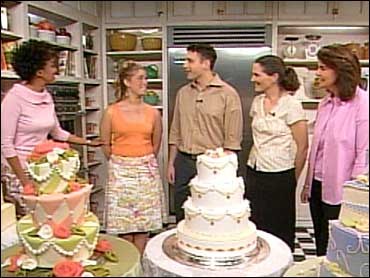 Soon The Wedding in a Week series will end with Marc Stein and Melissa Rihn saying their "I do's" live on The Early Show plaza Friday morning.

But on Thursday, they chose one of the most delicious parts of the wedding: the cake.

Cake designer and baker Polly Schoonmaker, who runs Polly's Cakes in Portland, Ore., designed five very different wedding cakes for the couple. The Early Show invites you, the viewer, to let us know which will best suit the couple's style. Participate in our poll from noon to midnight /ET. Results of the poll will be revealed on The Early Show.

When a couple comes to Schoonmaker looking for a cake, she says, "they're looking for a chance to express their style and also chance for me to interact with them and sort of interpret that style."

Antonia van der Meer, editor-in-chief of Modern Bride magazine, who has been with the couple throughout the selection process, adds, "You want to consider your reception site, how formal your wedding is, even consider what your gown looks like. The cake can totally represent your personality."

The following are the cakes featured on the show along with Schoonmaker's explanations:

Square Art Deco Cake - Says Schoonmaker, "It's simple, chic and definitely for an urban wedding. I think of it in a grand space, library, grand hotel - very, very simple. Doesn't have to be white anymore to be a wedding cake. I have seen a lot of pink and cocoa going around, and I'm thinking about what about cream and chocolate as a bride and groom, yin-yang kind of look. It's very classic."

Whimsy Cake - "Playful," is how Schoonmaker describes it. "It is absolutely a counter to a classic space, but like a precious little piece of furniture, it just stands on its own. It makes people smile. Great for when you're cutting the cake. You can't help but have a huge grin. The voluptuous pearls are very bridal."

White Classic Cake – "This one is a graceful, classic, almost modern renaissance," says Schoonmaker. "Weddings are a chance to wear jewelry and so I'm celebrating the idea of necklace garland, precious gems and just very delicate."

Blue Slice Cake - "This is basically a cake about cake," says Schoonmaker. "It's the whimsy sliced cake. It's precut so the caterers are thrilled. Even the cake plate is edible. It's made out of cake. And it's just a chance to use a lot of designs. Do you want swirls, polka dots, roses? You can have it all."

Pink Buttercream Cake - Says Schoonmaker, "This is just a summer sort of cake - sexy, got curves, pink, with delicate dogwood. It is great in a summer garden. But iut also could work with interiors, elegant."

Groom's Cake - Schoonmaker says, "This is a big trend right now. Not all grooms are as opinionated as Marc. So this is their one spot to shine and it can reflect a hobby."

Inside this groom's cake is tiramisu, so Schoonmaker's advice is to take a small bite on the wedding day because, "you'll need to smile."

So far, Marc likes the Whimsy cake best, saying, "I love it because this is very Dr. Seuss and I love this. You know, very 'Cat in the Hat' and so it's my personality."

As for Melissa, she says she likes the Sliced Cake. Marc's comment? "I could go for that, too, because that's also a Dr. Seuss cake," he says.

You can express your view from noon to midnight in our Wedding in a Week poll.

Other items selected, thus far, have been: The menu for the rehearsal dinner, the flowers and tabletop decorations for the reception and the band.

The couple was busy on Wednesday meeting with one of New York's premiere groups, the Hank Lane Band to select the music for their reception.