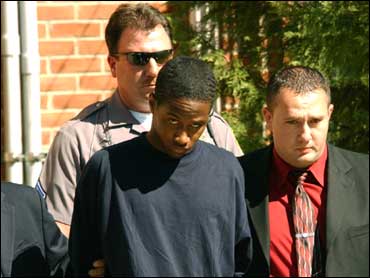 Police arrested an 18-year-old man in the shooting of two students at Delaware State University, authorities said Monday. As they led him into a courthouse, he told reporters: "I'm sorry."

Loyer D. Braden was charged with attempted murder, assault and reckless endangerment, as well as a gun charge, according to court documents.

A justice of the peace set bail at $60,000 and ordered him to stay away from the victims and Delaware State. There was no immediate indication if Braden was a student there.

In response to reporters' questions, Braden softly said, "I'm sorry." Asked what he was sorry for, he replied only, "She's in the hospital."

A wounded student, Shalita Middleton, 17, was being treated for abdominal wounds. University spokesman Carlos Holmes said Middleton had not been questioned and "will not be questioned until we get clearance from the physicians."

The other wounded student has been talking with police, officials said, but his mother said the 17-year-old does not know who the gunman was or what led to the shooting.

Nathaniel Pugh III told his mother he had gone to a campus dining hall that stays open until 3 a.m. He said he heard two gunshots about 1 a.m. and started running. A third shot caught him in the ankle, shattering two bones, said his mother, Michelle Blackwell.

"He didn't see who shot him, but there were several students gathered there on the campus who could have seen who shot him," Blackwell told The Washington Post.

"He was in the wrong place at the wrong time. Period," she said.

Braden was also accused of firing at a third student, James Richmond, according to the documents describing the reckless endangerment charge.

University officials have said some kind of tension between students set off the attack early Friday and they planned a campus-wide meeting.

Mindful of the Virginia Tech massacre in which 32 people were killed in April, Delaware State administrators ordered a swift shutdown of the campus after the shooting. They directed students to stay in their dorms, posted notices on buildings and the school Web site, and lowered gates while police searched for the gunman.