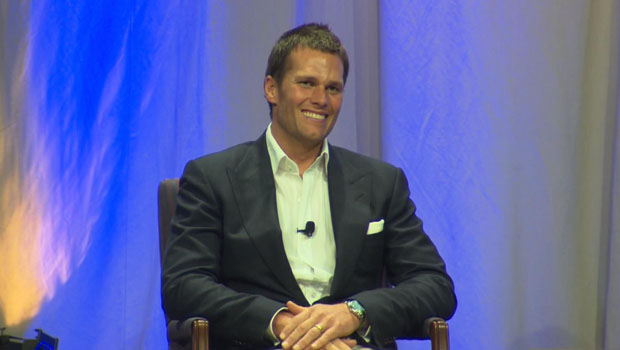 SALEM, Mass. --A day after an NFL investigation found probable cheating in the AFC Championship, New England Patriots quarterback Tom Brady dodged questions about the controversy which has come to be known as "Deflategate."

A 243-page report released Wednesday found that Patriots employees violated the league rules covering game balls -- and that Brady was "at least generally aware" of the plans to under-inflate the footballs to his liking.

At a previously scheduled question-and-answer session Thursday night at Salem State University, Brady told sportscaster Jim Gray he was still closely reviewing the investigation's conclusions and wanted to withhold commenting directly until that process was complete.

Brady admitted that the last few months have been stressful, but that his family, friends and the team's fans have provided "unconditional" support.

"Life so much is about ups and downs; you take the good with the bad," Brady said. "We'll get through this."

Asked if the controversy has dampened his joy over the Patriots' 2015 Super Bowl win, Brady responded, "No. Absolutely not."

"The resulting report does not contain a significant amount of Tom's testimony, which provides much context to the conclusions that were reached by the Wells team investigators," Yee told CBS News in a phone interview.

The report appears to contradict Yee's claim; it contains at least 10 references to Brady's testimony, including the quarterback's response to the charges.

"Brady denied any knowledge of or involvement in any efforts to deflate game balls after the pregame inspection by the game officials," investigators wrote. According to investigators, the quarterback declined to provide his emails and texts.

The report found some of Brady's claims were "implausible," adding: "It is unlikely that an equipment assistant and a locker room attendant would deflate game balls without Brady's knowledge and approval."

"It is not a big deal at all to us in the fraternity that played," former Patriots quarterback Scott Zolak said.

Zolak is now a radio host for CBS Boston station WBZ, and thinks Brady knew the footballs had been manipulated.

"I don't think he ordered the Code Red, said, 'Hey, you're going to do that,'" Zolak said. "But [rather], 'You guys know how I like these balls prepped on a weekly basis. Make sure when that game kicks off, that's the way they are.'"

Zolak says the report may look bad to the public, but that it's an open secret that players push boundaries.

"This is all to do about nothing," Zolak said. "You are using the term 'cheat.' I think there is a fine line between cheating and gamesmanship."

"Deflategate" might do what none of the other controversies and near-misses could: tarnish the legacy of Brady, a four-time Super Bowl champion and the title game's reigning MVP.

"What I see is that he goes from being 'Tom Perfect' to 'Tom Not-So-Perfect' in some people's eyes," Marc Ganis, president of sports business consulting firm SportsCorp, said Wednesday after the report was made public.

The NFL has not said when it will announce a possible punishment for Brady.

The Patriots did not respond to a request for a comment from Brady or coach Bill Belichick, who was exonerated in the report. The team canceled a previously scheduled availability for Thursday.