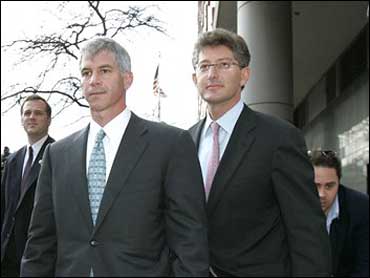 Lawyers for former Enron bosses Kenneth Lay and Jeffrey Skilling got their chance to strike back against former Enron CFO Andrew Fastow, the government's star witness in the case of the failed energy giant.

A lawyer for former Enron Corp. chief Jeffrey Skilling questioned Monday the authenticity of a list of improper side deals Fastow used in his testimony last week.

Fastow said he created the document, a list dubbed Global Galactic, to keep track of Enron's assurances that Fastow-run partnerships would not lose money on deals with Enron.

Fastow testified that Skilling personally approved some of the side deals. He added that Enron's top accountant assured him Skilling had approved all the deals on the list.

Fastow has said he destroyed the original Global Galactic document, but that a copy turned up in 2004, tucked into a folder in a safe-deposit box maintained by Fastow and his wife.

"Is there some possibility, sir, that later on, having perhaps lost or tossed out the original, you went back and recreated or reconstructed the list?" Skilling attorney Daniel Petrocelli asked Monday.

The line of questioning came on Fastow's fourth day on the witness stand. Petrocelli said Thursday he was finished with his cross-examination, but said Monday morning he had additional questions.

Petrocelli also asked Fastow whether he was "100 percent certain" that the initials on the document belonged to Fastow and Richard Causey, the former top accountant at Enron.

"I recall being there when Mr. Causey initialed them, seeing him do that," Fastow said.

The government claims the deals with Fastow's partnerships, known as LJMs, allowed Enron to shed poorly performing assets and improve the bottom line — with secret promises to LJM that Enron would buy them back at a premium.

Fastow has testified Lay knew the company faced massive losses and weakening finances when he made rosy public statements about its strength in the months before its 2001 collapse.

He said Lay had plenty of behind-the-scenes briefings about the company's increasingly dire financial condition when the founder touted its strength in the months before it crumbled into bankruptcy protection.

The two men counter that there was no fraud at Enron, and negative publicity and obliterated market confidence fueled its failure.

Fastow pleaded guilty in January 2004 to two counts of conspiracy for using the partnerships to help Enron manipulate earnings while skimming millions for himself on the side from other schemes. He portrayed himself as a cog in a corrupt machine that went to the top of Enron's corporate hierarchy.

While Fastow didn't say explicitly that Lay lied, he said the company founder made false and misleading public statements to investors and employees either directly or through business media.

"I was trying to keep up the deception as well," Fastow told jurors.

Specific meetings Fastow described included a gathering of top executives in August 2001 shortly after Lay resumed as CEO upon Skilling's abrupt resignation, in which Lay and other top executives heard that Enron would fall far short of Wall Street expectations for the third quarter.

Fastow said he also had given Lay a rundown of huge looming writeoffs because international assets were overvalued by as much as $5 billion; a massive accounting error that would force a $1.2 billion writedown in shareholder equity; and deterioration of financial structures that Enron had used to mask losses from weak assets.

More meetings followed, including one with executives from Goldman Sachs & Co. during which Fastow and Lay discussed restructuring options, though nothing came of them. Fastow said he chose the brokerage because it wasn't among Enron's lenders, who might have cut off the financial spigot if they knew how bad things were.

Yet Lay insisted publicly that the company was fundamentally sound, Fastow said.