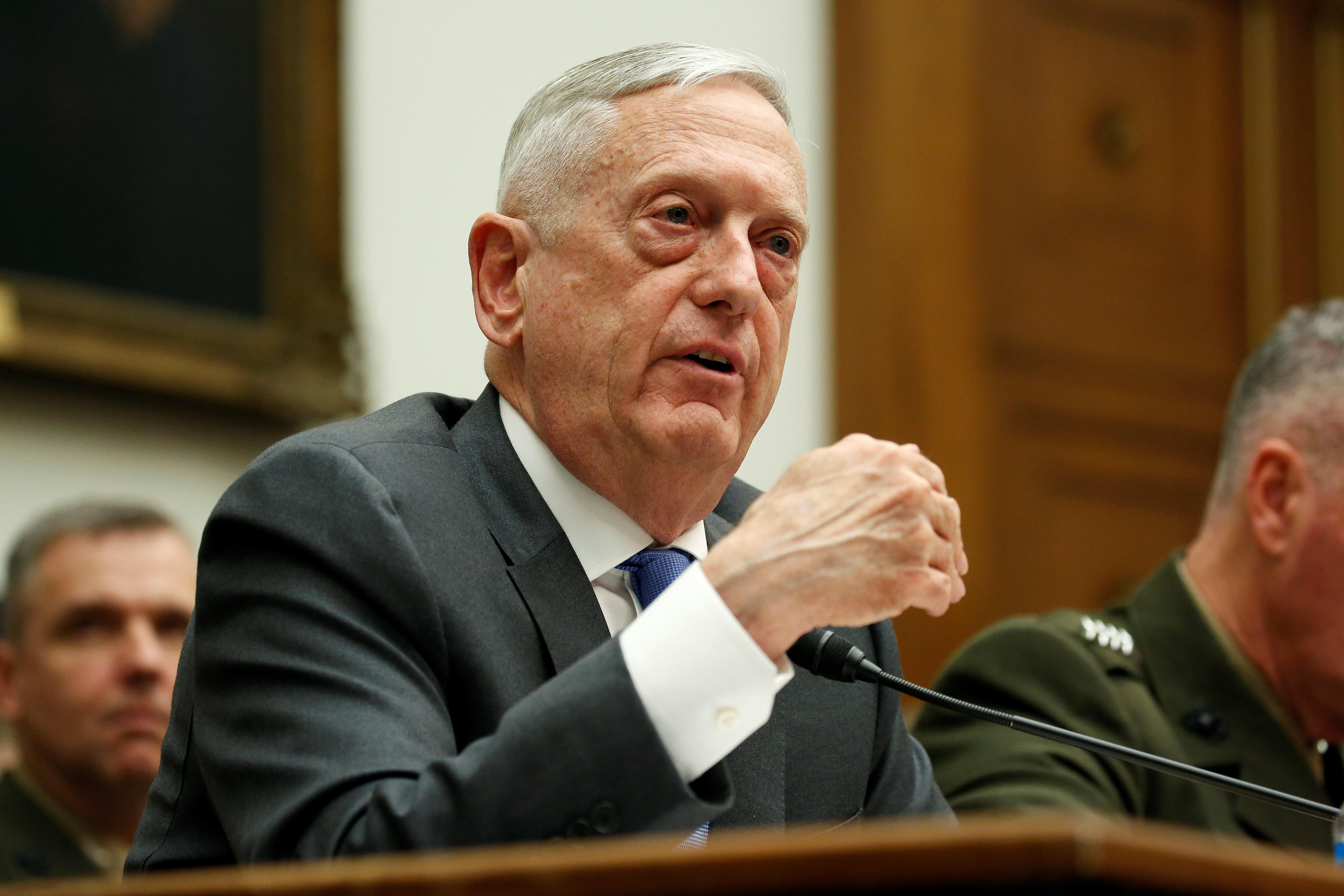 Defense Secretary James Mattis told Congress Thursday that he couldn't talk about military plans for retaliation against Syria  because an attack "is not yet in the offing." While Mattis said that he believes Syrians used chemicals in an attack on Douma last Saturday, chemical weapons inspectors have not yet had access to the site.

"I believe there was a chemical attack. We're looking for the actual evidence," Mattis told the House Armed Services Committee at a hearing Thursday. "The OPCW (Organization for the Prohibition of Chemical Weapons) is the organization for the chemical weapons convention -- we're trying to get those inspectors in probably within the week. You know the challenges we face where Russia has six times in the U.N. rejected and made certain that we could not get investigators in." The OPCW said Thursday it will be on the ground investigating the suspected chemical attack beginning Saturday.

But Mattis added that even if the investigative team is allowed by the Bashar al-Assad regime to get to the site, "we will not know who did it -- they can only say they found evidence or they did not."

There have been several similar attacks this year, he told lawmakers, but the U.S. did not have troops in those locations because the U.S. is not engaged on the ground there. "So, I cannot tell you that we have evidence, even though we have a lot of media and social media indicators that either chlorine or sarin was used."

The U.S. also wants to avoid causing more civilian deaths "and do everything humanly possible to avoid that," Mattis said. "We're trying to stop the murder of innocent people, but on a strategic level, it's how do we stop this from escalating out of control?"

The president also seemed to suggest that a decision about military action has not been made, telling reporters Thursday morning, "We're having a meeting today on Syria and we're having a number of meetings today, we'll see happens," said Mr. Trump, adding, "We're looking very, very seriously, very closely at that situation and we'll see happens folks, we'll see what happens, it's too bad the world puts us in a position like that."

At stake in Syria is the potential for confrontation, if not outright conflict, between the U.S. and Russia, former Cold War foes whose relations have deteriorated in recent years over Moscow's intervention in Ukraine, its interference in the 2016 U.S. presidential election and, most recently, its support for Syrian President Bashar Assad.

Russian lawmakers have warned the United States that Moscow would view an airstrike on Syria as a war crime and that it could trigger a direct U.S-Russian military clash. Russia's ambassador to Lebanon said any missiles fired at Syria would be shot down and the launching sites targeted — a stark warning of a potential major confrontation.

Mr. Trump, who has often said a commander in chief should never telegraph his military intentions, apparently did so himself, tweeting that missiles "will be coming" in response to the suspected chemical attack that killed at least 40 people near Damascus.

"Russia vows to shoot down any and all missiles fired at Syria," Mr. Trump wrote. "Get ready Russia, because they will be coming, nice and new and 'smart!' You shouldn't be partners with a Gas Killing Animal who kills his people and enjoys it!"

Mattis, however, indicated on Wednesday that evidence of what happened was still being studied. At a photo-taking session during a Pentagon meeting with his Dutch counterpart, Mattis was asked by a reporter whether he had seen enough evidence to blame the Syrian government.

"We're still assessing the intelligence, ourselves and our allies," Mattis said. "We're still working on this."

President Trump suggested Monday he had little doubt that Syria was to blame, but neither he nor other administration officials have produced hard evidence. This is in contrast to an incident one year ago in which the U.S. government had video and other evidence of certain aspects of an actual attack by Syrian aircraft, which involved the use of sarin gas. Mr. Trump responded then by launching dozens of Navy cruise missiles at a Syrian airfield.

Asked whether the U.S. military was ready to conduct an attack in Syria if ordered, Mattis replied, "We stand ready to provide military options if they're appropriate, as the president determined."

Mr. Trump did not detail what a strike on Syria would look like, or whether these would be U.S. missiles. U.S. officials have been consulting with France, Britain and other allies on a possible joint military operation, but the timing remained in doubt Wednesday. The president canceled a foreign trip in order to manage a crisis that is testing his vow to stand up to Assad.

Shortly after his tweeted warning to Russia, Mr. Trump took a more conciliatory tone in lamenting that the U.S.-Russia relationship "is worse now than it has ever been." There is no reason for this, he wrote, adding that "Russia needs us to help with their economy, something that would be very easy to do, and we need all nations to work together."

The U.S., France and Britain have been in extensive consultations about launching a military strike as early as the end of this week, U.S. officials have said. A joint military operation, possibly with France rather than the U.S. in the lead, could send a message of international unity about enforcing the prohibitions on chemical weapons and counter Syria's political and military support from Russia and Iran.

French President Emmanuel Macron said Thursday that France has proof that the Syrian government launched chlorine gas attacks and that France would not tolerate "regimes that think everything is permitted."