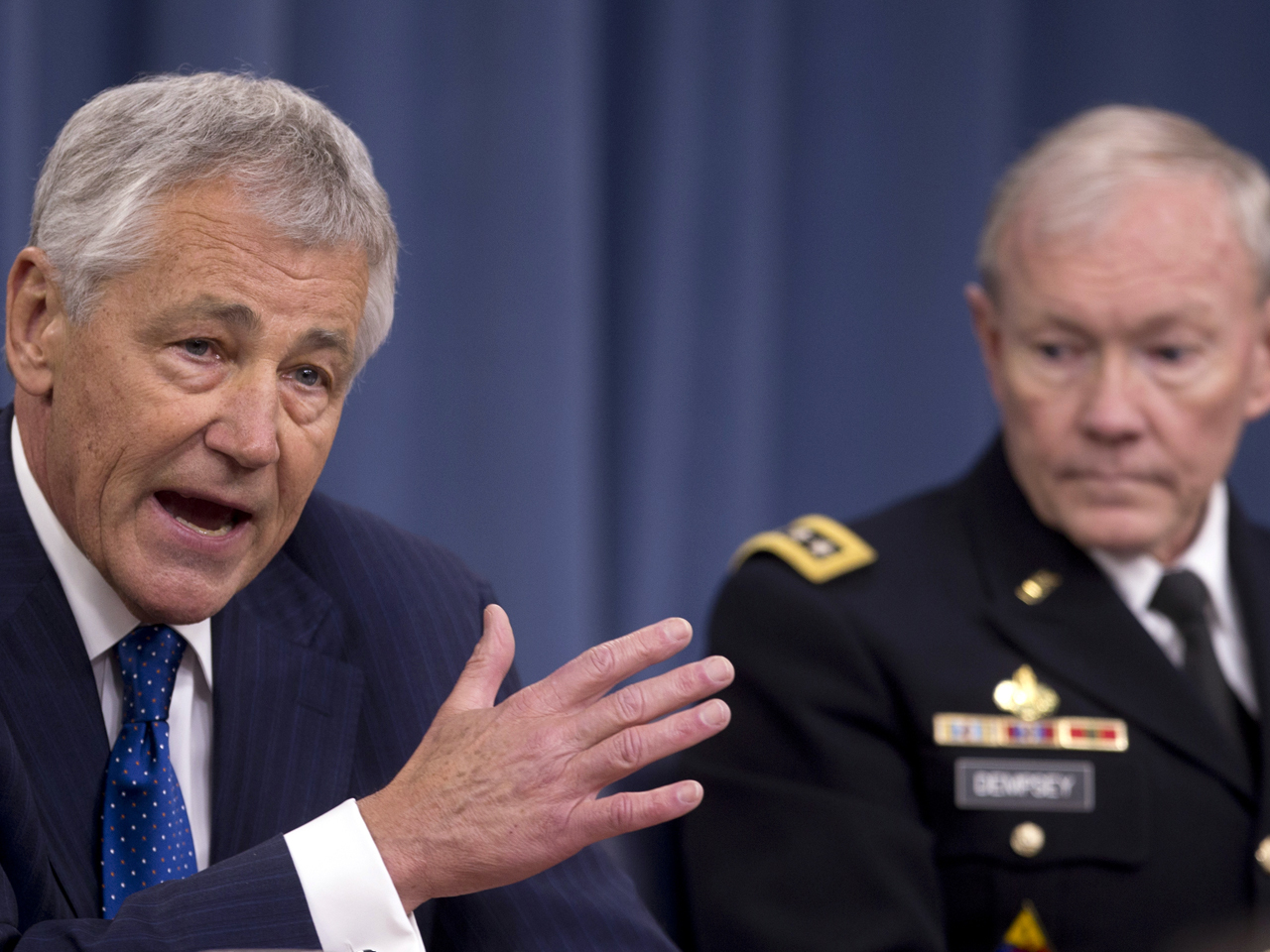 With countries bracing for North Korea to conduct a missile test, Defense Secretary Chuck Hagel said Wednesday that the isolated nation was "skating very close to a dangerous line."

During an afternoon news conference at the Pentagon, Hagel also told reporters that the United States had "every capacity" to "deal with" any action taken by the North against the U.S. and its interests and allies.

"North Korea has been, with its bellicose rhetoric, with its actions, skating very close to a dangerous line," said Hagel, with Army Gen. Martin Dempsey, chairman of the Joint Chiefs of Staff, sitting by his side. "Their actions and their words have not helped defuse a combustible situation."

Dempsey noted that the government has to assume "the worst case" because the North has previously conducted several successful missile launches.

"That's why we're postured as we are today," Dempsey said.

"That country is unpredictable," said Hagel. "If that is the reality that we're dealing with, and it is, you prepare for every contingency."

CBS News correspondent Margaret Brennan, reporting from Seoul, South Korea, said on "CBS This Morning" Wednesday that, according to U.S. intelligence, a missile launch by the North could happen at any time and head in a number of directions.

South Korea said it was bracing for the launch of a new and untested North Korean intermediate-range missile called the Musudan, which is also known as the Taepodong-X.

South Korean Foreign Minister Yun Byung-se told a parliamentary hearing that "according to intelligence obtained by our side and the U.S., the possibility of a missile launch by North Korea is very high," Brennan reports.

The Musudan, which has a range of between 1,500 and 2,500 miles, could reach Japan and U.S. military bases in the region. In Tokyo, Japan's defense minister inspected missile interceptors deployed in and around the capital, Brennan reports.

Earlier, a Defense Ministry official said preparations appeared to be complete, and that the launch could take place at any time.

Yun said Seoul was bracing for the test-fire of the ballistic missile, dubbed "Musudan" by foreign experts after the name of the northeastern village where North Korea has a launch pad. Experts said the Musudan is mainly designed to reach the U.S. territory of Guam though it can also place U.S. military installations in Japan in its striking range.

North Korean officials have not announced plans to launch a missile, but have told foreign diplomats in Pyongyang that they will not be able to guarantee their safety starting Wednesday. Officials also have urged tourists in South Korea to take cover, warning that a nuclear war is imminent. However, most diplomats and foreign residents appeared to be staying put.

The threats are largely seen as rhetoric and an attempt by North Korea to scare foreigners into pressing their governments to pressure Washington and Seoul to change their policies toward Pyongyang, as well as to boost Kim's military credentials. North Korea does not have diplomatic relations with the U.S. and South Korea, its foes during the Korean War of the 1950s.

On the streets of Pyongyang, the focus was less on preparing for war and more on beautifying the city ahead of the April 15 birthday of its founder, the nation's biggest holiday. Soldiers laid blankets of sod to liven up a city still coming out of a long, cold winter; gardeners got down on their knees to plant flowers and trees, and students marched off to school — ordinary springtime activities belying the high tensions.

Downtown, schoolchildren headed toward the towering statues of the two late leaders, Kim Il Sung and Kim Jong Il, dragging brooms behind them. The brooms are used to sweep the plaza where the bronze statues stand on a hilltop overlooking Pyongyang. A group of women with coats thrown over traditional dresses rushed through the spring chill after leaving a rehearsal for a dance set to take place for Kim Il Sung's birthday celebrations.

At the base of Mansu Hill, a group of young people held a small rally to pledge their loyalty to Kim Jong Un and to sing the Kim ode "We Will Defend the Marshal With Our Lives."

Kim Un Chol, the 40-year-old head of a political unit at Pyongyang's tobacco factory, said he had been discharged from the military but was willing to re-enlist if war breaks out. He said North Koreans were resolute.

"The people of Pyongyang are confident. They know we can win any war," he told The Associated Press. "We now have nuclear weapons. So you won't see any worry on people's faces, even if the situation is tense."

North Korea sporadically holds civil air raid drills during which citizens practice blacking out their windows and seeking shelter. But no such drills have been held in recent months, local residents said.

Last year, the days surrounding the centennial of the birth of Kim Il Sung, grandfather of the current ruler, were marked by parades of tanks, goose-stepping soldiers and missiles, as well as the failed launch of a satellite-carrying rocket widely believed by the U.S. and its allies in the West to be a test of ballistic missile technology. A subsequent test in December went off successfully, and that was followed by the country's third underground nuclear test on Feb. 12 this year, possibly taking the regime closer to mastering the technology for mounting an atomic bomb on a missile.

The resulting U.N. sanctions and this spring's annual U.S.-South Korean military drills have been met with an unending string of threats and provocations from the North.

Adm. Samuel Locklear, commander of U.S. Pacific Command, told the Senate Armed Services Committee in Washington on Tuesday that North Korea's persistent nuclear and missile programs and threats have created "an environment marked by the potential for miscalculation."

He said the U.S. military and its allies would be ready if North Korea tries to strike.

North Korea has been escalating tensions with the U.S. and South Korea, its wartime foes, for months. The tightened U.N. sanctions that followed the nuclear test drew the ire of North Korea, which accused Washington and Seoul of leading the campaign against it. Annual U.S.-South Korean military drills south of the border have further incensed Pyongyang, which sees them as practice for an invasion.

Last week, Kim Jong Un enshrined the pursuit of nuclear weapons — which the North characterizes as a defense against the U.S. — as a national goal, along with improving the economy. North Korea also declared it would restart a mothballed nuclear complex.

Citing the tensions with Seoul, North Korea on Monday pulled more than 50,000 workers from the Kaesong industrial park, which combines South Korean technology and know-how with cheap North Korean labor. It was the first time that production was stopped at the decade-old factory park, the only remaining symbol of economic cooperation between the Koreas.

A test-fire of the Musudan missile would violate U.N. Security Council resolutions banning North Korea from nuclear and missile activity, and escalate tensions with the U.S., South Korea and Japan.

As a precaution, Japan has deployed PAC-3 missile interceptors in key locations around Tokyo while the South Korean and U.S. militaries have raised their level of surveillance.

The International Civil Aviation Organization said Wednesday it has received no notice of a missile launch from North Korea, but that it is not mandatory for Pyongyang to inform the organization. North Korea has worked with ICAO in the past to notify air traffic authorities in other countries of its plans to launch rockets.

In London, Russian Foreign Minister urged a calm response from all.

"You should not scare anyone with military maneuvers," he said, according to The AP, speaking in Russian, before sitting down for a meeting with U.S. Secretary of State John Kerry. "And then there's a chance everything can calm down."

One historian, James Person, noted that it isn't the first time North Korea has warned that a war was imminent.

He said that in 1968, following North Korea's seizure of an American ship, the USS Pueblo, Pyongyang persistently advised foreign diplomats to prepare for a U.S. counterattack. Cables from the Romanian mission in Pyongyang showed embassies were instructed to build anti-air bunkers "to protect foreigners against air attacks," he said.

The cables were obtained and posted online by the Wilson Center's North Korea International Documentation Project.

Person called it one of North Korea's first forays into what he dubs "military adventurism."

"In 1968, there was some concern there would be an attack, but (the North Koreans) certainly were building it up to be more than it was in hopes of getting more assistance from their allies at the time," Person said by phone from Alexandria, Va.

"I think much of it was hot air then. Today, I think again, it's more hot air," he said. "The idea is to scare people into pressuring the United States to return to negotiations with North Korea. That's the bottom line."