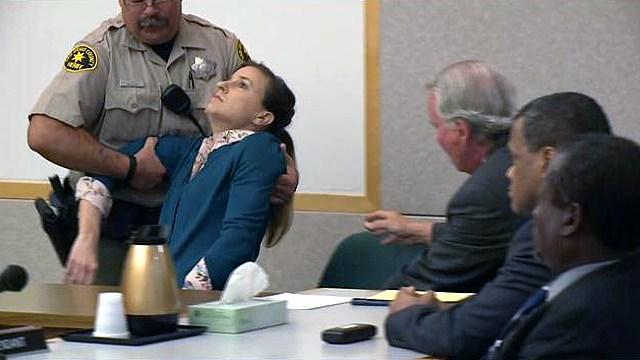 VISTA, Calif. -- A woman collapsed in a California courtroom after hearing she had been found guilty in what authorities called a botched murder-for-hire plot targeting her husband, who was shot but survived.

There were gasps when Lovejoy passed out and fell, and her family members sobbed and asked for someone to help her. Judge Sim von Kalinowski cleared the courtroom so the 45-year-old could receive medical attention.

A TV reporter who attended to Lovejoy before paramedics wheeled her out on a gurney told the newspaper it appeared that she had been overcome by shock.

After court resumed, the same jury then returned guilty verdicts against McDavid. As his family watched, the 50-year-old put his head in his hands and cried.

Lovejoy, of Carlsbad, faces at least 25 years to life in prison. McDavid, who pulled the trigger, faces 50 years to life. Sentencing was set for Dec. 12.

At the time of the shooting, Lovejoy and her then-husband, Greg Mulvihill, were in the midst of heated divorce. The two sides reached an agreement that they would share custody of their young son and that Lovejoy would pay Mulvihill $120,000. That payment was due weeks after he was shot.

The newspaper said there was no dispute that McDavid pulled the trigger and shot Mulvihill on a dark dirt path in Carlsbad on Sept. 1, 2016.

The question was whether the expert gunman did it as a $2,000 hired hitman, or whether he was simply trying to shoot out the light Mulvihill was carrying in his left hand.

McDavid - a former Marine and School of Infantry instructor from Oceanside- testified that it was the latter, that had he intended to kill the man, he could have easily done so. The bullet struck him under his left armpit, and exited out of his back.

Lovejoy did not testify.

One juror said that among the strongest pieces of evidence was testimony from Lovejoy's aunt, who said that a year before the shooting, Lovejoy had asked her if she knew someone who would scare or kill her husband.