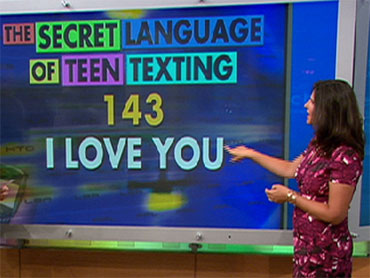 Keeping up with the ever-changing world of technology can prove challenging. That includes parents learning and deciphering a language full of abbreviations and symbols used by teens in text messaging.

But now, there's help. Heather Cabot, Web life editor for Yahoo!, appeared on "The Early Show" Tuesday with some insight into the world of teen texting.

Not sure what those super-short abbreviations mean? Cabot explained they're a unique shorthand for common expressions. She said "LOL," which "Early Show" co-anchor Harry Smith thought meant "lot of love," actually means "laugh out loud." However, Cabot told Smith not to feel badly, because lots of people don't know what the expression means -- she said it's the second most-searched messaging term on Yahoo!.

The next abbreviation Cabot brought up was "ROFL," which means "rolling on the floor laughing."

"Talk to you later," Cabot said, is good for anyone to know.

Other abbreviations, Cabot noted, are based on the numbers of letters in the words, such as "143," which means "I love you."

However, there are some abbreviations meant to keep parents out of the loop.

Ever heard of "KPC"?

Still, Cabot pointed out it's important for parents to know about these abbreviations because it's a great way to communicate with their children. She cited a recent AT&T study that found 82 percent of teens prefer to text with their parents to keep them up-to-date.

"It's their favorite form of communication. It's so easy and quick and convenient," Cabot said. "It doesn't feel invasive."

Cabot told CBS News that, if you haven't figured out how to text and Instant Message yet, maybe now is a good time to start. Kids, she said, often have active social lives, and it's how they communicate with friends.

She said, "If you've got kids headed off to college, it's a great way to just drop a quick line to say hello."