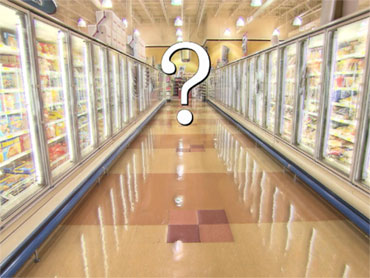 Researchers say it's all but impossible for our minds to process more than seven bits of information at any given time. Small wonder it's so tough to decide even what breakfast cereal to buy at the supermarket. And when it comes to REALLY difficult decisions, you may want to consult with Susan Spencer of "48 Hours,", who now reports our Cover Story:

Remember the old joke about the psychiatrist who asks his patient if he has trouble making decisions? And the patient says, "Well, doctor, yes and no."

"I like to think of life as just one decision after another," said Jonah Lehrer. "From the most mundane decisions, what kind of toothpaste to buy, all the way up to who to marry."

Science writer Jonah Lehrer sees every one of those choices as a tug of war, an exhausting battle between our gut feelings and our reasoned thoughts.

"For a long time people have said that the best way to make a decision is to be rational," Lehrer said. "And yet, in recent years, scientists have discovered that the rational brain can only take in a few bits of information at any given moment. So, you start giving it too much information and it starts to short-circuit and sputter."

To eliminate sputtering when faced with complex decisions - buying a car, computer, or even a house - Lehrer says stop all that thinking . . . just go for it!

"Our emotional brain is actually much better at taking in lots and lots of information," he said. "Summarizing lots of data very efficiently, and saying, 'Here's a feeling. Don't worry about all the details. Here's a feeling. We've already taken those details into account.'"

We process emotions in the front part of the brain, and damage to those frontal lobes can spell disaster for decisions.

Take the strange case of a brilliant former business exec known only as Elliot.

Surgery for a brain tumor left his intellect intact. Doctors were thrilled . . . until they realized what the surgery had not spared . . .

"He lost the ability to experience emotions," said Lehrer. "Now, you'd think if you were Plato, for instance, that this would make Elliot the best decision maker possible, right? 'Cause he'd be perfectly rational. He'd have no emotions leading him astray.

"It turned out, though, that Elliot became pathologically indecisive," Lehrer said. "He would spend all day trying to figure out where to eat lunch, or which pen to sign his name with. I think the larger point here is about just how essential our emotions are in the decision making process."

"You know, how when a storm comes in, it affects everything in its path? That's what an emotion does," said psychologist Jennifer Lerner.

The work of Lerner at the Harvard Decision Science Laboratory shows how impossible it is to make the rational decisions we all think we make.

She demonstrated an experiment for us in which she shows subjects emotional movie clips, like one from the 1979 film, "The Champ," where a young boy deals with his father's death.

"No one could watch this and not feel sad," said Spencer.

Once subjects are sad, Lerner gives them a decision to make, like how much they'd pay for something. She's found she generally can predict their answer based on their mood.

"These are feelings you just happen to have at the time you're making a judgment or a decision, but they really should not be an input to your decision," Lerner said. "And these are things, like, you're cut off in traffic."

Get mad about the commute, and you're more likely to make a risky decision at the office.

Which can be downright dangerous.

Take seatbelts . . . if you're happy or angry, you're less likely to wear one. You're also less likely to use a bike helmet, lock your car, or buy life insurance.

And if you're sad, stay away from the mall: You'll probably spend too much!

Baseball legend Yogi Berra once had some great advice for making decisions: When you come to a fork in the road, he supposedly said, take it!

But what if you have more than two choices? What if you have five, or ten, or a hundred, or - as they claim at Starbucks - 87,000 choices for a cup of coffee?

"Americans certainly love choice more than anywhere else in the world," said Columbia University professor Sheena Iyengar, who says her experience as a blind person gives her a different take on all those choices.

But, she said, "Fr the most part, we don't have the resources to find it. I mean, we get overwhelmed."

Even experts on decisions are not immune.

"This is a slightly embarrassing confession," said Lehrer, "but I got interested in the subject in large part because of my own chronic indecision. I was the type of guy who would walk into a drug store for toothpaste and lose an entire afternoon."

Don't tell Baskin Robbins, famous for its 31 flavor campaign, but in fact more choices may make an actual purchase less likely, as Professor Iyengar discovered with her supermarket "Jam Experiment."

In one display, she put out six samples of jam. In another, 24.

Result: Shoppers mobbed the table with 24 varieties . . . BUT they were 10 times more likely to buy jam when they were staring at only six.

"Everybody wants to go to that store that offers you a thousand options, and that's the best recipe to walk into that store and walk out and buy nothing," she said.

"What is the accumulative effect of having to make all these choices?" Spencer asked.

"Essentially what happens is they get so tired and emotionally drained that we even find that their immune system drops," Iyengar said. "They even more likely to get a cold, to get a flu."

If that's true, then buying a book on decisions these days poses a real health hazard … too many to decide which to buy!

Brothers (and co-authors) Chip and Dan Heath have added to the mix, with practical tips for making those big life-changing decisions our emotions want to sabotage.

When it's LITERALLY a battle between our GUTS and our heads, the Heath brothers recommend, well, tricking yourself . . .

"So, if you want to go on the diet, store away the dinner plates that you feel like you have to fill up in order to have a good meal, and eat off your salad plates," said Chip Heath. "Studies have shown that you eat 20, 25 percent less by doing that. If you're having trouble spending because you're being bombarded with messages about the things that you should have, then freeze your credit cards in a block of ice and force yourself to go through a warming-up period before you actually spend."