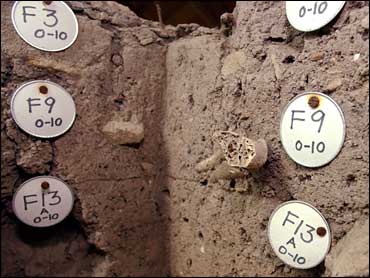 Evidence that humans inhabited western Pennsylvania some 16,000 years ago — thousands of years earlier than most scholars believe — is still dividing archaeologists, 30 years after blade tools and materials to make beads were found in a rock shelter.

Archaeologist J.M. Adovasio and his crew began to unearth the artifacts in the summer of 1973 at the Meadowcroft Rockshelter, about 25 miles southwest of Pittsburgh. Those findings challenged for the first time a belief cemented in the 1950s that humans had crossed the Bering Strait and first settled near Clovis, N.M., about 12,000 years ago.

Adovasio says skepticism over his findings has slowly dissipated over the last three decades, because of extensive study, dozens of radiocarbon tests and the discovery of other sites in North and South America.

"I believe that the site is truly pre-Clovis, but there are some questionable dates and questionable findings," said Robson Bonnichsen, the director of the Center for the Study of the First Americans and professor of anthropology at Texas A&M University.

Adovasio, who was then a new archaeologist at the University of Pittsburgh, was looking for a suitable site for a field school in 1972 when he heard about a rock shelter near a farm in Washington County. He is now the director of the anthropology-archaeology department at Mercyhurst College in Erie.

Even today, the cavern seems like the perfect place to camp for a week. It sits near a tributary of the Ohio River and permanent springs. The interior is dry, well-ventilated and suitable for up to eight people, and hunting and foraging would be easy nearby.

Adovasio's crew uncovered more than 20,000 artifacts, including a fire pit used thousands of years ago and pits that could have been used for storage or refuse.

Radiocarbon dating showed that humans were unquestionably at the site between 14,000 and 15,000 years ago and possibly as early as 16,000 years ago, according to Adovasio's findings.

But some scholars believe the samples could have been contaminated with coal that dissolved into groundwater.

Adovasio and his defenders point out that four independent radiocarbon labs and researchers at Boston University have found no evidence of coal contamination.

"There's not much more to test," said Mark McConaughy, who worked on Adovasio's field crew in 1973 and is now a field archaeologist with the state Bureau of Historic Preservation. "They're just being stubborn and, basically, there are certain doubters who will never change their mind."