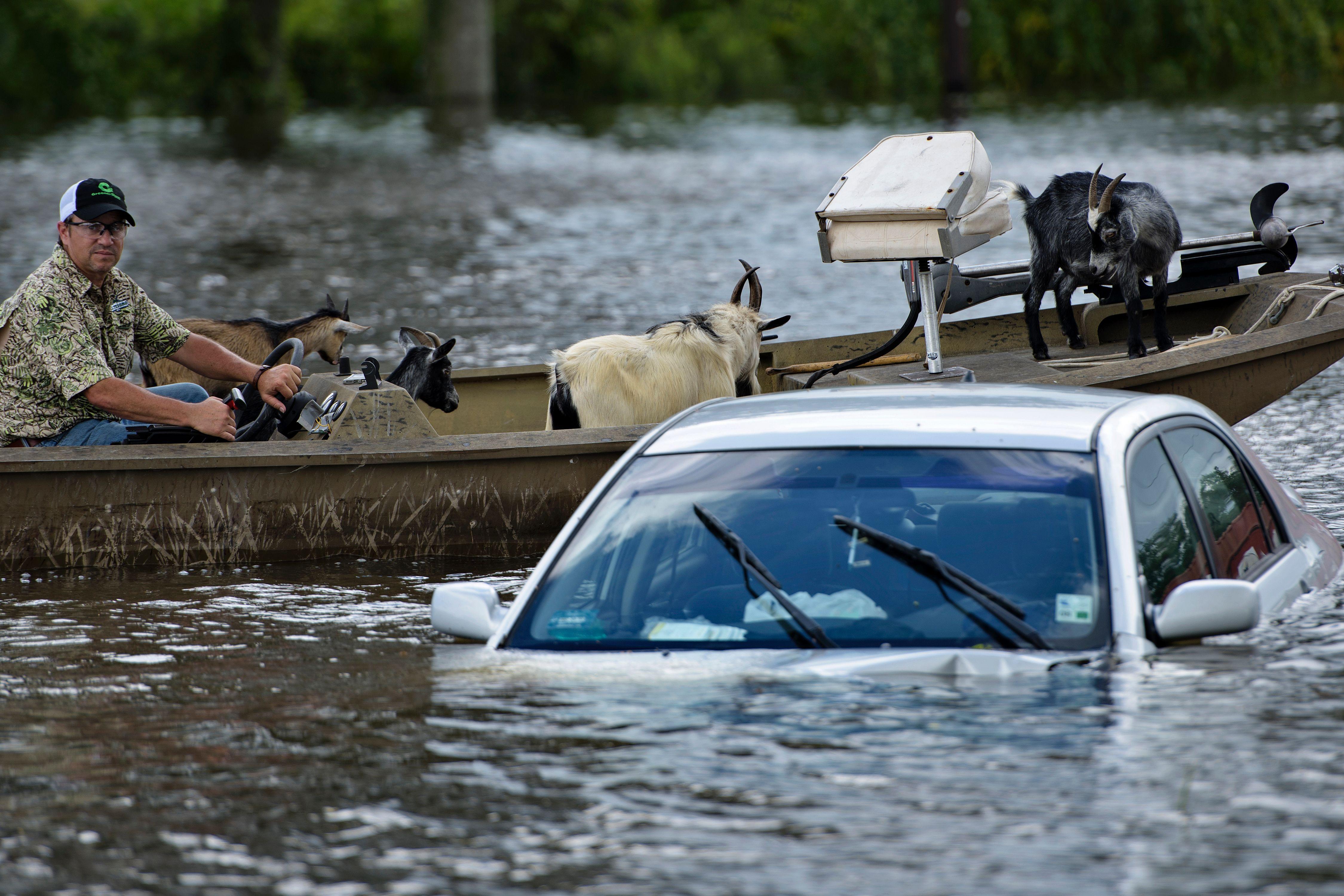 DENHAM SPRINGS, La. -- The state says the death toll from the recent storms andflooding in south Louisiana has risen to 13.

The state says five people have died in East Baton Rouge Parish, three in Tangipahoa Parish, two in St. Helena Parish, two in Livingston Parish and one in Rapides Parish from the storms and their aftermath.

With an estimated 40,000 homes damaged by deadly flooding, Louisiana could be looking at its biggest housing crunch since the miserable, bumbling aftermath of Hurricane Katrina a decade ago.

People whose homes were swamped by some of the heaviest rains Louisiana has ever seen are staying in shelters, bunking with friends or relatives, or sleeping in trailers on their front lawns. Others unable or unwilling to leave their homes are living amid mud and the ever-present risk of mold in the steamy August heat.

Many victims will need an extended place to stay while they rebuild. Countless others didn’t have flood insurance and may not have the means to repair their homes. They may have to find new places altogether.

“I got nowhere else to go,” said Thomas Lee, 56, who ekes out a living as a drywall hanger -- a skill that will come in handy. His sodden furniture is piled at the curb and the drywall in his rented house is puckering, but Thomas still plans to keep living there, sleeping on an air mattress.

Exactly how many will need temporary housing is unclear, but state officials are already urging landlords to allow short-term leases and encouraging people to rent out any empty space they might have.

“If you have a unit that’s an old mother-in-law suite and you can rent it out, let us know,” said Keith Cunningham, who heads the Louisiana Housing Corporation, the state housing agency.

The Federal Emergency Management Agency, whose very name became a punchline during Katrina, said it will look into lining up rental properties for those left homeless and will consider using temporary housing units.

But FEMA Administrator Craig Fugate gave assurances that the temporary units won’t be the old FEMA travel trailers -- a reference to the ones brought in after Hurricanes Katrina and Rita that were found to have toxic levels of formaldehyde.

The flooding that has struck the Baton Rouge and Lafayette areas has left at least 13 people dead. More than 30,000 have been rescued, and at least 70,000 have registered for federal disaster assistance. At the height, 11,000 people were staying in shelters, though that had dropped to 6,000 by Wednesday.

Shelia Phillips and her grandson ace survived the floodwaters…but thought they lost everything…until they were reunited with tippy at an animal shelter.

“We might have lost possessions, but pets are part of the family,” she said.

For the foreseeable future, home for Carolyn Smith, her husband, two grown sons and a family friend will be a 30-foot travel trailer supplied by a relative. It has one bedroom, a sofa-sleeper, four bunks and one bathroom.

It sits in the driveway of the home she and her husband lived in for 48 years in Denham Springs. Nearby lies a pile of stinking debris pulled from the flooded, one-story wood-frame home.

Smith and her husband are both in their 70s and on fixed incomes. She said she is not sure how they will make it in the coming months as they try to rebuild the house, which took on more than 4 feet of water.

“We’re starting over again. From rock bottom,” she said. “At our age that’s kind of rough.”

In a sign of the housing crunch, Livingston Parish officials are talking with FEMA about getting temporary housing for emergency and rescue workers. An estimated 75 percent of the homes in the parish of 138,000 residents were a total loss.

Those with flood insurance will be in a much better place to begin rebuilding - but there won’t be many of them.

Louisiana Insurance Commissioner Jim Donelon said that only 12 percent of the homes in hard-hit Baton Rouge were covered by flood insurance, and only 14 percent in Lafayette. He called those figures shocking.

Across the flood-stricken area, many residents said they weren’t required to have flood insurance and didn’t have it, since nothing remotely like this had ever happened before.

“My father’s owned this place for 70 years. Never seen it like this. We never thought we needed it,” said Chris Bankston, owner of an auto parts place in the Livingston Parish town of Albany where workers were shoveling debris and carrying out ruined equipment and furniture.

Water crept into his parking lot Friday night, and by Sunday his gasoline pumps were covered. Floodwaters had never come within 200 yards of the place before, he said.

FEMA said more than 9,000 flood claims have been filed with the agency.

Anyone with flood damage is eligible for FEMA aid of close to $33,000 - far less than many people without flood insurance will need to repair and replace their damaged property. The maximum payout under a home flood insurance policy is $250,000.

Joseph Bruno, a New Orleans lawyer who is a veteran of the Katrina insurance wars, fears the greatest needs could be borne by elderly residents who paid off their homes and weren’t required by their bank to carry flood insurance.

Ronald Robillard, 57, and his 65-year-old brother, William Robillard, have been living next door to each other in Baton Rouge homes owned by the older brother. Since both places flooded, they have been sleeping at a shelter at night and cleaning up the homes during the day.

William owns the homes free and clear. He doesn’t have flood insurance to pay for the repairs but isn’t waiting for any government aid.

“I figure by fixing it up one room at a time, we’ll be fine,” William said.

“If they give us help, fine,” Ronald added. “We ain’t looking for a handout. Just a hand. That’s a true statement.”