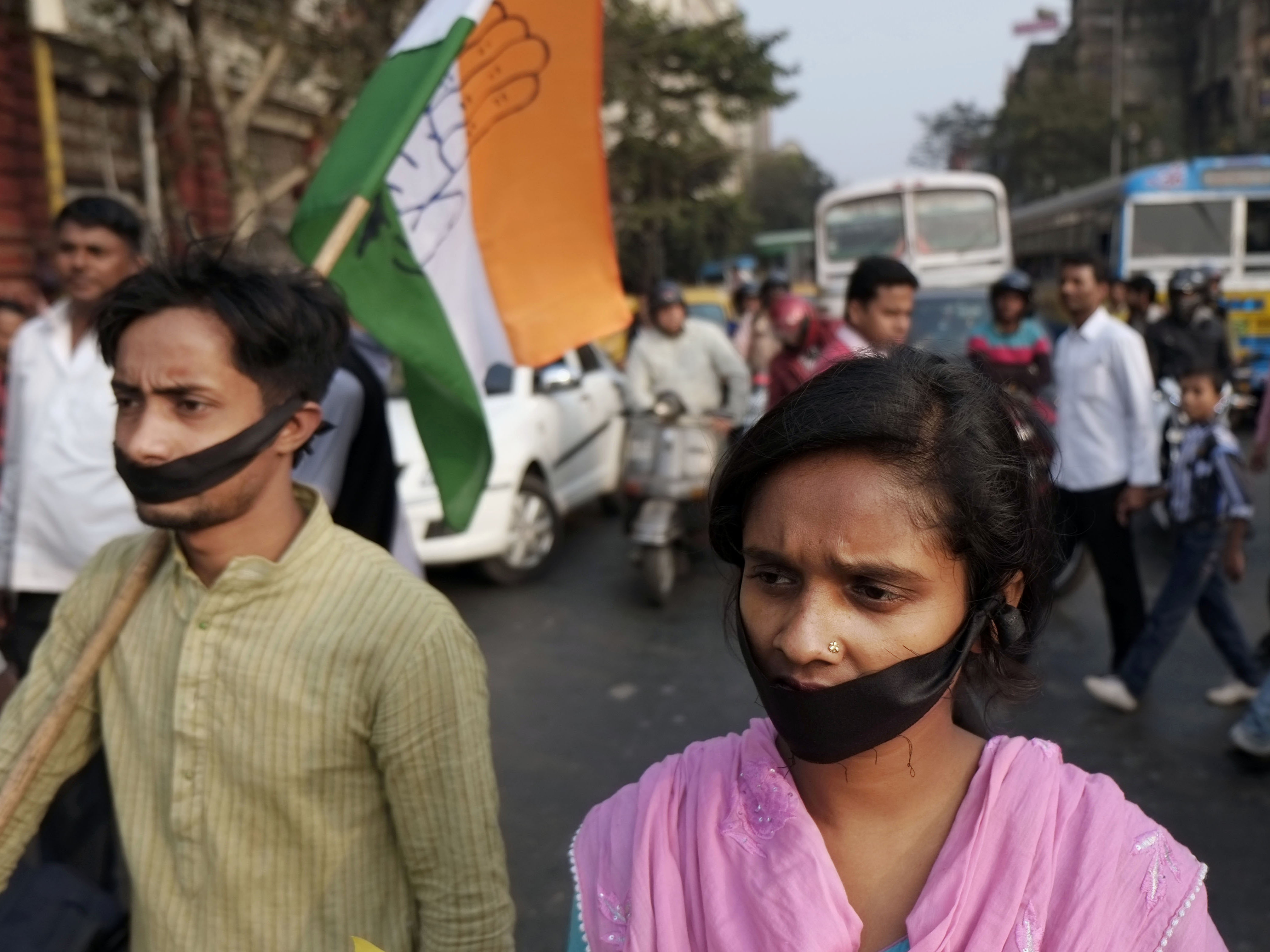 NEW DELHI - The 16-year-old reported that she had been gang raped, only to be raped again by the same men the next day and later threatened for going to the police in eastern India. By the time charges were filed more than two months later, she had been set on fire and died from her injuries.

The girl's death on New Year's Eve in West Bengal came more than a year after a deadly gang rape in New Delhi raised awareness and outrage over chronic sexual violence in India and government failures to protect women. The New Delhi rape was considered a major reason for why voters ousted the capital's government last month, and a furious response to the West Bengal case suggests that with general elections just months away, politicians are anxious to impress voters who are demanding that women's safety become a police priority.

The teen's family, allegedly run out of town by her assailants, accuses police of trying to cover up the crimes.

Improving sensitivity by police officers and medical workers is crucial to improving women's safety in this country of 1.2 billion, activists say. Even as the government has promised to improve justice for rape victims, some trying to report sexual crimes have said they were harassed by officers making lewd comments, demanding bribes or simply shooing them away.

The girl reported being gang raped on Oct. 25 and 26, but Kolkata police did not arrest anyone until the girl ended up in a hospital Dec. 23 with severe burn injuries. Doctors then determined she was pregnant. Police initially told reporters she had attempted suicide, but the girl's family disputed that, saying she was set on fire by associates of those who had gang raped her.

After the girl's death led to a public uproar, police arrested and charged six suspects in the gang rapes and another two accused by the girl of setting her alight. A fast-track court will hold a first hearing in the both cases Jan. 15. Meanwhile, a forensic laboratory is determining the age of the girl's fetus in order to establish whether she became pregnant from the rapes.

The case has reinforced the widespread view in India that police are a major part of India's chronic problem with sexual violence.

Massive protests erupted in Kolkata, with critics including artists, rights activists and opposition politicians saying authorities ignored the family's complaints of harassment and moved too slowly to arrest the suspects.

Critics question why police filed a case over the first reported gang rape, but not the second. Both the opposition and the girl's taxi driver father are demanding that federal investigators take over the case.

"The fact that politicians and public figures are speaking in such strong terms is surprising," said Abhilasha Kumari, a New Delhi-based sociologist and women's right's activist. "Historically, the concerns of women have never mattered much to the political community, but in the past year safety and security of women have become a political issue, and it will be even more so now with elections coming."

The girl's family accused police of trying to cover up the crimes, and even of hijacking the hearse carrying his daughter's body in an attempt to take it for cremation against the family's wishes. A street brawl broke out as opposition supporters tried to block police from taking the body from the mortuary, where protesters had planned a rally to criticize a lack of sensitivity by authorities.

Police said they had taken the highly unusual step of seizing the body in an attempt to help the family during a difficult time and to spare the city any more upset from the case.

The incident shocked Bengalis. Filmmaker Aparna Sen said she was "devastated." The girl's remains were eventually cremated Wednesday night with the family's consent.

"Those who have gang raped my daughter should be given death penalty," the grieving father told reporters last week after meeting with the state's governor to complain about a "tyrannical" police response. Neither the girl nor her father is being named by Indian media under laws guarding the identity of rape victims.

The father said police threatened him, demanding that he leave the state or else have his taxi business shut down.

West Bengal's government, led by a woman chief minister, has said little about the case apart from defending its response.

Chief Secretary Sanjay Mitra pledged financial aid for the family and reiterated "our commitment for zero tolerance to attacks on women."

The nationwide outcry over the 2012 gang rape in New Delhi led the federal government to rush legislation doubling prison terms for rapists to 20 years and criminalizing voyeurism, stalking, acid attacks and the trafficking of women. The law also makes it a crime for officers to refuse to open cases.

But the same gang rape case helped bring down New Delhi's local government in a ballot last month, with many Delhiites questioning how a so-called "fast-track" court took more than seven months to deliver a guilty verdict.

Police in Mumbai earned praise for quickly rounding up five teenagers accused of raping a photojournalist within a day of her reporting the attack, but the death of the girl in West Bengal stoked public demands that police be held accountable for their response to sexual violence.

"The girl should have been protected, and since there was no protection she was raped again and subsequently killed," said Mamta Sharma, chairwoman of the National Commission for Women.

"The public anger on the incident is genuine. All parents want to see their daughters are safe," independent Kolkata political analyst Subir Bhowmik said. "The government wants to show that they are not at fault and working for the people. Opposition parties also want to reap benefit from this issue."

Some activists warn that political posturing could harm efforts to improve women's safety by turning particularly savage cases like the one in West Bengal into opportunities for media hounds and voyeurs.

Little publicity was given to the case in the weeks after the girl reported being gang raped in October and left in a field near her home in the Madhyamgram suburb of Kolkata, formerly Calcutta. A day later, while returning with her parents from reporting the crime to police, her family said she was abducted by the same men and gang raped again before being left unconscious by railway tracks.

When the family fled to a new home in another suburb called Dum Dum, they said they were visited on Dec. 23 by associates of the girl's attackers and threatened with violence if they didn't withdraw their police complaint. Later that day, the girl was set on fire in her home. She died from her injuries on Dec. 31.

"The West Bengal government is responsible for inaction, but the opposition is equally insensitive in terms of politicizing the rape of a child," said Ranjana Kumari, a women's activist with the Center for Social Research. "We need all parties to set politics aside and address an issue that affects us all."