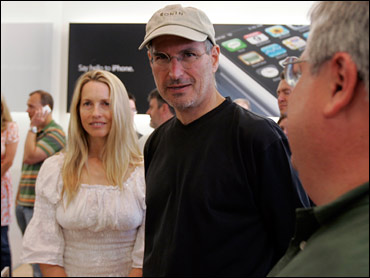 Thanks for letting me try out one of your new iPhones. Not only has it been fun to play with but having it over the weekend sure made me the center of attention. Were I young and single, I have no doubt the iPhone would have gotten me a date or two.

I feel sorry for all those people who waited in line and spent $500 or $600 on Friday but couldn't activate it because of AT&Ts glitches. They missed out on showing it off during the weekend and impressing their friends.

Seriously, it's a breakthrough product and Apple is to be congratulated for raising the bar not only for future cell phones but future media players. I sure hope you incorporate the touch screen and "multi-touch" interface on future iPods and maybe even future Macs. Once again, your genius for user interface has paid off.

But there are a few things you could improve. I'm hoping that some of these might be fixable in software as a free over-the-air download. Other fixes will of course have to wait for Version 2.

I won't bug you too much about that slow AT&T Edge network because I know you're going to eventually switch over to AT&T's 3G network.

Meanwhile there are other things that you could start to work on right away.

The interface is great but it could be improved with a consistent back or "escape" key. The process of backing out of screens that you don't want to be in is inconsistent. On some screens there is a cancel option but sometimes you have to go back to the main menu when what you really want is to go back one screen.

I love the fact that you can turn the phone sideways when browsing the web or looking at pictures and that the built-in accelerometer changes the view from portrait to landscape automatically.

How about adding this capability to email and other applications? The reason you should do it in email is because holding the phone sideways would let you display a wider keyboard, which would allow you to place the virtual keys further apart. As it is now, I'm frequently pressing the wrong key because they're too close together.

I love the Google maps but hate that you have to tell the phone where you are. GPS is now a common feature, even in free phones. With its 3 ½ inch screen and built-in speaker, the iPhone could be a killer navigation device if only it could track you as you drive, walk or bicycle, as can many phones that run Telenav and other GPS navigation programs.

When you and Steve Wozniak developed the Apple II you created an open software and hardware interface, which is what made that early machine so valuable and set the standard for all subsequent personal computers. Why not extend that to phones?

While you're at it, how about adding voice dialing and voice recognition? It would make the phone a lot easier to use when you need to make a call and can't look at the screen and would go a long way to making up for the downsides of a touch-screen dial-pad.

I was thrilled to see the iPhone has a standard size headphone jack which made me think I could use any headphone including expensive noise canceling headphones but was very disappointed to see that you recessed it so it won't work with most other headphones or the audio cable for my car stereo. I know – Belkin makes an $11 adapter that solves the problem but I don't want to carry around yet another adapter that takes up space and is sure to get lost.

Macs and PCs have cut, copy, paste and "save as" functions but the iPhone lacks a way for users to do anything with text or images other than look at them. You should at least be able to clip text from a website and paste it into an email message.

The iPhone has a great 2 megapixel camera but no video camera. You might consider adding one and while you're at it include a copy of iChat or AIM so that people can make video calls from the road. That would be way cool.

I don't know if you're aiming the phone at kids but I do know of a couple of 13-year-olds who bought one. Because the phone is online and comes with a web browser, you really ought to consider adding some parental controls, such as those Apple and Microsoft have on your desktop operating systems.

Steve, I don't so much mind you charging an extra $100 for the eight gigabyte version ($599 compared to $499 for four GBs) but why not let users add additional memory with either an SD card or one of those tiny microSD cards that a lot of other phones accommodate? SanDisk just announced an eight gigabyte microSD card which could let users double the storage of their eight GB iPhones.

And speaking of storage, why limit people to the music, video and photos they can store on the phone? Now that you make a connected device, you should let people use your .Mac or other online service to store their media and pull it down to the iPhone as needed.

Come to think of it, that would be a great feature for Macs, PCs and that WiFi-enabled iPod that you haven't announced but ought to build. In fact, you ought to offer an iPod that has all the features of the iPhone, minus the phone for a lot less money and no service fees.

And why on earth would you not let users replace their own battery? It's one thing to be without an iPod for a few days while waiting for a battery to be installed but no one wants to give up their phone which, as you say, lets "them carry their whole life in the palm of their hands."

And, of course, I'd like you to lower the price but I know you won't do that until sales start slacking off or the competition comes out with something as good or better.

Once again, thanks and congratulations for this incredible product. If you fix just a few things and make it more affordable, I'd recommend an iPhone to a lot more people other than those who are made of money or willing and able to spend money to live on the bleeding edge of technology.