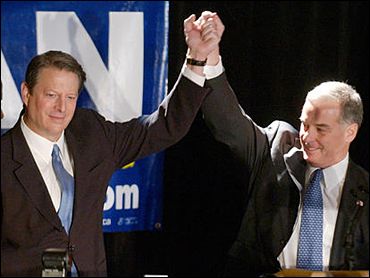 "I am very proud and honored to endorse Howard Dean to be the next president of the United States," Gore said during an appearance with Dean in Harlem.

Gore said Dean "really is the only candidate who has been able to inspire at the grassroots level all over the country." He said the former Vermont governor also was the only Democratic candidate who made the correct judgment about the Iraq war.

"Our country has been weakened in its ability to fight the war against terror because of the catastrophic mistake the Bush administration made in taking us to war in Iraq," Gore said.

Dean said he it was an honor and a privilege to receive Gore's endorsement.

Gore's political impact was immediately evident at the event when Roy Neel, a longtime operative, pledged to join Dean's campaign, bringing his network of Gore supporters with him.

Gore and Dean appeared in Harlem before flying to Cedar Rapids, Iowa, where Dean is locked in a tight race with Rep. Richard Gephardt in the Jan. 19 Democratic caucuses.

While praising the party's other presidential candidates, Gore said Democrats should unite behind Dean or at least stop attacking him.

"We don't have the luxury of fighting among ourselves to the point where we seriously damage our ability to win on behalf of the American people," Gore said just hours before tonight's debate.

As word of Gore's decision spread through political circles, sources close to the campaign told CBS News the former vice president believes Democrats have fought themselves for too long, that he is "unhappy" with the tone of the campaign and believes his best move is to endorse Dean and do it now.

Sources also said Gore has become more and more angry about President Bush's handling of the war in Iraq. That attitude was reflected in his Nov. 9 speech to MoveOn.org, which was filled with stinging criticism of the war as well as Attorney General John Ashcroft and the Patriot Act, opposed by civil libertarians and defended by the White House as part of the war on terror.

The coveted endorsement by Gore is a breathtaking victory for Dean, a candidate whose anti-war, anti-establishment candidacy has given pause to party leaders and key constituencies, several Democratic strategists said.

"What this says is that all these Washington insiders who have been gnashing their teeth, wringing their hands and clinging to their cocktail cups can relax now. Dean's been knighted by the ultimate insider," said Democratic consultant Dean Strother of Washington. "It's game, set and match. It's over."

Other Democrats offered more cautious appraisals, but the overwhelming consensus was that Dean's coup makes him the overwhelming favorite to claim the nomination. Even advisers to Dean's rivals conceded they were stunned and disheartened by the news.

In choosing Dean, Gore bypassed his own vice presidential pick in 2000, Sen. Joe Lieberman of Connecticut, who is struggling in his bid to capture the nomination. Lieberman even waited until after Gore made his decision last December not to run before embarking on his candidacy.

"I was caught completely off-guard," Lieberman told NBC's "Today" show Tuesday. That many of Gore's positions are opposite to those of Dean made the decision a surprise to him, Lieberman said.

"Al Gore has endorsed someone here who has taken positions diametrically opposite" of the former vice president, Lieberman said. "What really bothers me is that Al is supporting a candidate who is so fundamentally opposed to the basic transformation that Bill Clinton brought to this party in 1992," moving it to a more middle-of-the-road stance on economic policy and other areas, he said.

Asked whether he felt betrayed by the former vice president, Lieberman said, "I'm not going to talk about Al Gore's sense of loyalty this morning."

Another Democratic candidate, retired Gen. Wesley Clark, responded to the Gore endorsement by issuing a statement touting the number of former Gore staffers working on his campaign.

Some rank-and-file Democrats were stung by Gore's decision.

"It isn't fair that he turned his back on Lieberman," said Mohammed Islam, a New York taxi driver and longtime Democratic voter. "If he was good enough for him in 2000, why not now?"

In 1998, Dean considered challenging Gore for the Democratic nomination in 2000 but backed away amid pressure from the vice president's office, and opposition in Vermont. He quietly lobbied to be mentioned as a vice presidential candidate, but did not make Gore's short list.

The pair have differed on many key issues, such as gun control. While Gore fought the National Rifle Association, Dean was embraced by the lobby.

Gore is pre-eminent among the party's establishment, second only to former President Clinton and his wife, Sen. Hillary Rodham Clinton, D-N.Y. Officials close to both Clintons said Monday that they would not endorse in the primary race.

Gore announced Dec. 15, 2002, that he would not make another run for the White House, saying a rematch with President Bus would force him to revisit the recount ordeal of 2000.