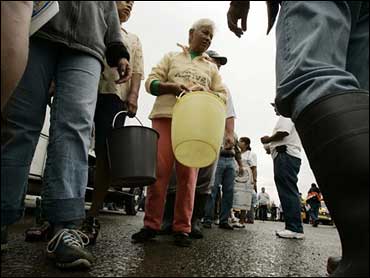 The remnants of Hurricane Dean dumped heavy rain across central Mexico on Thursday, drenching mudslide-prone mountains as it pushed inland after slamming into the Gulf Coast as a Category 2 storm and killing four people.

Neighbors banded together to clear fallen trees with axes and machetes from the streets of this storm-lashed city, while workers began reconnecting downed power lines.

Mexican officials said Thursday that four people died after the storm struck the central Mexican coast. In Veracruz state, a man drowned trying to cross a swollen river and another was crushed to death by a rain-soaked wall. In neighboring Hidalgo state, a woman and her 14-year-old son were killed when their shack collapsed on them in a mountain village.

Jamaica also reported another death, bringing the storm's toll to 25.

Although the death toll in Mexico was low — especially for a Category 5 storm, as it was when it first made landfall on the Yucatan Peninsula — CBS News' Adrienne Bard reports Dean still caused plenty of material damage, wiping out corn crops, demolishing thousands of modest huts and ripping apart a dock for cruise ships.

The National Hurricane Center in Miami downgraded Dean to a tropical depression late Wednesday but was keeping close watch Thursday to see whether it would re-form over the Pacific Ocean. With up to 20 inches of rain expected, authorities worried there could still be floods or mudslides.

Dean's remnants moved out over the Pacific Ocean near Manzanillo. Even if the system does slowly regain tropical storm force, forecasters would give it another name because Dean weakened below tropical cyclone status over Mexico's mountains.

The mountain ranges near Mexico's coast are dotted with villages connected by precarious roads and susceptible to disaster. A rainstorm in 1999 caused floods that killed at least 350 people.

Dean slammed into Mexico for the second time in as many days Wednesday with top sustained winds of 100 mph. Its center hit the tourism and fishing town of Tecolutla. The wide storm's hurricane-force winds lashed at a 60-mile stretch of the Mexican coast in Veracruz state.

"There's been a tremendous amount of damage across the state," Veracruz Gov. Fidel Herrera told the Televisa television network. In the vanilla-harvest heartland of Papantla, "a huge number of roofs were ripped off houses," he said.

As the storm pushed inland, Poza Rica, located 30 miles from Tecolutla, became the area's command center, and hundreds of people awoke in shelters there Thursday.

Maria Patricia Perez, a 40-year-old merchant in Poza Rica, had the tin roof ripped completely off her house. "We were afraid it would knock down everything," she said.

Shopkeeper Joel Cruz's house was left without electricity or telephone lines after a 30-year-old pine tree gave way, but it could have been worse. Amid the howling winds, his neighbors helped him tie ropes around the tree and they were able to direct its fall away from his home. They also managed to move two cars away just before the giant tree came down.

"It was an adventure we survived," the 30-year-old Cruz said.

Dean hit the mainland as a Category 2 storm after regaining some of the force it unleashed on the Yucatan. Its first strike on the peninsula Tuesday as a Category 5 tempest with 165 mph winds was the third-most intense Atlantic hurricane ever to make landfall.

Mexico suspended offshore oil production and shut down its only nuclear power plant as tens of thousands headed for higher ground. The state oil company reopened three ports in the southern Gulf after the storm passed and said there was no known damage to any of its production facilities.

Although Dean swept over Yucatan as a rare Category 5 hurricane, which is capable of causing catastrophic damage, its top winds were relatively narrow and appeared to hit just one town: the cruise ship port of Majahual.

Nearly everyone in Majahual fled or was evacuated ahead of the storm. Dean demolished hundreds of houses, crumpled steel girders, splintered wooden structures and washed away parts of concrete dock that transformed what once was a sleepy fishing village into a top cruise ship destination.

A spokesman for Royal Caribbean Cruises Ltd., Michael Sheehan, said the company may have to find an alternative for a ship that has a port call at Costa Maya on Aug. 30.

Another top cruise ship operator, Carnival Corp., said early reports were that damage to Costa Maya was extensive and "the port will be out of commission for an indeterminate period."

Information still was sparse about dozens of inland Mayan Indian communities where people living in stick huts rode out the storm.

Greatly weakened from its trip across the peninsula, Dean moved through the southern Gulf of Mexico, home to 100 oil platforms, three major oil-exporting ports and the Cantarell oil field, Mexico's most productive. All offshore production was halted ahead of the storm, reducing daily production by 2.7 million barrels of oil and 2.6 billion cubic feet of natural gas.

But Pemex said its offshore platforms and loading facilities would emerge without major damage.