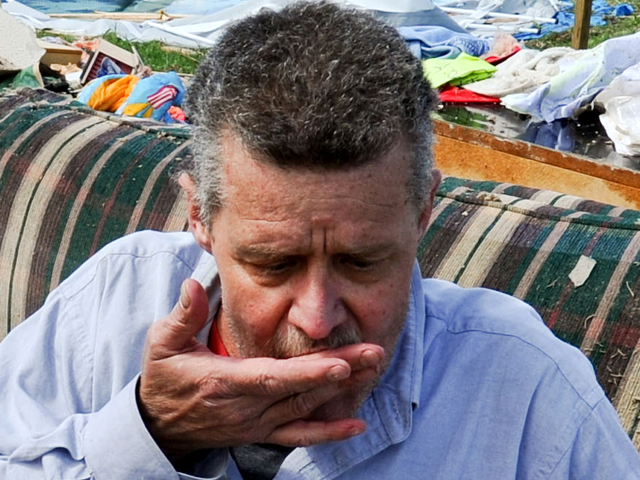 PLEASANT GROVE, Ala. - Dozens of massive tornadoes tore a town-flattening streak across the South, killing at least 280 people in six states and forcing rescuers to carry some survivors out on makeshift stretchers of splintered debris. Two of Alabama's major cities were among the places devastated by the deadliest twister outbreak in nearly 40 years.

The massive weather system that carved the path of death and destruction moved up the East Coast Thursday afternoon. Several funnel clouds have been spotted in the mid-Atlantic area, including one near Andrews Air Force Base in Maryland. But no injuries have been reported.

As day broke Thursday, people in hard-hit areas surveyed obliterated homes and debris-strewn streets. Some told of deadly winds whipping through within seconds of weather alerts broadcast during the storms Wednesday afternoon and evening

"It happened so fast it was unbelievable," said Jerry Stewart, a 63-year-old retired firefighter who was picking through the remains of his son's wrecked home in Pleasant Grove, a suburb of Birmingham. "They said the storm was in Tuscaloosa and it would be here in 15 minutes. And before I knew it, it was here."

He and his wife, along with their daughter and two grandchildren, survived by hiding under their front porch. Friends down the street who did the same weren't so lucky — Stewart said he pulled out the bodies of two neighbors whose home was ripped off its foundation.

Alabama Gov. Robert Bentley said at a news conference Thursday that 194 people had died because of the storms, while there were 33 in Mississippi, 33 in Tennessee, 14 in Georgia, five in Virginia and one in Kentucky.

President Obama said he would visit Alabama Friday to view damage and meet with the governor and families devastated by the storms. Mr. Obama has already expressed condolences by phone to Bentley and approved his request for emergency federal assistance.

"The loss of life has been heartbreaking, especially in Alabama," Mr. Obama said during an appearance at the White House Thursday afternoon, adding that the damage in some areas is "nothing short of catastrophic."

The National Weather Service's Storm Prediction Center in Norman, Okla., said it received 137 tornado reports into Wednesday night. The storms forced authorities in some places into makeshift command posts after their headquarters lost power or were damaged, and an Alabama nuclear plant was using backup generators to cool units that were shut down.

A tornado expert at the Oklahoma center said it appears some of the tornadoes were as wide as a mile and likely packed a wallop that only 1 in 100 twisters ever reach. It will be days, however, before scientists make an official determination.

Some of the worst damage was in Tuscaloosa, a city of more than 83,000 that is home to the University of Alabama. Neighborhoods there were leveled by a massive tornado caught on video by a tower-mounted news camera that barreled through late Wednesday afternoon.

"When I looked back, I just saw trees and stuff coming by," said Mike Whitt, a resident at DCH Regional Medical Center who ran from the hospital's parking deck when the wind started swirling and he heard a roar. (At left, watch a large tornado passing through Tuscaloosa, Ala., as seen from the University of Alabama.)

On Thursday morning, he walked through the neighborhood next to the hospital, home to a mix of students and townspeople, looking at dozens of homes without roofs. Household items were scattered on the ground — a drum, running shoes, insulation, towels, and a shampoo bottle. Streets were impassable, the pavement strewn with trees, pieces of houses and cars with their windows blown out.

Dr. David Hinson was working at the hospital when the tornado hit. He and his wife had to walk several blocks to get to their house, which was destroyed. Several houses down, he helped pull three students from the rubble. One was dead and two were badly injured. He and others used pieces of debris as makeshift stretchers to carry them to an ambulance.

"We just did the best we could to get them out and get them stabilized and get them to help," he said. "I don't know what happened to them."

Back from an aerial tour Thursday morning, Tuscaloosa Mayor Walter Maddox said the tornado tore a streak of "utter destruction" through the city. There were at least 36 people dead in the city's police jurisdiction, and searches continue for the missing.

"We have neighborhoods that have been basically removed from the map," he said.

Because the city's emergency management building was destroyed, authorities are using Bryant-Denny Stadium at the University of Alabama as a command post.

University officials said there didn't appear to be significant damage on campus, and dozens of students and locals were staying at a 125-bed shelter in the campus recreation center.

The storm system spread destruction from Texas to New York, where dozens of roads were flooded or washed out. The governors of Alabama, Mississippi and Georgia issued emergency declarations for parts of their states.

Tornado watches were in effect Thursday for some areas from Georgia to Maryland.

Dave Imy, a meteorologist with the prediction service, said the deaths were the most since a tornado outbreak killed 315 people in 1974.

A research meteorologist at the Oklahoma prediction center, Dr. Harold Brooks, said the average tornado is on the ground for a couple of miles, measures a couple hundred yards wide and packs top winds of 100 mph. He said most reasonably built structures can withstand storms like those, but the ones that hit Wednesday appeared much stronger.

"There's a pretty good chance some of these were a mile wide, on the ground for tens of miles and had winds speeds over 200 mph. Well, that's obviously a bigger problem," he said.

Brooks said there is some evidence that a single tornado could have started at the Mississippi-Alabama state line before plowing through Birmingham and Tuscaloosa and into Georgia. If that's the case it could be among the longest-tracking tornadoes in history.

In Alabama, where as many as a million people were without power, Bentley said 2,000 national guard troops had been activated and were helping to search devastated areas for people still missing. He said the National Weather Service and forecasters did a good job of alerting people, but there is only so much that can be done to deal with powerful tornadoes a mile wide.

"Well, I think this is the worst natural disaster in many, many years in Alabama," Bentley told "The Early Show" Thursday. (At left, watch Alabama Gov. Robert Bentley on "The Early Show.")

The storm also forced the Browns Ferry nuclear power plant about 30 miles west of Huntsville to shut down its three units because of damage to the utility's transmission lines, the Tennessee Valley Authority said. Diesel generators were being used to cool the reactors. The safety systems operated as needed and the emergency event was classified as the lowest of four levels, the Nuclear Regulatory Commission said.

The storms came on the heels of another system that killed 10 people in Arkansas and one in Mississippi earlier this week. Less than two weeks earlier, a smaller batch of twisters raced through Alabama, touching off warning sirens, damaging businesses and downing power lines in Tuscaloosa, but there were no deaths there then.

In Smithville in northeastern Mississippi, the police station, post office, city hall, an industrial park with several furniture manufacturing facilities and a grocery store were among dozens of buildings ripped apart. A church was cut in half, and pieces of tin were wrapped high around the legs of a blue water tower.

Jessica Monaghan, 24, walked through the wreckage with her 9-month-old son, Slade Scott, strapped to her back, and the baby's father, 23-year-old Tyler Scott, by her side.

Their house was still standing, though the home belonging to Tyler Scott's mother was flattened. He was at work — he's a firefighter in nearby Tupelo — and Monaghan was at home watching TV when broadcasters warned the town could be hit within 10 minutes. By then, she said, the storm was there.

"The baby was already in the closet. I grabbed the cat and got in the closet, too," Monaghan said. "You could just feel the pressure. It really was like a freight train."

And in Pleasant Grove, Samantha Nail surveyed the damage in the blue-collar subdivision where hers was the only home still intact. The storm slammed heavy pickup trucks into ditches and obliterated tidy brick houses, leaving behind a mess of mattresses, electronics and children's toys scattered across a grassy plain where dozens used to live.

"We were in the bathroom holding on to each other and holding on to dear life," Nail said. "If it wasn't for our concrete walls, our home would be gone like the rest of them."