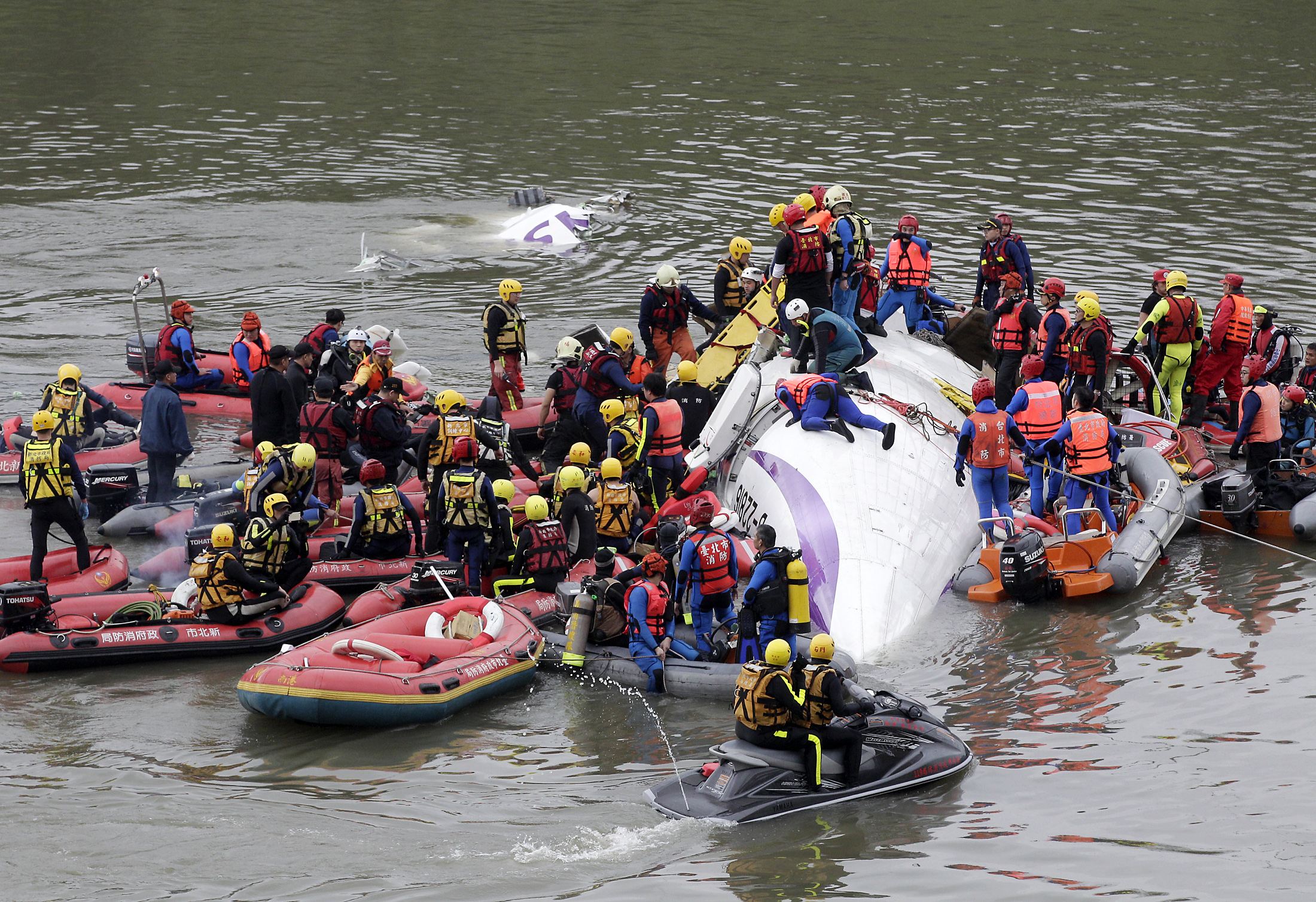 TAIPEI, Taiwan -- Rescuers used a crane to hoist a wrecked TransAsia Airways plane from a shallow river in Taiwan's capital late Wednesday as they searched into the night for 17 people missing in a crash that killed at least 26 others.

Flight 235 with 58 people aboard - most of them travelers from China - banked sharply on its side shortly after takeoff from Taipei, clipped a highway bridge and then careened into the Keelung River.

Rescuers in rubber rafts pulled 15 people from the wreckage during daylight. After dark, they brought in the crane, and the death toll was expected to rise once crews were able to search through previously submerged portions of the fuselage, which came to rest a few dozen meters (yards) from the shore.

Dramatic video clips apparently taken from cars were posted online and aired by broadcasters, showing the ATR 72 propjet as it pivoted onto its side while zooming toward a traffic bridge over the river. In one of them, the plane rapidly fills the frame as its now-vertical wing scrapes over the road, hitting a vehicle before heading into the river.

Speculation cited in local media said the pilot may have turned sharply to follow the line of the river to avoid crashing into a high-rise residential area, but Taiwan's aviation authority said it had no evidence of that.

Taiwanese broadcasters repeatedly played a recording of the plane's final contact with the control tower in which the pilot called out "Mayday" three times. The recording offered no direct clues as to why the plane was in distress.

Reuters reported that after calling out "mayday" one of the pilots said "engine flameout," according to an air traffic control recording on liveatc.net.

It was the airline's second French-Italian-built ATR 72 to crash in the past year. Wednesday's flight had taken off at 11:53 a.m. from Taipei's downtown Sungshan Airport en route to the outlying Taiwanese-controlled Kinmen islands. The pilot issued the mayday call shortly after takeoff, Taiwanese civil aviation authorities said.

TransAsia director Peter Chen said contact with the plane was lost four minutes after takeoff. He said weather conditions were suitable for flying and the cause of the accident was unknown.

"Actually this aircraft in the accident was the newest model. It hadn't been used for even a year," he told a news conference.

Wu Jun-hong, a Taipei Fire Department official who was coordinating the rescue, said the missing people were either still in the fuselage or had perhaps been pulled down the river.

"At the moment, things don't look too optimistic," Wu told reporters at the scene. "Those in the front of the plane are likely to have lost their lives."

Rescuers could be seen pulling luggage from an open plane door to clear the fuselage. Ten inflatable dinghies also searched for the missing.

"I've never seen anything like this," a volunteer rescuer surnamed Chen told the Reuters news agency.

As a drizzle fell around nightfall, military crews took portable bridges to the scene, where rescue workers were building docks for easier access to the wreckage. About 300 rescue personnel and members of the media stood along the banks of the narrow river.

Part of the freeway above it was littered with debris and was closed after the crash.

Relatives of the victims had not reached the scene by dusk Wednesday but some were expected to arrive Thursday, including some flying from Beijing.

The plane's wing hit a taxi on the freeway, and the driver and a passenger were injured, Chen said.

Another ATR 72 operated by the same Taipei-based airline crashed in the outlying Taiwan-controlled islands of Penghu last July 23, killing 48 at the end of a typhoon for reasons that are still under investigation.

ATR, a French-Italian consortium based in Toulouse, France, said it was sending a team to Taiwan to help in the investigation.

The ATR 72-600 that crashed Wednesday is manufacturer's best plane model, and the pilot had 4,900 hours of flying experience, said Lin Chih-ming of the Civil Aeronautics Administration.

Greg Waldron, Asia managing editor at Flightglobal magazine in Singapore, said the ATR 72-600 is the latest iteration of one of the most popular turboprop planes in the world, particularly favored for regional short-hop flights in Asia.

It has a generally good reputation for safety and reliability and is known among airlines for being cheap and efficient to operate.

While it's too early to say what caused the crash, engine trouble or weight shifting were unlikely to be causes, Waldron said. Other possible factors include pilot error, weather or freak incidents such as bird strikes.

"It's too early now to speculate on whether it was an issue with the aircraft or crew," Waldron said.

The accessibility of the crash site should allow for a swift investigation, and an initial report should be available within about a month, Waldron said.