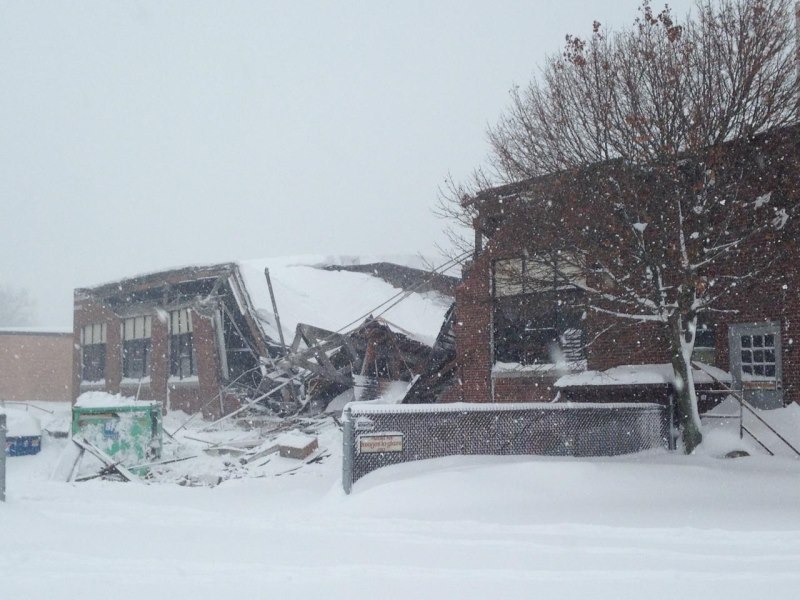 BUFFALO, N.Y. -- Roofs began to creak and collapse under the weight as another storm brought the Buffalo area's three-day snowfall total Thursday to an epic 6 feet or more, with more still coming down.

"Public safety resources in western New York must be fully available to deal with the recovery from the storm," the league said in a statement Thursday night. "We continue our discussions with the team and the Red Cross on ways the NFL can support the community through this weather disaster."

The seats and field of the Bills' stadium south of Buffalo remained buried in snow. Many roads are impassable, and a driving ban remained in place in many communities. New York Gov. Andrew Cuomo was among those urging the game to be postponed, moved or canceled.

"Right now, my sense is it's impractical to do the game because it would jeopardize public safety," Cuomo said earlier in the day.

"The NFL is a business, if the NFL is trying to push the Bills to hold a football game while we're in the middle of an emergency, shame on the NFL," Erie County Executive Mark Poloncarz said before the announcement, CBS affiliate WIVB reported.

"Out of respect for the fans," the Buffalo Sabres postponed their game scheduled for Friday against the New York Rangers.

More than 50 people were evacuated from several mobile home parks in suburban Cheektowaga and West Seneca. Bellevue Fire Department Lt. Timothy Roma said more than a dozen buildings and carports collapsed, as did a metal warehouse operated by a Christmas decorations company, where damage was estimated in the millions of dollars.

About 180 residents were moved out of a nursing home in Cheektowaga due to concerns about the structural integrity of the building's roof, WIVB reported. In Hamburg, the roof of an auto glass company gave way but no one was hurt.

Homeowners and store employees around the region climbed onto roofs with shovels, with officials warning people to also clear snow from heating exhaust vents to reduce the risk of carbon monoxide poisoning.

Things could quickly get worse: Rain and temperatures as high as 60 were in the forecast for the weekend, raising the specter of flooding and an even heavier load on roofs, where the snow could absorb the downpours like a blanket.

"It's getting heavier," said Cheektowaga resident Thomas Mudd Jr., who with his wife spent several hours shoveling 4 to 5 feet off his roof. "It's supposed to warm up and we're supposed to get rain on the weekend, which will make it even heavier. So I didn't want my roof collapsing."

Cuomo begged drivers "pretty, pretty please" to stay off slippery, car-clogged roads in western New York as crews struggled to dig out. Some areas got close to 2 feet of new snow by Thursday afternoon.

The Red Cross said more than 200 people have spent the night at several local storm shelters, which will stay open until further notice, according to WIVB.

State fire officials and volunteers used snowmobiles in Cheektowaga to evacuate residents and deliver supplies to people stranded in their homes.

Some Buffalo-area schools were closed for the third day, burning through snow days with winter still a month away.

A stretch of the New York State Thruway through western New York remained closed with more than 300 truckers idled at truck stops and service areas, waiting for the highway to reopen.

With deliveries interrupted, some grocery stores reported running low on staples like bread and milk.

Even for the Buffalo area -- one of the snowiest and hardiest places in America -- this was one for the record books, with the three-day total close to the nearly 8 feet that the region typically gets in an entire year.

"No matter how you cut it, this event will end up in the top five for the Lake Erie area," said National Weather Service Director Louis Uccellini.

Homes and businesses in the snowy Buffalo area are supposed to be able to handle about 50 pounds per square foot on their roofs, according to Mark Bajorek, a structural engineer. He said some buildings may be close to that now, with more precipitation on the way.