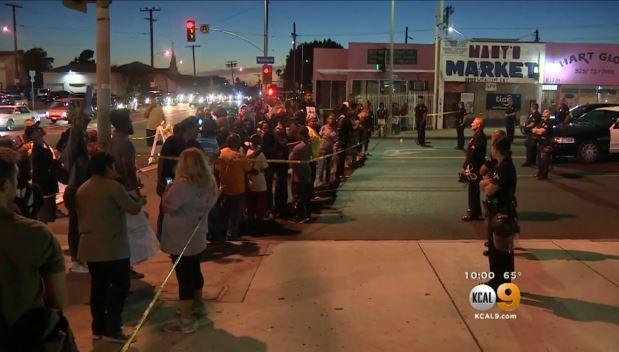 LOS ANGELES- Police shot and killed a young man in south Los Angeles at the end of a car chase on Saturday, sparking a protest after witnesses said the 18-year-old was shot in the back five times while running away with his hands up.

The chase began when officers tried to pull over a car with paper plates, suspecting the vehicle may have been stolen, and the driver refused to stop, Sgt. Barry Montgomery said.

He said the passenger got out of the car during the pursuit and ran into the back of a house, where he was shot. The driver fled the scene and remained on the loose.

Early Sunday morning, the Los Angeles Police Department said in a statement that it found a handgun at the scene of the shooting. The department did not provide any more information about the gun.

The shooting drew several dozen people to the scene. As news of what happened spread, a group of several dozen protesters blocked an intersection near the house Saturday night. Some people waved signs that read “Black Lives Matter,” and others shouted at officers standing behind yellow police tape and wearing riot helmets.

CBS Los Angeles reports that protesters also gathered at L.A. Mayor Eric Garcetti’s house, which was egged along with his vehicle.

Witnesses told CBS Los Angeles the deceased man — believed to be Snell — was running with his hands up, and said he was telling officers he was unarmed, when police shot him about five times.

Relatives of the dead man told the Times Snell was killed on the same street where he lived.

Police have not said how many times Snell was shot or if he was shot in the back.

Trenell Snell, 17, said she was outside with friends when she saw her older brother running from police. She said she started running too, and that she hit the ground when she heard gunfire.

When she got up, her brother was on the ground, handcuffed, she said.

“At the end of the day, the cops came and shot my brother,” she said. “Killed my brother.”

The demonstration is the latest sparked by a series of fatal shootings of black men by officers around the country. This past week, an unarmed black man was fatally shot by police in the San Diego suburb of El Cajon, triggering days of angry, sometimes unruly, protests​. The fatal shooting of a black man armed with a knife by Pasadena, California, police​ on Friday led to two mostly peaceful protests.