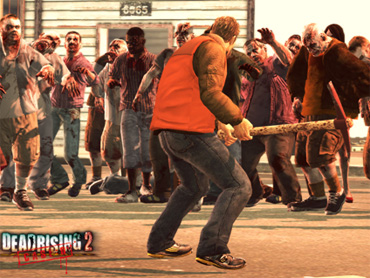 Being a dad can't possibly be easy. Teaching children about the ways of the world, getting them to eat all of their vegetables, protecting the little ones from strangers - these are the responsibilities that we take on as adults when we choose to foster a new generation. Then, the zombie apocalypse happens and suddenly, many of these life lessons are forced to take on a brand new meaning.

This inner struggle with our protagonist's love for his daughter and the outer dangers of a man-eat-man kind of world is central to the story of Dead Rising 2: Case Zero, a stand-alone chapter that serves as a prequel to Dead Rising 2. It takes place in a small desert town by the name of Still Creek, which might have been skipped by the most recent census count (I will forever know that Willamette, Colorado had a population of 53,594 because of the first Dead Rising), but that might be a good thing, because the number of zombies in this town is just ridiculous. As you wander around the dozen or so enterable buildings in Case Zero, you start to wonder just how exactly this small town ever got by with just a smattering of bowling lanes, three hotel rooms, and a lone movie theater that most likely will never get the IMAX treatment.

Clearly, this quaint little town must have been quite the tourist trap, a lesson our main character Chuck Greene and his 4-year-old daughter Katey Greene learn all too well after an initial encounter with the resident townsfolk leads them to become stranded in Still Creek. Of course, this is the point where any normal person would break down and cry, but sorry, no luck for Chuck on this one, since he needs to get his hands on Zombrex, an expensive miracle drug that is the only thing keeping poor Katey from joining the ranks of the zombie horde. And yes, "saving your daughter" is a much more compelling reason than "searching for the truth" when it comes to justifying why our hero chooses to venture out into danger instead of bunkering down and riding it out, especially when the safe room they inhabit is filled with yummy orange juice, snacks, and all the power tools a man could want!

The biggest new feature that Case Zero brings to the table is, of course, the combo weapon system, where two items can be combined to form a super-weapon of zombie destruction. In order to prevent this sort of system from getting out of hand, it seems that the only combinations a player can make are the ones that are the most absurd and visually entertaining. Also, this system only appears to be one level deep, meaning that you can't do something even more awesome like combine the paddlesaw with motor oil in order to create a fire-paddlesaw.

So how much does this new system really adds to the experience? Technically, combining items is not something new to the Dead Rising series - in the first game, we were introduced to the blender, which could combine two food items together to create a new edible concoction that could give the player multiple affects, such as killer spittle and super speed. However, the new weapon system is a bit more visually interesting than creating multi-colored drinks from a blender, and its concept is really in-tune with the game's often comical attempts at bloody zombie violence. Not only are they fun to watch in action, but these weapons are much more efficient at killing zombies than the others and are typically greater than the sum of their parts, yielding a higher Prestige Point count when you kill zombies as well.

One of the major complaints that the Dead Rising series has gotten is concerned with its long loading times when exiting or leaving safe houses and viewing cut scenes. It is very likely that you will experience these load times often if you plan on completing the storyline. What is particularly mind-boggling is the fact that the cut scene associated with combining two weapons together is instantly viewable and skipable with a practically non-existent load time, whereas watching a cutscene showing Chuck Greene walk out of the safe house and look at some zombies can take what feels like to be an eternity in load screens. This issue asserts the overall notion that, at its core, almost everything about Case Zero feels identical to its predecessor - the ticking clock, the mission structure, the method of storytelling, everything. For a sequel to a four-year-old game, Dead Rising 2: Case Zero is surprisingly lacking in innovation. With the lack of either offline or online co-op, we also don't get a chance to try out Dead Rising 2's other major selling point as well, which diminishes Case Zero's overall re-playability value.

Ultimately, what this means is that Dead Rising 2: Case Zero will unlikely change your mind on the series if you hated the first game. While the story definitely seems to be heading off in a better, more personal and relatable direction than the first, it doesn't seem like much of the other gameplay mechanics have followed suit. If you're the kind of person that hates feeling rushed, or thinks the survivor AI is beyond redemption, then you're going to feel exactly the same way about this game. It's likely that you'll get about six hours of entertainment from Case Zero, unless you're one of those people who somehow managed to accumulate over 4 million Prestige Points on opening day. In that case, you'll probably get a lot more. And by the time Dead Rising 2 hits stores, you'll likely never play Case Zero again. The story is a bit of a throwaway in the grand scheme of things, so you won't be missing out if you choose to skip this one, but if you've been itching to get your hands on some third-person zombie action right now and can't wait for the full release, then Dead Rising 2: Case Zero is a great little slice of just exactly what you're looking for.