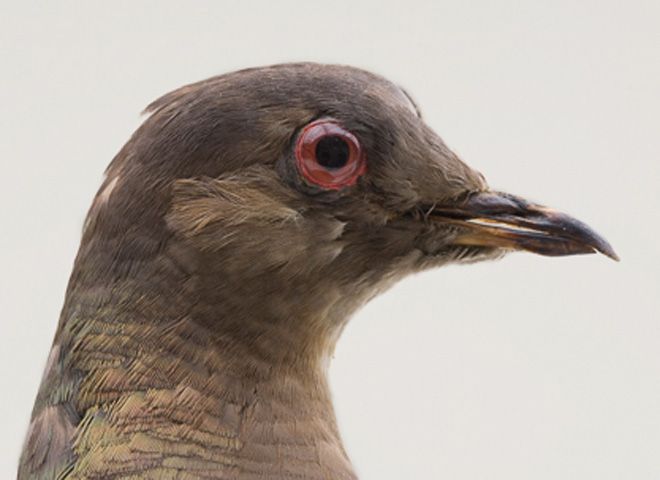 Gone, but not forgotten . . . the extinct passenger pigeon may be making a comeback, which got contributor and National Geographic photographer Joel Sartore thinking:

When I was a boy, I had a Time-Life book called "The Birds." In it was a section showing the few U.S. species we'd already lost to extinction: the Great Auk, the Carolina Parakeet, the Heath Hen. The biggest picture, though, was reserved for the Passenger Pigeon.

Once numbering three billion or more, this species flew in vast flocks, passing overhead for days at a time. Witnesses described seeing a "feathered river in the sky."

Our hungry, growing nation also saw them as delicious, and inexhaustible, and hunted them to near extinction in about 50 years.

In the book was a picture of the very last one, named Martha, stuffed and sitting on a perch in the Smithsonian Museum of Natural History. Next to her was a sign that said "Extinct."

From three billion passenger pigeons to none. I still can't believe it.

Martha died one hundred years ago, on September 1, 1914. Her demise proved to be a watershed event.

People finally began to care about the fate of our nation's wildlife. Conservation groups sprang up, including those formed by hunters to protect habitat, allowing many species to flourish, including grassland birds and waterfowl.

This pigeon's story doesn't end there, though.

In a scene somewhat out of "Jurassic Park," scientists today are actually trying to resurrect this grand bird.

Starting with DNA from preserved museum specimens, the passenger pigeon's genetic code will eventually be spliced into the living cells of a close cousin, the Band-Tailed Pigeon, with the hope of creating something that looks, sounds and perhaps even acts like the real thing.

They're calling the process "De-extinction," and it's not science fiction at all.

Laboratories around the world are working to bring back other long-gone species as well, such as the Pyrenean Ibex, the Tasmanian Tiger, and the Woolly Mammoth.

Scientists say it's not just a matter of if, but when.

Should we be doing this at all, though? That's the question that nags me when we could be trying to save the rare creatures that are still here.

Species like the Florida Grasshopper Sparrow, the Poweshiek Skipperling, and the Relict Darter are all on the very brink of extinction, as are the Florida Panther, the Mountain Yellow-Legged Frog, and the Mississippi Sandhill Crane. Each and every one deserves our full attention.

And doesn't reviving extinct species send a strong signal to the public that they can just relax -- that extinction isn't really forever?


Proponents would argue quite the opposite -- that the excitement surrounding de-extinctions could finally get people to wake up and pay attention to what's happening in the natural world.

To be honest, I don't really know what to think about this impending test-tube menagerie. Are we going back in time to make things right for a few precious species? Or are we doing this just because we can?

What I do know is that second chances are very rare things. So when a new Martha is resurrected, I won't avert my eyes. And I'll be the first in line to bear witness, camera in hand.

"For the Birds": Art, music and birdsong

This week on "Sunday Morning" (October 9)

Maggie Haberman on Donald Trump: "He saw the presidency as the ultimate vehicle to fame"
Thanks for reading CBS NEWS.
Create your free account or log in
for more features.
View CBS News In
CBS News App Open
Chrome Safari Continue
Be the first to know
Get browser notifications for breaking news, live events, and exclusive reporting.