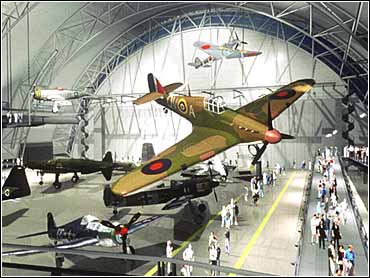 The Smithsonian's National Air and Space Museum is this nation's shrine to aviation. It's also one of the world's busiest museums of any kind, with up to 12 million visitors a year.

How do you top that? You could build a second air and space museum, but make it ten stories high, the size of several football fields, and fill it with 300 airplanes. Add a control tower and put it at the end of a runway at Washington's Dulles International Airport. CBS News Correspondent Bob Orr spoke to John Dailey, the Director of the National Air & Space Museum.

"We don't have ho-hum airplanes in here, these are all front runners," said Dailey, who flew 300 missions in Vietnam in an F-4 Phantom. "Eighty percent of our treasures are mothballed. And that's why we want this facility at Dulles. We will get them on display."

The new museum is scheduled to open in 2003. Until then, everything is jammed into hangars, including:

"There are no replicas in this museum," said Dailey. "These are the real McCoy and that's why it's a priceless collection."

For fliers, aviation is a passion, and for one man that passion has become the cornerstone of the new Air and Space Museum at Dulles.

That man is Steven Udvar-Hazy, president of the world's largest commercial aircraft leasing company. Hazy grew up in Communist Hungary, where travel was not allowed. But young Stephen took his own flights of fancy.

Stephen Hawking in 2011: Heaven is "a fairy story"

Behind the technology of fireworks

"I felt that aviation and flight was almost like an escape to freedom. It was the vehicle through which one could get out into the world," explained Steven Udvar-Hazy.

Now Hazy has given the Dulles museum $60 million, a third of the total cost. And he'll help raise the rest, hoping to put another youngster on a flight of imagination.

"Maybe this museum, because of how impressive it's gonna be, and how overwhelming it's gonna be, maybe it can help create those feelings," said Hazy.