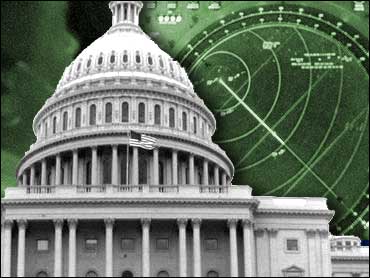 Pilots have flown through the prohibited airspace protecting the White House at least 94 times over the past decade, illustrating the challenges of thwarting a terrorist airstrike on the nation's capital.

Even with military jets patrolling the skies, four commercial airliners and a medical helicopter have crossed into Washington's no-fly zone since the Sept. 11 suicide hijackings, Federal Aviation Administration officials said.

An uproar over a jet that flew over the White House this week prompted disclosures that numerous planes have failed to follow procedures when operating near the nation's capital.

New security requirements imposed in the weeks after Sept. 11 require planes flying into Reagan National, located just across the Potomac River from U.S. landmarks, to properly identify themselves to air traffic controllers before landing. If they fail to do so, then they are diverted.

The Frontier Boeing 737 that failed to veer away from restricted air space over the White House immediately after taking off from Reagan National for Denver had earlier in the day been diverted to Dulles when the same crew failed to follow proper identification procedures on its way into Washington.

No fighter jets were sent to escort the plane and it later landed in Denver without incident. The pilot has been grounded with pay.

In most cases, pilots who violated the airspace protecting the White House, vice presidential mansion and Capitol have gotten penalties less severe than a parking ticket, an Associated Press review of FAA enforcement records found.

Just a month before the September hijackings, a Mesa Airlines flight strayed into prohibited airspace. By November, the matter was closed with a warning letter to the pilot — common for most cases.

Security experts say violations of the Washington airspace highlight a key reality in the fight against terrorism — planes that veer into the zone can crash into government installations within seconds.

"Practically speaking, by the time a violation is discovered, it is too late to do anything to prevent a crash into the White House," former FAA security chief Billie H. Vincent said.

FAA Deputy Administrator Monte R. Belger said Thursday the agency recognizes there's little time to react once planes penetrate the safety zone and so the government has imposed numerous other precautions to ensure planes with ill intent don't get close.

"The restricted area is kind of the last line of defense," Belger said. "The additional on-the-ground security procedures and in-flight protocols put in place give us a much higher level of confidence."

Borders have been tightened; pilots, flight crews and passengers are screened to weed out possible terrorists, and planes approaching Washington must complete authentication procedures, including providing passwords.

About three dozen planes approaching Reagan National Airport have been turned away since Sept. 11 because they didn't complete the verification process, officials said.

Planes that violate the prohibited zone are quickly warned by the flight tower to correct course, and the Secret Service is alerted. Nearly all pilots comply immediately, officials said.

Military planes that patrol the capital skies are permitted to force such planes to land or, as a last resort, shoot them down if pilots don't respond.

In an announcement last fall about improved protection of Washington's airspace, the FAA said pilots who infringed the no-fly zone faced "suspension or revocation of their licenses or a fine."

But FAA's enforcement database, obtained by AP under the Freedom of Information Act, shows nearly all the violators since 1992 have gotten just a warning letter.

One pilot died when he crashed his small plane into the White House in the mid-1990s; no one else was harmed. In 1999, a pilot drifted so close to the White House that agents fired a warning flare. That pilot ended up with a warning letter, FAA records say.

One of the planes hijacked by terrorists took off from Dulles and was flown into the Pentagon.

But the Bush administration relented to political and public pressure and allowed the airport to reopen almost a month after the attacks. Service has been allowed to resume gradually and Reagan National now operates at 75 percent capacity. That is equivalent to roughly 600 takeoffs and landings each day.

"Air security is certainly something we deal with on a daily basis, both with being in constant communication with tower at Reagan and with the FAA," Secret Service spokesman James Mackin said.

One pilot caught in the airspace blamed air traffic controllers, saying they are so busy they sometimes order flight maneuvers that send pilots into the prohibited zone.

"The D.C. controllers are absolutely horrible. Washington National is absolutely the worst place to fly into, period," said Happy Wells, a 30-year veteran pilot from Oklahoma who was cited in July 1997 for flying his charter plane through Washington's prohibited zone.

Wells said his proposed penalty was rescinded after he filed a report with the FAA.

Operators of Reagan National said the violations aren't necessarily a sign of lax security. Pilots can be knocked off course by something as simple as heavy wind.

FAA says it has settled most cases with warning letters because it believes pilots were operating in good faith at an airport considered one of the toughest to navigate.