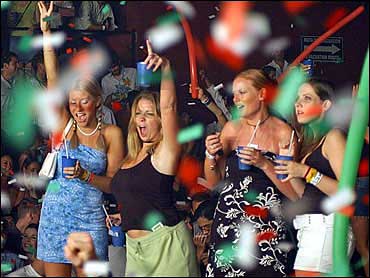 Davis became the first player in school history to return two punts for touchdowns, the second a dazzling 56-yarder with 2:35 remaining to help the Rams avoid a second-half collapse and beat Utah 31-24 Thursday night.

Davis, who had an 89-yard return in the first half, finished with seven returns for 214 yards, shattering Oliver Woods' school record of 149 yards against BYU in 1948. He fell 11 yards short of the NCAA record held by Georgia's Chris McCranie.

"Thank the Lord for Dallas Davis and the special teams," Colorado State coach Sonny Lubick said. "That last return, the way he reversed field, was a thing of beauty."

"This takes away any bonuses we had," Utes coach Ron McBride said. "There are no bonuses now."

Featured with his pet iguanas and tarantulas on ESPN before the game, Davis did his best cheetah impression, running for the game-winning score after Utah had erased a 21-point deficit over a 6:21 span of the third and fourth quarters.

He became the first Colorado State player to return two punts for touchdowns in a game and the latest of many players nationally to accomplish the feat. The most recent was Tinker Keck of Cincinnati, who scored on two punts against Louisville in 1997.

"I'm lucky to have one, let alone two," Davis said. "It's more of a team stat than me. I get the credit. I get the interviews and good food from Mom and kisses. I wish I had enough to share with the rest of the team."

Steve Smith's 59-yard touchdown catch with 11:24 remaining tied the game at 24, but Colorado State's defense was able to hold the Utes on their next two possessions, setting the stage for Davis' heroics.

Davis, whentered the game averaging 11 yards per return, caught Chris Hunter's punt at the 44, darted straight up the middle before cutting toward the left sideline, leaving several Utah players falling in his wake.

Utah trailed 24-3 at the half but rallied on a 1-yard touchdown run by Mike Anderson, Andre Dyson's 47-yard return of a blocked field goal and Smith's sixth touchdown in three games.

The Utes entered the game averaging 34 points but struggled early without ailing quarterback Darnell Arceneaux, who did not practice all week because of strep throat.

Arceneaux, coming off a career-high 266 yards passing last week, did not start and relieved T.D. Croshaw after Colorado State took an 18-point lead midway through the second quarter. He did not return in the second half

"This one hurts," Utah defense tackle Richard Seals said. "We wanted to take this run as long as we could. We had controlled our own destiny, but not anymore."

Colorado State dominated the first half. McDougal had a 1-yard touchdown run in the first quarter, and Davis gave the Rams a 14-3 lead with 12:31 left in the half with the second-longest punt return in school history.

Davis caught the ball on the right side of the field, hurdled one defender and had no trouble beating Hunter to the left sideline. Only Glenn Davis' 90-yard return against Denver in 1926 was longer.

"It's a blessing, I guess," Davis said. "That's all I can say now. Maybe I'll make up some more words tomorrow when I actually get to absorb all this."