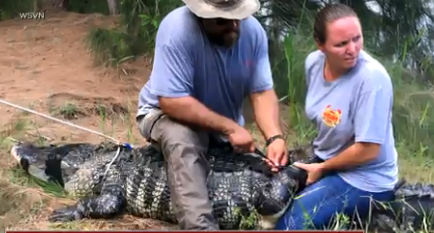 DAVIE, Fla. -- Police have released the 911 recording of a man saying he believed "an alligator got this lady" who had been walking her dogs at a Florida park. The man said he'd watched the woman take her dogs into Silver Lakes Rotary Park, and that he later spotted two of the dogs near her car, while the third was still down by the water.

The caller described the woman, and said "there's a big alligator hanging out right there and she's nowhere to be found."

Two days before Matsuki was attacked, an emailed warning about a trespassing gator was sent out to homeowners in the waterfront community where she lived.

Edwin Gomez, an area resident, was horrified to hear about the attack, CBS Miami reported.

"The gator lurking in one of the lakes is well known to regulars. When I sit in the pavilion, I tell people there's a gator they say, 'OK, this is Florida'," Gomez said. "Everybody walks their dogs. We go there all the time."