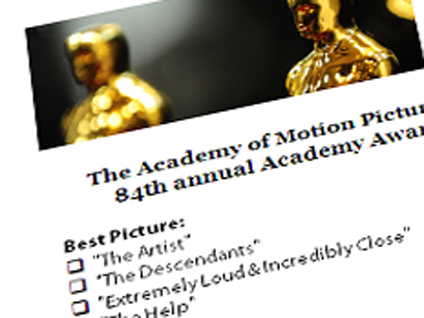 Just hours to go to complete your personal Oscar picks. Our David Edelstein has already chosen his:

This is when I talk about gifted people as if they're hustling politicos instead of artists whose work teaches us to make imaginative leaps, without which we'd be coarse, unreflective, tragically unaware.

I loathe the emphasis on competition.

It's a lock. And it's . . . fine. Tres charmant (if tres long). After years of wordy winners, it's elating to see a movie where every lustrous image reads.

Plus, we congratulate ourselves for seeing a black and white silent film by a Frenchman with an unpronounceable name, even though it's very simple-minded-as well as very loud. It's about a middle-aged celebrity whose star fades while a young tootsie's rises - and never underestimate the resonance of self-pity in Hollywood, especially regarding the onrush of the young and hot.

And no one agrees on anything else.

Dewy-eyed cinema sentimentalists will spring for "The Artist" over the similarly nostalgic "Hugo." ,/P>

My favorite, "War Horse," has as much chance as a stallion in a corpse-strewn No Man's Land - and this ain't no movie!

I also like "The Descendants," poised to win for best adapted screenplay and that's it, despite George Clooney's triumph over miscasting as a workaholic dweeb.

Best Actor will be Jean Dujardin for the rakish curl of one eyebrow and stylized saunter.

Best Supporting Actor? Christopher Plummer - deservedly - in "Beginners" as a man who comes out at 75: He's light, enchanted, liberated. even when cancer strikes after a life of cloaking his sexuality.

Octavia Spencer is sure-fire for her sassy maid in "The Help," and that's OK, although the role is pure Oscar bait. I preferred Janet McTeer as a woman passing for a guy in "Albert Nobbs," but everyone wants the racially-conscious "The Help" to get something.

Speaking of which: The only contest is Best Actress.

People once said it was a lock for Meryl Streep as Margaret Thatcher in "The Iron Lady," another show-offy bit of virtuosity, true, but Streep transcends impersonation and gets into the woman's soul.

But how can you not love the current favorite, Viola Davis, who in "The Help" never goes soft? That self-possession, that hardness, is unexpected and inspiring.

I dunno, I dunno.

I DO know last year's pairing of Anne Hathaway and James Franco as hosts turned out to be such a non-event that maybe Billy Crystal and his schtick won't seem so boringly safe. Maybe he'll riff on the idea he's old, out-of-date, passed over for peppy kids - like the hero of "The Artist"!

Could that have been in voters' minds? Place your bets on the aging and one-time underdogs!

And light a candle for the worthy artists who weren't even nominated, and might wonder if they matter. They matter to me!

Weinstein: "The Intouchables" will make you feel good

The many faces of Meryl Streep

Stars change from Oscars to after-party