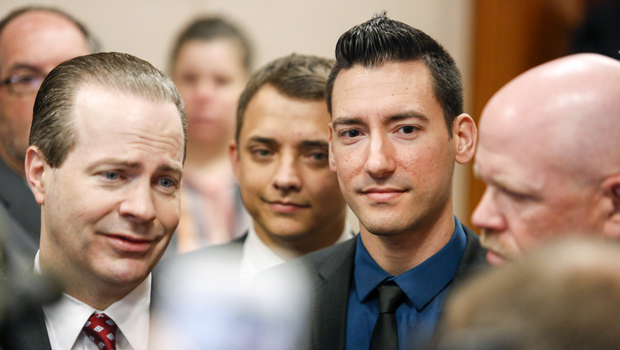 HOUSTON -- An attorney for an anti-abortion activist said Thursday that his client does not plan to accept a proposed plea deal for charges related to making undercover Planned Parenthood videos.

Terry Yates, the attorney for David Daleiden, who faces a felony and a misdemeanor charge, said he is prepared to head to trial if he can't quash the indictment and isn't interested in a probation offer that would keep Daleiden out of prison.

Daleiden surrendered to authorities Thursday, posted $3,000 bond and made two court appearances. "I'm very grateful for all the support from the public," he said afterward.

Daleiden said he hoped there will come a day "when there is no longer a price tag put on human life." The 27-year-old, who has described himself as a "citizen journalist" and has been an activist for years, also criticized Texas authorities for not prosecuting Planned Parenthood.

Sandra Merritt, another activist also charged in connection with the videos, turned herself in Wednesday. Both were indicted on a charge of tampering with a governmental record, a felony punishable by up to 20 years in prison. Daleiden also was indicted on a misdemeanor count related to purchasing human organs that carries up to a year in prison.

Attorneys say the pair plans to plead not guilty. Merritt was also offered probation in a settlement, but her attorneys have not indicated whether she'll take the offer.

It's common to offer pretrial diversion to first-time nonviolent offenders, according to Jeff McShan, a spokesman for the Harris County District Attorney's office. He added that the offers are "the right thing to do."

The district attorney's office initially launched a grand jury investigation to look into Planned Parenthood after the undercover videos indicated that the nation's largest abortion provider could be illegally selling fetal tissue to make a profit.

The grand jury cleared Planned Parenthood of misusing fetal tissue, opting instead to indict Daleiden and Merritt, who made the videos and are accused of using fake driver's licenses to get into a Houston clinic.

The video footage showed them posing as representatives of a company called BioMax, which purportedly procured fetal tissue for research. Planned Parenthood has said the fake company offered to pay the "astronomical amount" of $1,600 for organs from a fetus. The clinic said it never agreed to the offer.

The activists' attorneys have acknowledged the two used fake driver's licenses but that their actions weren't meant to defraud or harm the abortion provider, and that they never intended to buy human organs.

Defense attorneys also said the charges won't stand up in court and have asked for the case to be dropped and the evidence to be resubmitted to another grand jury for possible charges against Planned Parenthood.

District Attorney Devon Anderson has said that she won't resubmit the case because she respects the grand jury's decision "even if it conflicts with my personal beliefs," which Anderson described as "pro-life."

Planned Parenthood spokesman Eric Ferrero said Thursday that "the wheels of justice have only begun to roll," and that the group doesn't "expect this to be the last time these extremists are booked and fingerprinted."

Daleiden's next hearing is scheduled for March 28.