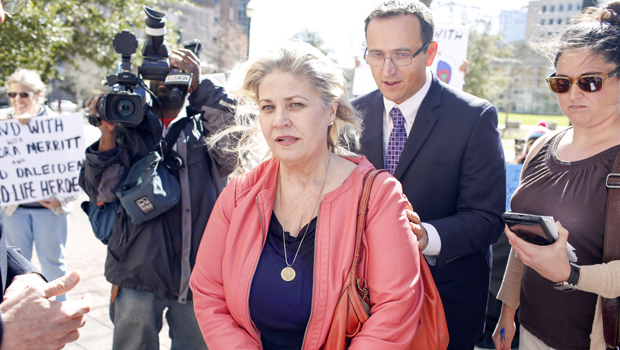 HOUSTON -- One of the two anti-abortion activists indicted last month after making undercover videos about Planned Parenthood turned herself in Wednesday to Texas authorities.

Sandra Merritt appeared in a Houston courtroom and posted bond, which was reduced from $10,000 to $2,000. The other indicted activist, David Daleiden, was scheduled to turn himself in Thursday.

Both are charged with tampering with a governmental record, a felony punishable by up to 20 years in prison. Daleiden also was indicted on a misdemeanor count related to purchasing human organs that carries up to a year in prison. Their attorneys have said the two activists plan to plead not guilty.

Warrants had been issued for Merritt and Daleiden's arrests following their indictments on Jan. 25. But the activists' attorneys had made arrangements with authorities to have them voluntarily come from California, where they live. State records show Merritt lives in San Jose, has operated a tutoring business and has held a cosmetology license since 1982.

Merritt declined to comment Wednesday, but stood beside attorney Dan Cogdell as he criticized the prosecution.

Harris County prosecutor Britni Cooper said Merritt can settle the case through pretrial diversion, which is a form of probation typically offered to nonviolent first-time offenders. If Merritt maintains a clean record while on probation then the charge could be dismissed, Cooper said.

"We felt like it was the right thing to do," Cooper said, adding that Merritt hasn't indicated whether she'll accept the offer.

Merritt will return Wednesday to California, Cogdell said, and has a court date scheduled for March 28.

The grand jury cleared Planned Parenthood of misusing fetal tissue, opting instead to indict Daleiden and Merritt, who made the videos and are accused of using fake driver's licenses to get into a Houston clinic.

The video footage showed them posing as representatives of a company called BioMax, which purportedly procured fetal tissue for research. Planned Parenthood has said the fake company offered to pay the "astronomical amount" of $1,600 for organs from a fetus. The clinic said it never agreed to the offer.

The activists' attorneys have acknowledged the two used fake driver's licenses, but Cogdell said their actions weren't meant to defraud or harm the abortion provider, and that they never intended to buy human organs. The attorneys also have asked Anderson to drop the case and resubmit the evidence to another grand jury on possible charges against Planned Parenthood.

Anderson has said that she won't resubmit the case because she respects the grand jury's decision "even if it conflicts with my personal beliefs," which Anderson described as "pro-life."