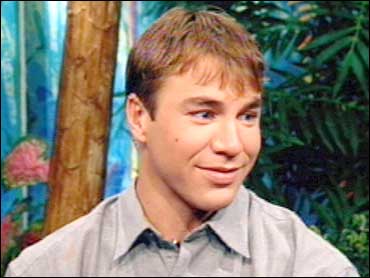 Dave Johnson, the 24-year-old rocket scientist from Pasadena, Calif., says he knew he was in trouble in the "Survivor: The Amazon" game when Roger, the original tribal leader, was voted out of the Jacaré tribe last week.

" I thought I might have gotten a couple votes," he told Julie Chen on The Early Show. "You just gotta get the majority. But it didn't happen. And so it goes."

In an 8-1 vote on the latest episode, Dave was voted off. Perceived as a strong competitor and therefore a threat to others, his tribe members sent him packing at Tribal Council.

"I think once I saw that, I was out of the loop," he said of the vote against Roger. "Once Roger really got all the votes, it was apparent that I really didn't have a good idea, a grasp, of what was going on behind the scenes. I kind of anticipated both Alex, Jenna and Heidi to keep me up to speed. And didn't work out so good.

Julie noted that after he had won the luxury challenge and had taken Deena to the bathtub/dessert reward, he tried to work a deal to stay on.

He agreed. "Yeah. You know, you know your name's coming up next. You want to do everything you can to help stay on for another three days."

And yes, he did realize that Deena had an alliance going with Heidi and Alex.

So, Julie wanted to know, "Is that why you were holding hands, sleeping at night with Heidi?"

"No, no," Dave protested. "You gotta realize that any body is far more comfortable to sleep against than rocks and logs and whatnot. So it was Heidi and she's a good buddy and it just happened to be that she was next to me."

Rob had seemed a little jealous of the Heidi-Dave hookup, Julie said. "That was Rob giving you the evil eye. Rob was not having any part of you. What was going on there? Did you realize Rob was against you?

"Rob played the game really well. He goes with his strength. He's very good at being deceiving and conniving, and unfortunately, I didn't pick up on it soon enough."

Julie pressed on. "So, OK, let me get this straight, you tried to work Deena over and get her to change her mind. She said she would do what she could."

"I think it was most certainly trying to stay warm at night and trying to get the best night's sleep," he answered. "There really wasn't anything more than that. She's just a great person and a great ally. And a great pillow, too, I guess."

Like most contestants on Survivor, Dave seemed to have a good attitude about the game and wasn't too bitter about being voted off.

"You know, everybody who's out there wants to stay out there as long as possible. I played the game the best I knew how. Had a great time, and made it to the jury. Unfortunately I didn't go all the way."

In the real world Dave is a rocket scientist. He designs and builds spacecraft. Unlike many other contestants, he says, he has no desire to break into Hollywood. "I like to build stuff that goes into space. As much fun as this has been, I think I'll stick with that."

He explained why he went on Survivor.

"For the experience, for the adventure, for the challenge. And certainly a million bucks in the back pocket wouldn't be too bad, either."

Julie asked if he thought he was voted off because he was too strong? He was good-looking – got a lot of attention from the women. And, he took on a leadership role that maybe people didn't like.

"I went out there and I was myself," he said. "And you know, I don't think that this game was -- should have been anything except being who I am and having a good time. And I went with that the whole way and unfortunately it didn't work out."

O.J.'s Trial And Its Impact