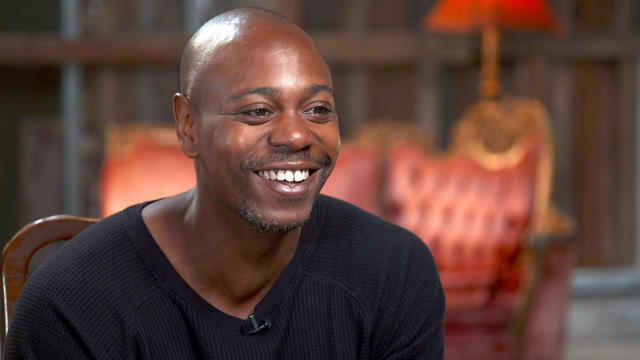 For more than 30 years, Dave Chappelle has been making people laugh. He studied theater at a performing arts high school in Washington and started sneaking into comedy clubs when he was 14. His career exploded after two hilarious seasons of "Chappelle's Show" on Comedy Central, and then famously walked away at the height of his success.

"I was talkin' to a guy… he basically said to me that comedy is a reconciliation of paradox," Chappelle told "CBS This Morning" co-host Gayle King. "And I think that that was a irreconcilable moment for me. That I was in this very successful place, but the emotional content of it didn't feel anything like what I imagined success should feel like. It just didn't feel right."

Chappelle's now back, this time with a three-part stand-up comedy special on Netflix, premiering Tuesday.

But Chappelle revealed he does miss his former show. "But 'Chappelle's Show's' like breakin' up with a girl and you still like her. But in your mind you're like, 'That b**** is crazy. I'm not goin' back,'" Chappelle said, chuckling.

Chappelle not only left the show, walking away from a $50 million deal, but he also left the country, going to South Africa to escape.

"Did the fame scare you?" King asked.

"Fame, yeah, but not so much that I get on a plane to Africa. Fame is not that kind of scary. But it is – fame is a horrifying concept when it's aimed at you, you know?" Chappelle said. "At the end of the day, it's so – you don't have that much control over it. You just try to conduct yourself as best you can."

For two seasons his best was Comedy Central's "Chappelle's Show." It was critically acclaimed and wildly popular.

"Even when you walked away in 2005, you were still working. It's just that we didn't know all the things that you were doing. You really stayed low," King said.

"I found an altitude I was comfortable with. I found a way that – to do what I liked to do and avoid some of the parts of it that I was uncomfortable with," Chappelle said.

"What were you uncomfortable with?" King asked.

"Well, I mean, if you look at me, right, physically – now, I'm, like, 40 pounds heavier than I was when I did 'Chappelle's Show.' And people are like, 'How did you gain all that weight?' By resting and eatin' and payin' attention to myself. I have actual relationships with my kids," Chappelle said. "I've been all over the country, touring all my life. But I never saw anything. Now I've seen everything. I could talk to people or I could – I had time to stop if someone said they liked me. It wasn't like I brushed past 'em like, 'I don't want to hear it.' I had time to stop like, 'You do?' You know what I mean? It's like – it was just, like, the way that I engaged the world was different."

He's starting to get to a point, he said, where he'd like for his life to "mean something" – like when he went to Allen University in Columbia, South Carolina and wanted to talk to the students. His great-grandfather, Bishop William David Chappelle, was once president of the university.

"It's okay to be afraid because you can't be brave or courageous without fear. The idea of being courageous is that even though you are scared, you just do the right thing anyway. So in 2004, I walked away from $50 million and in November, I made a deal for $60 million," he told the students in a speech at Chappelle Auditorium.

He also went to the church, Chappelle Memorial AME Church, also named after his great-grandfather, a piece of his family's history he wanted to explore.

Chappelle's own history is rooted in stand-up comedy. He started performing when he was only 14.

"Do you remember when you got your first laugh?" King asked.

"Yeah, first night I was on stage. I can remember who introduced me. I can remember what my introduction was. I can remember the whole thing," Chappelle said. "This guy named J.T. Newton, he said, 'You know, folks, everybody starts somewhere. And tonight this young man is doin' stand-up comedy for the first time.' He goes, 'And who knows? We may be witnessing the birth of a star. Please welcome Dave Chapel [sic].' That was it."

"But I did pretty good. They were like screamin'. And he's like, 'That's all for you, kid. That's all for you.' But they would treat it like I was in the Make a Wish Foundation or somethin'. And they just wanted to give me a little boost. But it was encouraging, man. And it felt so good, you know? You'll go through a million bad nights to get those good ones," Chappelle said.

"What do you want us to feel in there?" King asked.

"It's like, you know, love and camaraderie and kinship, you know? It's just a reminder. Like, and my town is so small, you throw an event like that in town, it's the big dance," Chappelle said.

That small town is about 20 miles outside of Dayton, Ohio, and far away from the pressure of big city life. Sometimes, Chappelle will walk on the streets at night.

"Especially when I first get back from the road if it's nice out. Scary, too," Chappelle said.

"Raccoons. You can hear 'em, like, rustling in the woods," Chappelle said.

"You scared of raccoons?" King asked.

"Yeah. Very much so," he said. "That's an irrational fear that I just have."

The town is progressive and artsy, a place Chappelle said he's treated like a neighbor – not a big star.

"Are you calmer here?" King asked.

"Generally speaking, yeah," Chappelle said. "I have time to think about things. And I think for a comedian, if you don't have time to think, you're just not as effective. That if you-- you know, it gets a little corporate."

It's that corporate feel he left behind when he departed Comedy Central, where Key and Peele became the comedians to watch.

"I think there was a speculation that Dave doesn't like Key & Peele or Dave thinks, 'Okay,'" King said.

But when he was doing "Chappelle's Show," he said there were "certain conventions of the show that the network resisted."

"I fought the network very hard so that those conventions could come to fruition," Chappelle said. "So, like the first episode I do, that black white supremacist sketch. And it's like, 'Well, that's 10 minutes long. It should be five minutes long.' Why should it be five minutes long? Like, these types of conventions. I fought very hard. … So when I watch 'Key & Peele' and I see they're doing a format that I created, and at the end of the show, it says, 'Created by Key & Peele,' that hurts my feelings."

"You tell jokes from everything, from race to politics … do you worry about crossing the line or is there a line that you won't cross?" King asked.

"Comedy is weird. The line, the line moves. It changes," Chappelle said, adding, "but I think a lot of, especially in comedy, a lot of it has to do with intent."

"And your intent is?"

"To make people laugh, to reconcile paradox. I'm, like, just openly – sometimes openly venting. I think that when you get to a certain altitude, there's more scrutiny over the things you say, 'cause the platform is so powerful," Chappelle said.