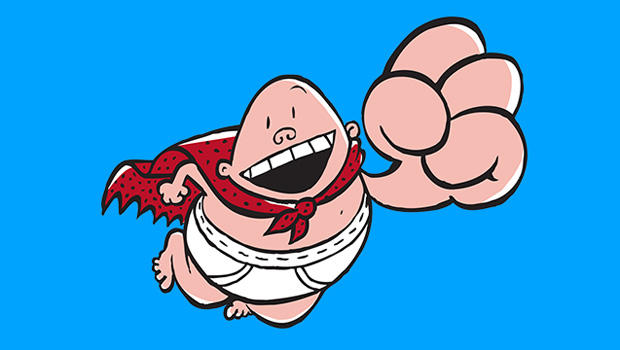 Time now for a "brief encounter" ... the one our Rita Braver enjoyed with an author who's refashioned children's literature:

Why is David "Dav" Pilkey posing in a pair of giant tighty whities at a book appearance? Because he's the author and illustrator of the hugely popular "Captain Underpants" series -- also a big movie this past summer.

It's about a mean grade school principal who is hypnotized by two fourth graders into becoming a comic book character they have created. ["You are now the greatest superhero of all time: Captain Underpants!"]

But the real superheroes in the Captain Underpants saga are the boys, who share some important traits with Dav Pilkey himself: "They have something called ADHD -- attention deficit hyperactivity delightfulness, is how I prefer it," Pilkey smiled. "Everyone else calls it a disorder, but I had a lot of the same problems. I misbehaved, couldn't stay in my seat, I couldn't sit still, I was always looking out the window or daydreaming. And so I really do identify with kids who are outsiders in the classroom."

And the kids who flock to meet Pilkey, now 51, love hearing how he dreamed up Captain Underpants in second grade, just outside Cleveland. His classmates thought it was hilarious -- but his teacher?  "She took that drawing away from me, right out of my hand and ripped it up right in front of me, and she pointed to the classroom door and said, 'Mr. Pilkey, out!'"

His mom and dad, however, encouraged his cartooning, helping him overcome his learning disabilities and the constant criticism from school: "'He can't read, he's not fitting in, he's not behaving' … I always came home to a safe place and a place where I was encouraged and got so much love," Pilkey said.

He made it to college, and it was there that a kinder teacher noticed his gift for writing and drawing: "She took me aside one day and said, 'Have you ever thought about writing children's books? I think you'd be good at that,'" he recalled. "And so I wrote my first children's book within the month. I entered it into a contest, and I won the contest, and that's how it all started."

He would go on to write and illustrate several books, including "World War Won," "'Twas the Night Before Thanksgiving," "The Paperboy," and the "Dumb Bunnies" series. But when he tried to get publishers interested in "Captain Underpants," "Took one look at it, 'Nope,' they sent it right back."

After sending it to about 20 publishers, he reworked the story, and it was published 20 years ago this month. There are now 80 million copies in the series in print.

A Captain Underpants spin-off, called "Dogman," is now at the top of the children's bestseller lists. And Pilkey cheerfully acknowledges that all of his work features loads of bathroom jokes.

Why the potty humor?

"When I was in second grade, that was what made everyone laugh," Pilkey said. "If you put underwear or poop or diarrhea, especially, in a book, everyone loved it!"

Dav dreams up those funny books at the home he shares with his wife, Sayuri, on a picturesque point on Bainbridge Island, Washington. The two have no children of their own.

But Dav Pilkey says, his whole life is inspired by the kids he's met along the way: