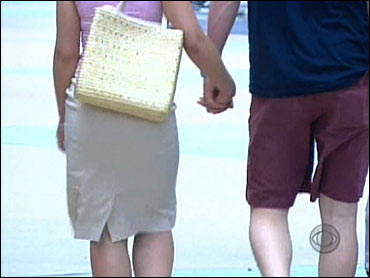 In today's hurried world, many singles are on the move, focused on their careers, and love often takes a back seat -- not only leaving love behind, but singles in need of help in finding it.

And that's where "dating school" comes in.

Who even knew there was such a thing?!

In its "classes," you learn what you've been doing wrong so you can start doing them right, and find someone right for you, consumer correspondent Susan Koeppen explained Thursday during The Early Show's weeklong series, "How To Date In 2008."

Basically, the "school" offers "dating coaching," teaching how to love yourself so you can love another, says Dr. Paulette Sherman, a psychologist who owns "My Dating School" and who wrote the book "Dating From The Inside-Out: Using The Law of Attraction in Matters of the Heart".

Knox is a 34-year-old sales manager who's never been married, except to her job -- but feels it's time for a change -- and finding a man is a priority.

"I have a mind of my own. I am extremely independent," she asserts.

What's keeping her from finding the perfect mate? "I've probably set the bar too high and have been unrealistic in my expectations," Knox admits.

Sherman says the biggest mistake people make when trying to meet someone is "not being yourself. ... But the point is to really know who you are and find a good match for yourself."

Sherman teaches what she calls the inside out approach, which she says involves being "clear what isn't working, your limiting beliefs, your past conditioning, what you're afraid of. And kind of move that out of the way ... or be conscious of that. Then, be clear what you want and don't want."

"I don't think I do a good job of letting the man know I need him," Knox observed.

Sherman says one of Knox's main obstacles is getting over the fear of being rejected.

As Knox herself put it, "I don't wanna set myself up to get hurt. And so, therefore, I may avoid situations or events -- for example -- speed dating."

Which is precisely where Sherman and The Early Show sent her -- to a speed-dating event in Manhattan. She got to chat with plenty of guys -- and only for a few minutes with each.

"I am actually having a lot of fun meeting people!" Knox said. "It's long enough, but not too short. It's going really well. I've actually gone on six "dates" (at the event) and I can say there are three that I'm saying, if those guys pick me, I would probably go out with them."

So, Koeppen noticed, Knox, a woman who only gave guys one chance and one date, is taking baby steps to finding the man of her dreams.

The one guy she went out with who she met at the event asked her to split the bill, Knox says, and that's a deal-breaker! "I haven't read an obituary announcing chivalry is dead!" she says.

The most important thing she learned from dating school, Knox says, was to give guys more than one chance and go to "target-rich" environments, where she can find a man she wants.

TO SEE MANY TIPS ON DATING FROM SHERMAN, click here.

TO GET INSIGHT FROM SHERMAN ON WHAT SHE CALLS DATING MYTHS, click here.