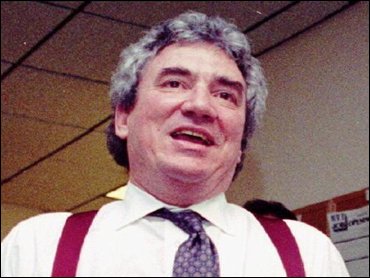 Top executives at The New York Times told hundreds of staffers at a town hall-style meeting that they were sorry for mistakes and oversights that allowed former reporter Jayson Blair to fabricate and plagiarize material.

The Wednesday afternoon meeting was called after the newspaper found that Blair "committed frequent acts of journalistic fraud" in stories from last October through April.

Reporters, editors and photographers crowded into a theater behind the Times' midtown offices for the session, which was closed to other media and lasted more than two hours.

"I've received a lot of advice on what to say to you today, all of it well-intended," Executive Editor Howell Raines told the staff, according to a statement issued by the Times.

"The best came from reporters who told me to speak to you from my heart. So the first thing I'm going to tell you is that I'm here to listen to your anger, wherever it's directed. To tell you that I know that our institution has been damaged, that I accept my responsibility for that, and I intend to fix it."

Reporter John Wilford said many questions focused on the breakdown in communication that allowed Blair to remain at the newspaper — and be given national assignments — even after he repeatedly made mistakes during an earlier assignment on the paper's metro desk.

"I heard a lot of people ask questions about the desire for better communications (from) the reporters all the way up, instead of just from the top down," Wilford said.

Raines, Publisher Arthur Sulzberger Jr. and Managing Editor Gerald Boyd led the meeting. In their opening remarks, the Times said in a statement, "the executives apologized for the mistakes they made and the pain caused by their oversights."

One reporter asked whether Raines intended to resign, according to a participant. Raines responded that he did not plan to leave the Times, and Sulzberger said he would not accept the editor's resignation even if it were submitted.

Some staffers interviewed after the session complained they did not have sufficient time to ask questions, but others noted the newspaper was working to address problems.

The Times published a 7,500-word story Sunday detailing fabrication, plagiarism and factual errors in 36 stories, most of them over the last five months. They included articles about the investigation into the sniper attacks in the Washington, D.C., area.

Blair resigned May 1, shortly after questions were first raised about his work.

Federal prosecutors have asked the Times for information about Blair, although neither the newspaper nor the prosecutor's office would describe the information being sought. It was unclear what crimes could have been committed.

The Times had not received a subpoena and had not replied to the request, said another newspaper spokesman, Toby Usnik. The inquiry was made informally by James Comey, the U.S. attorney in Manhattan.

Marvin Smilon, a spokesman for Comey, declined comment on any aspect of the inquiry.

Matthew Fishbein, the chief assistant U.S. attorney in Manhattan from 1993 to 1997, said a criminal case would be highly unusual in such circumstances. But he noted the Manhattan prosecutor's office has a reputation for being aggressive and creative.

In this case, Fishbein said, prosecutors could consider charges under mail or wire fraud statutes, which allow cases against defendants who devise a scheme "to deprive another of the intangible right of honest services." He said the charge is most commonly brought against politicians.

Late Tuesday, Blair read a statement to the AP in which he said: "I remain truly sorry for my lapses in journalistic integrity. I continue to struggle with recurring issues that have caused me great pain."

He refused to answer any questions.