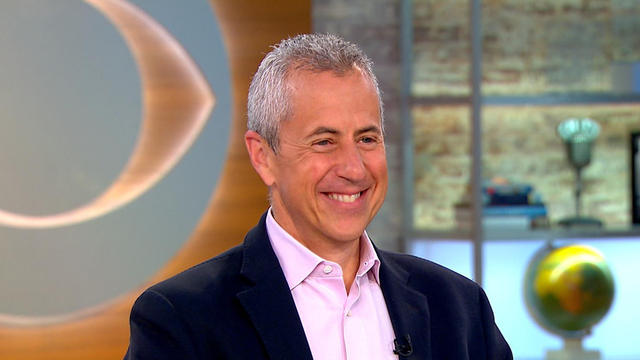 Danny Meyer has been called one of the greatest restaurateurs New York has ever seen with culinary hits like Union Square Café, Gramercy Tavern and Shake Shack.

"CBS This Morning" revealed Tuesday that Meyer is the winner of the third annual Julia Child Award – making him the first non-chef to be honored.

Culinary legend Julia Child is credited with bringing French cooking to the American public through TV and cookbooks. Her career inspired an award in her name to honor her legacy and recognize those who continue to make an impact on American society through food.

Meyer, whose restaurants have won 28 James Beard Awards, joined "CBS This Morning" to discuss how Child continues to inspire him, as well as his next culinary venture – a casual pizzeria.

"Imagine if you were a broadcaster and somebody said you just won the Charlie Rose award. That's kind of how I feel right now," Meyer said of the honor. "I don't think we'd have the Food Network if it weren't for Julia Child."

Meyer described Child as "someone who made you feel good" despite the turmoil going on in the world of her time.

"She made mistakes on TV because it wasn't edited. And she smiled, she made you feel empowered that you could cook. That food was really about joy and pleasure," Meyer said.

Child, who occasionally dined at Meyer's Union Square Café, had a hand in Meyer's inspiration for Shake Shack.

"She told me about a little restaurant in Santa Barbara that she loved called La Super-Rica, which was a walk-up stand serving fantastic Mexican food and I went there before Shake Shack opened. It was hugely inspirational to me," Meyer said.

The CEO and founder of Union Square Hospitality Group said the Santa Barbara spot was also an inspiration for his new pizzeria, Martina.

"[Martina] is going to be an opportunity to serve pizza without the trappings of a full service restaurant," Meyer said. It's scheduled to open this August in New York City.

Asked about the secret to a fantastic hamburger, which helped turn Shake Shack into a global brand, Meyer said, "It's kind of hard to make a hamburger that people don't like."

But ultimately, Meyer's answer takes him back to his inspiration. "The genius of burgers is joy. It gets back to Julia Child. I'm here because of Julia Child today and I can't get away from the fact that she talked about, 'just enjoy your food.'"