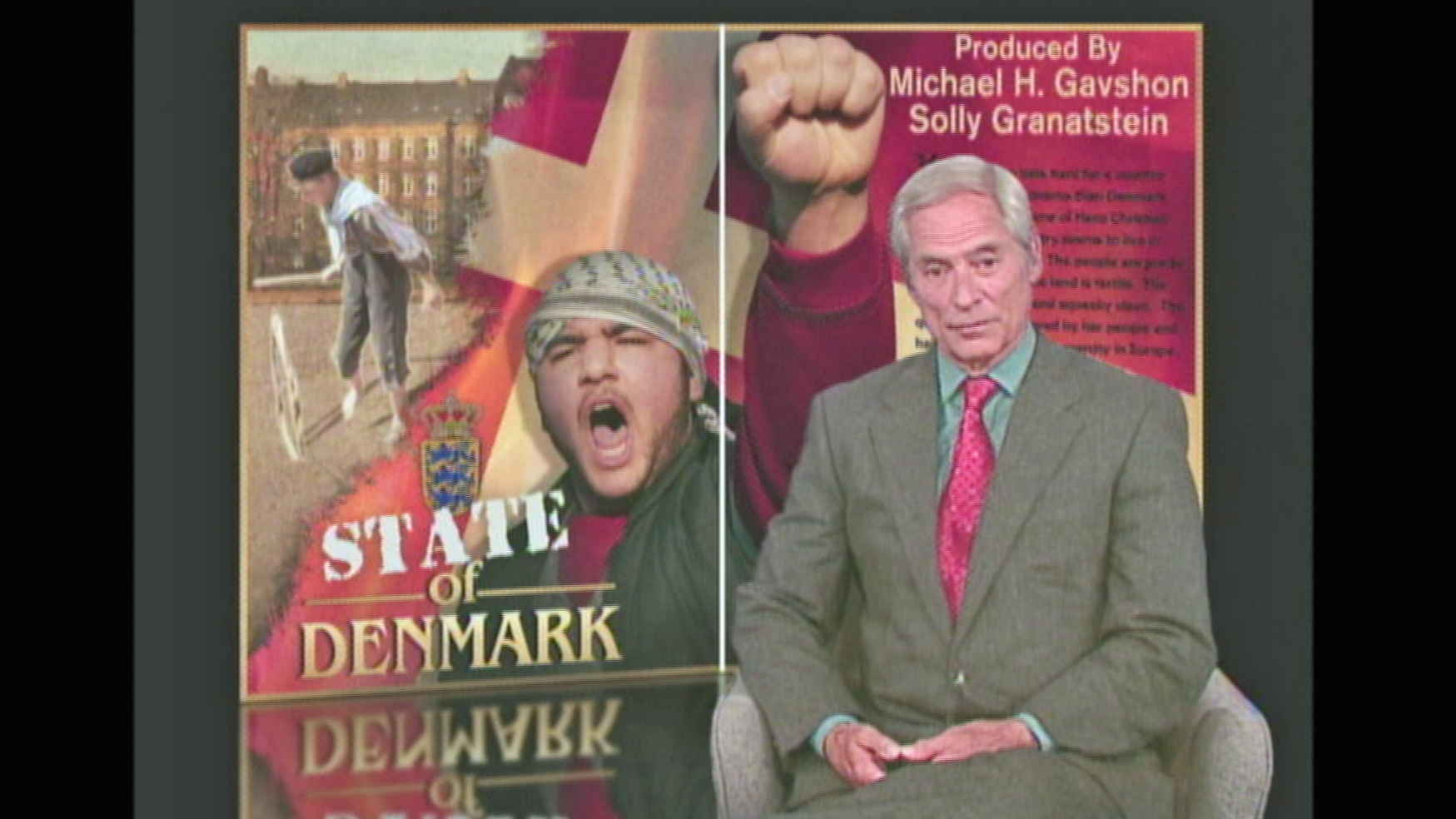 The massacre yesterday at the French satirical newspaper "Charlie Hebdo" is an eerie reminder of a Bob Simon story: the 2005 publication in the Danish newspaper "Jyllands-Posten" of 12 satirical cartoons depicting the Muslim prophet Muhammad. One image shows Muhammad wearing a bomb-shaped turban.

The controversial images led to riots, some of them violent - "from Jerusalem to Jakarta," Bob reported -- against the newspaper, largely by Muslim groups who said the images were blasphemous. Some at the newspaper said they got death threats.

There was also support for the newspaper's decision; "Charlie Hebdo," we recently learned, republished the drawings.

Earlier today, Jyllands-Posten foreign editor Flemming Rose spoke with Charlie Rose on "CBS This Morning." Recalling one of the slain "Charlie Hebdo" editors, Flemming Rose said: "He never wavered in his belief that they had to do what they were doing."

You can watch Bob's full story, "State of Denmark," in the player above.

The following is a script of "State of Denmark," which aired on February 19, 2006. Bob Simon is the correspondent.

You'd have to look hard for a country with a better brand name than Denmark. It's not only the home of Hans Christian Andersen; the country seems to live in one of his fairy tales. The people are pretty and prosperous; the land is green and fertile. The towns are colorful and squeaky clean. The queen is much beloved by her people and hails from the oldest monarchy in Europe. Who could ever imagine that this lovely little land would spark riots sweeping the Islamic world? Is it a quirk, a coincidence? We went to Copenhagen to find out and discovered that there's something really strange in the state of Denmark and that it's no accident the firestorm started here.

The riots from Jerusalem to Jakarta can all be traced back to the most unlikely of places, a cluttered work space in the apartment of Kare Bluitgen, a writer of children's books.

Bob Simon: Embassies are being burned around the world, people are dying in riots and it all began right here in this little living room with you. How does that strike you?

Kare Bluitgen: Quite sad to see what happens now, but I mean I've wrote a book about the prophet Muhammad to promote better understanding between cultures and religions here in Denmark.

Bluitgen had trouble finding someone to illustrate his book. Muslims don't permit representations of their prophet and illustrators were afraid of offending the Muslim community in Denmark. Bluitgen's problem became known to the editors of Denmark's largest newspaper. Its cultural editor, Flemming Rose, said he was offended by what he called the self-censorship. He explained himself in an interview that aired on the BBC.

But Rose has said he wasn't about to submit. Instead, as a challenge, he invited Danish cartoonists to submit cartoons about the prophet, and he printed 12 of them. One showed Muhammad wearing a turban that was really a bomb.

Well, not exactly. The editors of the paper, the Jyllands-Posten, recently rejected the satirical depiction of the resurrection saying it would cause a public outcry. But the paper did print the Muhammad cartoons, all 12 of them, and until last week, Rose defended his decision on just about every broadcast that would have him.

The newspaper insisted from the start that its purpose was to show that there are no higher values in a democratic society than free speech and free expression, and if Muslims want to live here in Denmark, they'd better buy that. But as soon as events started careening out of control last week, the editors of this bastion of free speech reacted by refusing to speak to anyone at all.

Not only that, Flemming Rose, that cultural editor, has been put on indefinite paid vacation and encouraged to leave Denmark. He's resting at a five-star hotel in Washington, DC. But Rose and the newspaper have their defenders, including the editor of a rival paper, Toger Seidenfaden.

Toger Seidenfaden: The way I've put it and we've been saying in our editorials for some time is we are defending our right to be stupid. We think that being stupid is part of freedom of speech.

Bob Simon: When Jyllands-Posten published these cartoons, did they have any idea?

Toger Seidenfaden: No. I don't think they had any idea that they would be an international crisis, certainly not one of this size. But of course, they--they were doing it to get reaction from the local Muslim religious minority, and they said so very explicitly. And they explained on their front page that they were doing this and I quote, "to teach religious Muslims in Denmark that in our society they must accept to be scorned, mocked and ridiculed.

Bob Simon: They were stirring it up.

Toger Seidenfaden: It was very much stirring it up.

If the paper was trying to stir it up, it succeeded. Imam Ahmad Abu Laban is not preaching in Cairo or Baghdad. This is downtown Copenhagen.

Imam Ahmad Abu laban: And that's why we believe in him, we love him and we keep on defending him.

Bob Simon: What do you think was on the minds of the editors of the newspaper when they published the cartoons? What were they trying to accomplish?

Imam Ahmad Abu laban: They were trying to be teachers, to teach us democracy, the values of democracy and most importantly, how to abide to those values. Love it or leave it. This is the way it goes, my dear student pupil, listen carefully. I try to help you.

Bob Simon: Which of the cartoons did you find most objectionable?

Imam Ahmad Abu laban: The turban and the bomb. This is the number one.

Why did you refuse, sir?

Prime Minister Anders Fogh Rasmussen: Well, we have not refused dialogue. On the contrary ...

Bob Simon: But you didn't meet with the Arab ambassadors.

But the newspaper editor, Toger Seidenfaden, has his own view as to why the prime minister didn't meet the ambassadors.

Why not meet them?

Toger Seidenfaden: Because sadly enough, in the domestic political situation in Denmark, the logic was simple. As conflict between the biggest newspaper in the land and religious Muslims? On whose side I am? It's very simple for a prime minister to answer. I'm with the big newspaper.

And that's exactly how the Muslim leaders understood it.

You are on record as defending the paper, defending its right to publish, and your critics have said that defending them so strongly has served to further inflame the Muslim world. What's your view on that, sir?

The Muslims felt totally rebuffed at home in Denmark so the imam sent a delegation to the Middle East with a dossier of pictures, not only of the published cartoons, but of other which were even more offensive. One showed the prophet with the head of a pig. Abu Laban told us he received these in anonymous threatening letters, but the dossier left the impression that those pictures had been printed in the newspaper.

I guess what I'm getting at, Imam, didn't you include these obscene cartoons as a way of really stirring up the pot?

Imam Abu Laban: We didn't give it to media. Don't forget this point.

Bob Simon: I'm the media and I have it.

It was the dissemination of that dossier which ignited the flames which are still burning today.

You weren't getting any attention here before you spread the word. Now you're getting attention and engagement. Do you think your mission was a success?

Bob Simon: And there are people dead in the streets. Do you think the casualties are worthwhile?

Imam Abu Laban: I feel sorry. We make cars and they make accidents. We build skyscrapers but they collapse in an earthquake. This is life. We have maybe unexpected tragedies and we have to live with them.

Meanwhile, Denmark was plunging into its deepest crisis, its only crisis, in more than half a century. Ever since the Second World War, the Danes have been pleased with their country, pleased with their generous welfare system, and above all, pleased with themselves. The lines between fantasy and reality aren't sharply defined around here. The elite troops guarding the royal palace look like toy soldiers. The national symbol is a bare-breasted mermaid luxuriating in Copenhagen's harbor. Those could be gingerbread houses lining Copenhagen's streets. It's the cosiest of kingdoms where even the runway models of Fashion Week, which was happening here while Danish embassies were burning, are all unmistakably Danish.

The Muslim quarter of Copenhagen is 10 minutes away from all this and on a different planet. Many Muslims say they have been made to feel like aliens. They may benefit from Denmark's welfare system but there isn't a real mosque in the entire country. They have to make do with converted factories. There may be a shwarma joint in downtown Copenhagen but there's no Muslim cemetery anywhere. These things deeply trouble Dr. Kamal Qureshi, the first Muslim immigrant to be elected to Denmark's parliament. He's troubled but he's not going anywhere.

Dr. Kamal Qureshi: This is my country. I love my country. I hate when people burn the flag. It hurts in my stomach and gut to see my kids get scared when they see the Danish flag burned. For God's sake, this is the flag we have on the tables when my children have their birthdays.

Muslims make up only 2 percent of the population, not much, perhaps, but enough to have spawned a backlash. Denmark now has the toughest immigration laws in Europe, and in the last five years, Danes have voted the ultra right-wing People's Party into the ruling majority. Since the cartoon controversy, support for this anti-Muslim party has grown to almost 20 percent.

Over the last few weeks, there has been a crisis in Denmark involving Danish people of Danish stock and Muslims. Do you think this crisis is going to make things better or worse?

Dr. Kamal Qureshi: I--being where I am, I have to be optimistic.

Bob Simon: You have to be, but what are you?

Dr. Kamal Qureshi: I'm scared. I think there are a lot of Muslims that are afraid that they could be turned into scapegoats and people would say that the reason that the world hate us is because you people are telling bad stories of Denmark. We have to take the ball away from the extreme groups in Denmark and put it in the middle where the rest of us are.

But that middle is fast disappearing into fantasies of fear. Many Muslims are afraid of being victimized. Many Danes are afraid their culture is under siege. Already, people with foreign values are converging on Denmark's national symbols. So what to do? If you ask those Danes responsible for the country's traditional image of civility and manners, a Dane like former foreign minister and newspaper editor, Uffe Elleman, he'll tell you that a little self-censorship is not always a bad thing.

Bob Simon: Is that what you think the newspaper was doing? Do you think they were deliberately provoking just to show that they had a right to do it?

Uffe Elleman: Yes, and I reacted very strongly because Muslims in Denmark, well, that's a minority, and you don't treat a minority that way. You don't stamp on other people's religious feelings. That's bad taste.

Freedom of speech vs. religious sensitivities. Conflicting forces which are doing battle everywhere. The Danes in their picture-perfect world may have thought they were immune. Now they know better.

How 60 Minutes reported on the September 11th terrorist attacks
Thanks for reading CBS NEWS.
Create your free account or log in
for more features.
View CBS News In
CBS News App Open
Chrome Safari Continue
Be the first to know
Get browser notifications for breaking news, live events, and exclusive reporting.